Rulers of the airwaves

The new film from director Richard Curtis, creator of Four Weddings and a Funeral and Notting Hill , looks back nostalgically to the days when a handful of pirate radio ships with vast radio transmitters bobbed about in the North Sea broadcasting to the UK. The BBC monopoly of the time meant that independent radio was illegal on UK soil; commercial broadcasts had to be illicitly beamed in from continental Europe, or from shipboard transmitters anchored around the British coast.
Set in pop's golden age of 1966-1967, The Boat That Rocked is about the fictional Radio Rock, a floating radio station whose roster of DJs live in clannish male conditions aboard a decrepit trawler. It's modelled on real-life pirates such as Radio Caroline and Radio London, which from their moorings several miles off the Essex coast beamed a constant diet of pop songs to as many as 25m people, half the UK population.
The pirates, launched by entrepreneurs, funded by advertising and staffed by irreverent young DJs, filled a vacuum left by the fusty BBC, whose meagre ration of one hour's pop broadcasting per week dismally failed to meet public appetite for the cascade of hits issuing from the Beatles, the Beach Boys, the Rolling Stones et al. It was, said Curtis at a screening this month, "the worst mismatch of supply and demand in history".
His comedy portrays life on a pirate boat as a boyish blast. Dolly birds are shipped in, dope is smoked, drinking games are played, banter is swapped, groovy tunes are played - while fuming little Hitlers in Whitehall struggle to wrest back control of the airwaves. Tony Blackburn joined Radio Caroline in 1964, several months after its launch, and went on to become one of the best-known figures in British broadcasting. He remembers his pirate days fondly. "Just terrific memories," he says. "What an adventure." Yet it was not the bacchanal depicted in the film. "There was nothing like that," Blackburn says, referring to on-board parties and shipments of girls. "It was run very professionally."
(continua)

Alrite guys and girls, the sounds of the swinging Sixties are set to be re-created by some of the orignal disc jockeys on board a ship in Harwich. Pirate BBC Essex moors up this Easter. 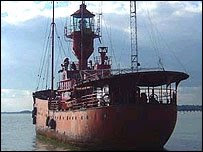 Legendary DJ’s Tony Blackburn and Johnnie Walker are just two of the original '60s offshore radio presenters who will be teaming up with BBC Essex for a celebration of that unique watery wireless sound. "In 2007 we told listeners it could be the last time for Pirate BBC Essex," said BBC Essex Managing Editor Gerald Main. "Ever since, fans from Essex and across the world have been asking us to do it one more time. We’ve been swayed by their wishes and their ship is literally coming in."
In 2007 and for the first broadcast in 2004, Pirate BBC Essex came from the LV18 half-a-mile off the Essex coast. This year, the vessel will be moored alongside the Harwich Ha’penny Pier.
"Thousands of '60s pirate radio fans will be able to get within a few feet of the fun action," said Pirate BBC Essex creator Steve Scruton. "It’s the 45th anniversary of the start of Radio Caroline but for fans of the offshore radio sound, it’s like yesterday," he said. Thousands of younger listeners were turned on to 60’s music by Pirate BBC Essex in 2004 and 2007 and thousands more are likely to join them once they’ve seen 'The Boat That Rocked'.
The film was written and directed by Richard Curtis and stars Bill Nighy, Rhys Ifans and Kenneth Branagh. "We’re really pleased that Universal used the LV18 for one of the most eagerly anticipated films for years," said Tony O’Neil of the Pharos Trust which owns the LV18. He adds: "To welcome Pirate BBC Essex back within days of the film’s release is just wonderful news."
The vessel’s bridge will be converted into a radio studio from where Pirate BBC Essex will broadcast on 729, 765 and 1530 MW and on www.bbc.co.uk/essex from 7 am on Good Friday April 10. "We’ll be playing those great pirate radio classics like Caroline and A Whiter Shade Of Pale," said Pirate BBC Essex programmes producer Tim Gillett. Tim is looking forward to spinning a few long lost gems: "Plus songs which may not have been heard for more than forty years like 'That’s The Way Love Goes' by Charles Dickens or 'Incense' by The Anglos. And after 'A Fine Fine Bird' in 2004 and 'Untrue Unfaithful That Was You' in 2007, I’m already thinking about a new record of the week." Presenters like Dave Cash and Roger Day, who’ll be appearing on Pirate BBC Essex this Easter, remember playing those songs for the first time on the pirate ships moored off the Essex coast between 1964 and 1967. Listeners will be able to also hear some of those '60s style radio jingles and that unique echo which was so reminiscent of those pioneering pop music radio days.