“Dear friends and listeners overseas,” says an effusively friendly voice through the loudspeaker. There is hardly need for it to add, in that faintly guttural English. “This is Germany calling.” 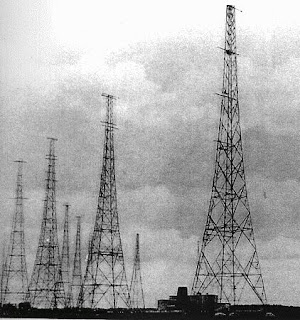 By night and day, with scarcely a break throughout the 24 hours, the German short-wave station at Zeesen – said to have cost £1,000,000 – is pumping out programmes to the world, with announcements and news in English, Dutch, Spanish, Portuguese, and, of course, German. The scale of its ceaseless activity is matched only by Daventry, the BBC Empire station, with the difference that the BBC uses English, German, Spanish, Portuguese, Arabic, Italian and French.
Today many countries speak to other nations through broadcasting – Italy, for instance, uses 20 different languages – but Britain and Germany have superior facilities and reach the widest audience. Daventry will shortly have five high-power transmitters in operation; Zeesen has six on regular schedules and two in reserve.
There is no more ironical comment on the world today than the growing Babel on the short-wave band. It is true that broadcasts by one country in the language of another are not in themselves hostile acts. Language is, after all, the only path to understanding among men and nations. But it is also the path to misunderstanding, and in 1939 motives and material need careful scrutiny.

CLUES OT IDENTITY
Day after day on the bewildering short-wave band the listener finds an English station talking German, a German station talking English, an Italian station talking Arabic, or a Russian station talking French. As a hair’s breadth on the dial separates one transmitter from another, the task of identification becomes infinitely tantalising, calling for the stoical patience of the angler.
The sort-wave listener is quite relieved to establish a recognisable contact – to come across such a phrase as “We are wishing you perfect reception,” which stamps the programme as made in Germany, or to hear that equally distinctive mark of identification, the voice of a typical B.B.C. announcer.
Germany was early in the field with foreign language broadcasts, beginning in 1934 and the B.B.C. followed suit only in January last year. When the short-wave transmissions for Zeesen were launched, it was stated in official German quarters that they were intended for people of German origin throughout the world.
One need look no farther than the much-quoted “Mein Kampf” for motives. In that work Herr Hitler makes plain his deep-rooted belief in propaganda, and freely acknowledges the superiority of the Allied methods during the war. Today, on all printed programmes distributed to the Press of the world by the German short-wave stations appears the declaration, attributed to the Fuehrer: “We wish to safeguard the eternal foundations of our existence, of our nationality, and the strength and virtues with which it is endowed.”

HOT NEWS IS COMPILED
Any British listener may hear for himself the evidence of Germany’s immense broadcasting effort. For example, at 5am daily, Greenwich time, half a dozen transmitters at Zeesen begin broadcasts to Africa, Southern and Eastern Asia, Australia and New Zealand. At midnight the same chorus is turned on the Americas.
What, then, is Germany telling the world with such characteristic thoroughness, and what is its effect on the scattered audience? To find the answer to these questions I have been listening regularly to the Zeesen transmissions in English for some time.
The favourite method of the compilers of the Zeesen bulletins is to comb the newspapers of the world and to quote carefully selected extracts. For instance, one day quotations were read from an Arab newspaper to the effect that the object of the Palestine Conference in London was to strengthen Britain’s grip on the Orient and the Arab States. “Britain,” the article went on, “intends to show the world that she is master in the Orient and plans to throw the apple of discord among the representatives of the Arab States in London. Various questions apart from the Palestine issue, are to be raised in order to set off one party against another.”

QUOTING FROM AMERICA
The report in a London newspaper that the Jews in Palestine threatened an armed revolt if the conference failed was mentioned one day. As a departure from this method, another bulletin contained some isolated sentences to the effect that on the occasion of a religious festival “an unfortunate invalid Arab was hanged. He was condemned to death because an old rifle was found in his possession.”
Reports from French newspapers of Anarchist atrocities in Catalonia have been freely quoted, and I have heard lengthy extracts read from criticisms of B.B.C. news bulletins published in a London newspaper.
A recent Zeesen bulletin began with a report of a broadcast given by “the well-known American publisher, Randolph Hearst.” It was, said the announcer, a sharp attack on the Roosevelt administration; Mr Hearst, it was said, took particular exception to the statement that it was the duty of the United States to defend democracy and treaty loyalty all over the world. Mr Hearst asked whether Mr Roosevelt intended to convert Soviet Russia to Christianity or how he reconciled his humanitarian arguments with the brutal oppression of 300,000,000 Indians and the slaughter of many innocent inhabitants of that country. Similar sentiments, continued the announcer, had been expressed by Senator Walsh and Col Theodore Roosevelt.

DENUNCIATION OF JEWS
More direct methods are used to castigate the Jews and the Spanish “Reds” though lately there has been a lull in the attacks on the Jews. I heard a talk one morning on Spain devoted largely to an account of the ruthlessness of the “Jewish” inquisitor Torquemada, who, the speaker said, had caused the death of thousands of innocent Aryans. Denunciation of the Jews for anti-German “conspiracies” has occurred frequently.
Last Sunday Zeesen had turned its verbal guns on to Washington, which the announcer chose to describe as the centre of a world-war agitation. “These attacks on the authoritarian States,” he continued, “are intended to counterbalance the Bolshevik defeat in Spain.”
The announcer then went on to denounce Senator Pittman’s “absurd” assertions in his recent speech and supported his criticisms as usual with quotations taken from the American Press. On the whole, however, Zeesen broadcasts are not violent in tone, and the propaganda pill is sugar-coated. There are no outspoken attacks on Britain or the democracies. But in the news bulletins and talks political bias is very apparent. The B.B.C., in spite of its ideal of objectivity, is sometimes accused in this country of tendentiousness one way or another. There can be no question that tendentiousness is far more obvious in the Zeesen broadcasts.
The Spanish Government forces are consistently described as “Reds”, Marxists, or Bolsheviks. Dr. Negrin and Senor del Vayo are called the “Soviet” leaders. Mr. Eden and Mr. Churchill are called “those anti-German politicians” and so on.

CONCERTS AND DRAMA
Making due allowances for national tendencies, there is nothing very remarkable in the choice of contents for the bulletins from Zeesen. Recently they have consisted chiefly of accounts of the rout of the “Reds” in Catalonia; difficulties in the disposal of Spanish refugees; reported atrocities by the Spanish “Reds” and attempts by the Russians to send in arms and munitions; allusions to German industrial activity, and so on.
News bulletins form only a fraction of the Zeesen output. Concerts, musical programmes of all kinds, and radio drama, including Shakespeare and detective plays, and German language lessons are also broadcast. I heard a discussion the other day designed to advertise the facilities offered at Munich University for foreign students. Particular emphasis was laid on the statement that absolutely free expression of thought was allowed in debates at the International Students’ Club. “Many of our listeners may not be aware that free and frank discussion really exists in Germany today,” observed the compère.
Two American students were brought to the microphone to say how much they enjoyed life in Munich. One of them remarked, rather ambiguously, I thought, that it was a fine city, and everything his hearers had heard about it in America was true.

CONTRAST IN METHODS
The German announcers speak extremely fluent English but adopt an ingratiating, almost gushing style which falls a little uneasily on English ears. Some of them have an Australian accent. On the other hand Zeesen is much more intimate and personal in its methods than the B.B.C. and it may be that the British programme-makers could learn something on this score. Overseas listeners are encouraged to write to Zeesen; their letters are quoted, their names mentioned, and their questions are answered at the microphone. American towns have special programmes dedicated to them.
But nobody who has listened regularly to German short-wave broadcasting can fail to wonder whether it is producing results commensurate with the effort and expenditure. The instincts of the impartial listener must, I should think, inevitably lead him to the bulletin which, both in composition and presentation, shows the smallest traces of prejudice and suppression. Judged by these standards, I find the B.B.C. bulletins incomparably better and my preference applies not only to the B.B.C. bulletins in English but also to those in German.