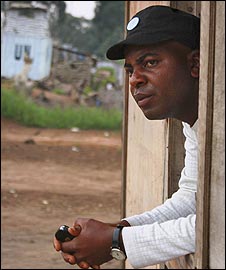 At 0500 on a mountaintop in the forests of eastern Democratic Republic of Congo, Michel Sibilondire struggles to start his generator.
As it finally chugs to life, Mr Sibilondire points to the trees in the distance, still shrouded in mist.
"One kilometre from here you will start to see them in ones and twos, and if you keep going for about 30km, you will come to the place where the FDLR have been living for years and years," he says.
The FDLR are the Democratic Forces for the Liberation of Rwanda - a Rwandan Hutu rebel group whose existence in the DR Congo can be traced back to the 1994 Rwandan genocide which, it is thought, some of its members helped perpetrate.
Since then, they have hidden in the country's forests and, along with other militias, continue to threaten the stability of the region.
Mr Sibilondire's job is to get them to go home.

Each morning, the 36-year-old powers up a small United Nations radio transmitter and starts broadcasting from his mountain shack in North Kivu.
His antenna points directly at the rebels in the bush. They know him by his call name - Mike India.
After living through a decade of conflict with his wife and two children, he was hired in 2006 by the UN to be what he calls a "radio host for peace".
He broadcasts in four languages and in between spins of Rwandan and Congolese pop hits and American country music, he announces the latest developments in the UN's demobilisation programme.
The programme has been running for four years now and has met with some success as more than 5,000 of the FDLR have returned to Rwanda.
But judging by the mood at a January peace conference in Goma, the roughly 7,000 rebels that remain will not be welcome in the country much longer.
So these days Mike India's message to the rebels is simpler than ever - go home or be killed.
Earlier this year the UN Security Council demanded that "all members of the FDLR... and other Rwandan armed groups operating in the [east] immediately lay down their arms" and surrender to the UN for repatriation to Rwanda. Any delay, and UN soldiers were authorised "to use all necessary means" to support operations by the Congolese military to remove the Rwandans by force.
Over the past few months, the army has deployed to FDLR-occupied zones of North Kivu in preparation for a fight, effectively to fight the rebels on their own turf.
Mike India is hoping it does not get to that point.
"It is impossible to get the FDLR out of the DR Congo by force," he says.
"It will backfire. It will be very bad for the Congolese people."

Philip Lancaster, who runs the UN's demobilisation programme in the country, says the unprofessional state of the Congolese army - who have fought side by side with the FDLR in the past - will make protecting civilians a challenge during any military action.
"Because of the integrated way in which the FDLR have taken up residence in the Congolese communities, the kinds of actions that need to be taken are more along the line of police action than military," Mr Lancaster says.
He believes the main problem is fear, which is "so deeply embedded in their psyche that finding a way past it is a real challenge.
"They are still absolutely convinced that if they go home to Rwanda today they will be killed or imprisoned or humiliated in some way," he explains.
If the rebels participated in the genocide they will face justice in Rwandan courts - but the number who actively perpetrated genocide is believed to be only around a dozen, as most of the current fighters are believed to have been children in 1994.
So when Mike India goes on the air he fills his broadcast with reassuring messages about peace, safety and the demobilisation package of money, training and other basic support.
Then, every so often, he reads out his phone number. Between the hours of 0100 and 0400 - when mobile calls are free - his phone is deluged.
Some rebels want to know where to demobilise, others rant about Paul Kagame, the current Rwandan president and former Tutsi rebel leader. Some just want Mike India to play different music.
They give a real insight into the rebels' mentality.

"Hello Mike India!" one SMS in Swahili reads. "We are with the FDLR - I am a captain in Rusamambo. When God wishes, we are ready to return to Rwanda."
Seconds later, another message comes from a Congolese citizen: "Congratulations! Keep telling the FDLR to leave our country and return home. We are tired of them. They attack us. They steal, they burn our vehicles and if they return it will be good thing."
Getting the rebels to lay down their weapons is all about building trust, and personal appeals seem to work best.
But the process is slow - about one or two ex-combatants are moving through the UN's transit camps each day.
And Mike India knows he does not have that much time.
Tensions are growing between the FDLR and the Congolese army as it deploys throughout the region. These days he is broadcasting at least 10 hours a day and he is sleeping with his transmitter.
"I am working to win these guys over," he says, after signing off and cutting his generator at 2200. "This is my contribution to the reconstruction of the country."