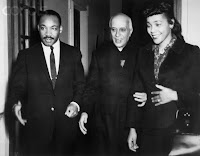 A few days before the Martin Luther King, Jr. Birthday Holiday in the U.S., researchers in India have rediscovered an electrifying message that Dr. King taped at the conclusion of his historic 1959 visit. The message underscored the legendary civil rights leader’s intellectual debt to Mahatma Gandhi and foreshadowed Dr. King’s deep commitment to “nonviolent resistance” in the civil rights movement yet to come.
The legendary American civil rights leader, assassinated in 1968, would have been 80 this month.
The message, found by the staff of All India Radio, is a rare historical document. “Since being in India,” Dr. King said, “I am more convinced than ever before that the method of non-violent resistance is the most potent weapon available to oppressed people in their struggle for justice and human dignity.”
Speaking at the height of the Cold War, Dr. King’s message called for universal military disarmament and warned of war’s growing threat to human civilization. “Today we no longer have a choice between violence and non-violence,” he said. “It is either non-violence or non-existence.”
In February, 1959, Dr. King and Coretta Scott King traveled in India in search of the roots of the nonviolent social action movement which led to Indian independence -- studying Mahatma Gandhi’s ideals and meeting his followers around the country. Upon return to the United States, the civil rights movement led by Dr. King and others helped transform American race relations, drawing on Gandhi’s philosophy.
A delegation led by Martin Luther King III, with planned participation by members of Congress, legendary musicians and other distinguished Americans, will meet with counterparts in India next month to underscore the enduring importance of these two great leaders.

Leaders in and out of government, organizations, particularly the Gandhi Smarak Nidhi and the Quaker Center, and many homes and families have done their utmost to make our short stay both pleasant and instructive. We have learned a lot. We are not rash enough to presume that we know India, vast subcontinent with all of its people, problems, contrasts and achievements; however, since we have been asked about our impressions, we venture one or two generalizations.
First we think that the spirit of Gandhi is much stronger today than some people believe. That is not only the direct and indirect influence of his comrades and associates, but also the organized efforts that are being made to preserve the Mahatma’s letters and other writings, the pictures, monuments, the work of the Gandhi Smarak Nidhi and the movement led by the sainted Vinoba Bhave. These are but a few examples of the way Gandhiji will be permanently enshrined in the hearts of the people of India. Moreover, many governmental officials who do not follow Gandhi literally apply his spirit to domestic and international problems.
Secondly, I wish to make a plea to the people and government of India. The issue of world peace is so critical, that I feel compelled to offer a suggestion that came to me during the course of our conversations with Vinoba Bhave. The peace-loving peoples of the world have not yet succeeded in persuading my own country, America, and Soviet Russia to eliminate fear and disarm themselves. Unfortunately, as yet America and the Soviet Union have not shown the faith and moral courage to do this. Vinobaji has said that India, or any other nation that has the faith and moral courage, could disarm itself tomorrow, even unilaterally.
It may be that, just as India had to take the lead and show the world that national independence could be achieved non-violently, so India may have to take the lead and call for universal disarmament. And if no other nation will join her immediately, India may declare itself for disarmament unilaterally. Such an act of courage would be a great demonstration of the spirit of the Mahatma, and would be the greatest stimulus to the rest of the world to do likewise. Moreover, any nation that would take such a brave step would automatically draw to itself the support of the multitudes of the earth, so that any would-be aggressor would be discouraged from risking the wrath of mankind.
May I also say that, since being in India, I am more convinced than ever before that the method of non-violent resistance is the most potent weapon available to oppressed people in their struggle for justice and human dignity. In a real sense, Mahatma Gandhi embodied in his life certain universal principles that are inherent in the moral structure of the universe, and these principles are as inescapable as the law of gravitation.
Many years ago, when Abraham Lincoln was shot – and incidentally, he was shot for the same reason that Mahatma Gandhi was shot for; namely, for committing the crime of wanting to heal the wounds of a divided nation. And when he was shot, Secretary Stanton stood by the dead body of the great leader and said these words: “now, he belongs to the ages.” And in a real sense, we can say the same thing about Mahatma Gandhi, and even in stronger terms: “now, he belongs to the ages.”
And if this age is to survive, it must follow the way of love and non-violence that he so nobly illustrated in his life. Mahatma Gandhi may well be God’s appeal to this generation, a generation drifting again to its doom. And this eternal appeal is in the form of a warning: they that live by the sword shall perish by the sword.
We must come to see in the world today that what he taught, and his method throughout, reveals to us that there is an alternative to violence, and that if we fail to follow this we will perish in our individual and in our collective lives. For in a day when Sputniks and explorers dash through outer space and guided ballistic missiles are carving highways of death through the stratosphere, no nation can win a war.
Today we no longer have a choice between violence and non-violence; it is either non-violence, or non-existence.