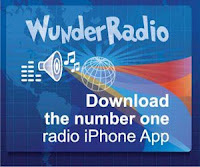 There's no shortage of streaming radio apps for mobile phones, but lately it seems that far more have been readied for the iPhone than for Windows Mobile. On Thursday, Wunder Radio, already a popular iPhone radio app, also became available for Windows Mobile phones.
It may not be the prettiest radio app out there, but Wunder Radio packs in a ton of stations provided by Radio Time, around 36,000. The stations span everything from talk radio and Weather Underground's local weather reports to the browsing, searching, and genre-scouring you'd expect from a streaming radio application. The search engine, we might add, is sensitive to radio show and show host names in addition to station names and call letters. If your smartphone or Pocket PC is GPS-enabled, Wunder Radio can fetch some of your local stations.
Wunder Radio's extras are also serviceable--you'll be able to save and view favorites, stream stations in the background, and open a URL from the application. In addition to the standalone application, Wunder Radio installs a home screen plug-in onto most phones (our Samsung Omnia's default theme blocked this) that streams program and song information and offers a shortcut to favorite stations.
Price may be the only major sticking point with Wunder Radio. The Windows Mobile version costs just shy of $10 as part of a 30-day promotion, after which the app's price shoots up to $14.99. While competing radio applications like Pandora for Windows Mobile don't have the breadth of Wunder Radio's stations, or even its goal (Pandora Radio is concerned with music discovery, not with talk radio and finding particular stations), Pandora's free application may satisfy many music-seekers. For those with more specific tastes, Wunder Radio's broad tuner gives you a good chance of finding what you seek. A free, 15-day trial period gives you time to bond with the app, after which you'll decide if you're ready to buy.

Note: As it goes with streaming radio apps, faster data connection speeds through 3G and Wi-Fi produce the best sound, with fewer interruptions and skips.

Update 2/19/09 at 5:00 PM PT: Wunder Radio does not fully support phones with a WQVGA resolution. These phones should still receive audio, but may not display images. Jeyo, the company that developed Wunder Radio for Weather Underground, told us that support for these phones will be added next.