As it happens, radio translates well onto paper 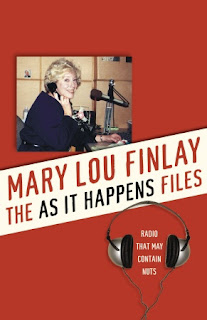 By design CBC Radio's As It Happens – after the network's Ideas, the world's longest-running radio program – is the ultimate listening adventure.
Limited only by the imagination of its producers and hosts, the phone-out show reaches around the world every day to interview – via the crudest and most commonplace communication device, the telephone – newsmakers, local heroes and nutters, politicians, pundits and fools, mountain climbers, sailors and astronauts, talking dogs, sports stars, tricksters and brain surgeons.
It produces auditory snapshots of characters and events that are in turn thrilling, touching, hilarious, dramatic, informative, sometimes downright frightening, and above all, immediate. It is perfect radio.
That the concept might not work so well as non-fiction literature apparently never occurred to Mary Lou Finlay, the veteran broadcast journalist who hosted the program with Barbara Budd from 1997 through 2005.
As it happens, her The As It Happens Files (Knopf Canada), published last week, is more than a gripping condensation of Finlay's favourite interviews and reminiscences. It's also an enlightening historical document, a testament to her appetite for a great yarn, and evidence of her sharp wit and keen journalistic sensibilities.
"I never kept notes while I was on the show," she told the Star. "So when I decided to write this book, I just dug into the CBC archives, through 10,000 interviews, most of them on 7-inch reels of tape, starting with the moments I treasured – they're the core of the book.
"I used the online logs of the show as a map. And each program I listened to reminded me of six others. I just kept going till I ran out of time."
The book reveals Finlay's empathy with ordinary people who find themselves in extraordinary circumstances, like the 80-year-old Miami lawyer who survived a 20-hour ordeal in the open sea after losing his boat, and Canadian harmonica virtuoso Mike Stevens, who stumbled upon a heartbreaking Canadian tragedy, the lost native children – gas-fume addicts – of remote Sheshatshiu, Labrador, and offered them hope and spiritual sustenance through music. She has a thing for battlers and oddballs, too, like the Coquitlam, B.C., businessman who spent $120,000 fighting a traffic ticket; a Hamilton inventor who spent years trying to perfect a Kodiak bear-proof armoured suit; and a British woman who set up a sanctuary for garden gnomes.
Finlay's commentary and written introductions to the selected interview segments have the same easy, almost whimsical conversational style that is As It Happens' stock- in-trade. And it's not all light and breezy reading. Her essay on the whys and wherefores of the Air India disaster and the failure of authorities and the government to investigate and prosecute is a marvel of intellectual clarity and plain-spoken common sense.
"There's a lot I had to leave out, mostly for space reasons," said Finlay, adding she'd "like to commit more journalism in the future.
"We went on a rant once on As It Happens about declining literacy, and about the abuse of grammar, and the misplaced apostrophe. The radio audience loved it, but on paper it was too pedantic.
"Writing a book, I have learned, is hard and lonely work. This experience has almost killed the passion I once had for writing. I found myself doing strange things, like washing the windows, to avoid it. But when the deadlines loom, and I forced myself to start writing, all the doors opened, and it was wonderful."
40 YEARS ON AIR

Created 40 years ago this month by then-CBC producer, the late Val Clery, a former British army paratrooper, As It Happens started as CBC Radio's desperate response to television's ascendancy in the news and information business, airing at first on Monday nights, in a series of two-hour segments that rolled across Canada's five time zones. It was a brave and dazzling concept, Clery used to say, that left its producers, researchers and lead-runners exhausted after every marathon.
A short time later, the show's success spawned Radio Free Fridays, with the late Peter Gzowski as host, but in the early 1970s, with the late Barbara Frum and Cy Strange as co-hosts, the two programs merged, and As It Happens took the shape and frequency (90 minutes, five nights a week, starting at 6.30 p.m.) and style (a heady mix of hard news follow-up, humour, music and irreverence) that would make it unassailably popular and the envy of broadcasters the world over.
As It Happens is celebrating its 40 years on air through this month. Tomorrow's subject is 40 years of Reading, and the reasons this obscure British town been for so many years one of As It Happens' weirder obsessions.
On Tuesday night, the actual anniversary, current and former members of the crew pull back the curtain and share stories from behind the scenes.
And in coming days, regular listeners will be invited to share memories about their favourite interviews from over the years.