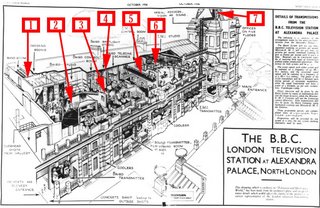 Seventy years ago today the first ever television broadcast was made from Alexandra Palace.

"This is direct television from Alexandra Palace," were the immortal words uttered by presenter Elizabeth Cowell on November 2, 1936, as the first official television broadcast beamed across a 30-mile radius and into approximately 40 homes. For the next 50 years, the BBC used two studios in the east of the palace to broadcast to the nation, including historic events such as the 1937 coronation of King George VI and the 1953 coronation of Elizabeth II. Transmission was halted briefly during the Second World War, but the palace's transmitter was modified and used to jam the German aircraft navigation system, causing bombers destined for London to drop their payload on the empty fields of Kent. Today, the studios are not in use since the departure of the BBC in 1981. With the proposed sale of the palace to Firoka (Heythrop Park) Ltd in its latter stages, there has been no guarantee that the original studios will be kept.
John Trenouth was the senior curator at the National Museum of Photography, Film and Television for 20 years and is currently working with the BBC on a show about the studio's anniversary. He said: "It is the birthplace of TV, it is where it all began. It is where what was once science fiction became science fact. It is part of our heritage." While Scottish pioneer John Logie-Baird had been transmitting images since January 1926, for half an hour at a time in the evenings, his 30-line images were crude. By the mid-1930s, more than 50 different inventors and companies in 11 different countries had already tried to overcome the problems posed by a practical television system.
The British government was keen to develop a high-definition system, a minimum of 240 lines and 25 frames, and so in 1934 set up the Selsdon Inquiry (also known as the Television Advisory Committee). Its eventual decision, that there would be a high-definition television service run by the British Broadcasting Corporation, was the first attempt at television regulation. Alexandra Palace was chosen as the best location, because transmission needed to take place at 600 feet above sea level and the palace, at 300 feet above sea level, only required the building of a 300-ft tall tower to be suitable. In 1936 the BBC hosted trials between the EMI-Marconi and Baird television systems to decide which would carry the television standard for the future. Studio A was equipped with the Marconi-EMI Emitron system, while Baird installed his mechanical system in Studio B.
It was decided that the two systems would run side by side, alternating weekly, under evaluation for six months, after which a permanent system would be chosen. "In true British style a coin was tossed to decide who would go on first that night," Mr Trenouth said. "The Baird system won, did its transmission, and then there was tea and scones and then the second transmission went out." Marconi-EMI won the competition and became widely regarded as the first high-definition television service in the world. Mr Trenouth said: "There were teething problems and mistakes were made, as you would expect, but those early engineers were true pioneers of television. One of the big things was that the transmitter should never have been in the same building as the studios because of the sensitivity of the equipment. Apparently in the BBC canteen, if you let your knife and fork touch, little blue sparks would fly."
The service consisted of mainly live programmes for two hours a day, from 3pm to 4pm, and from 9pm to 10pm, except for Sundays. Output grew through the Fifties and Sixties before the news service moved in the Seventies. The BBC continued to produce television programmes at Alexandra Palace for the Open University until 1981, when the university moved to Milton Keynes. It was at this point that the equipment was stripped from the rooms. The Alexandra Palace and Park Charitable Trust took on ownership of the palace in 1988 with Haringey Council in charge of administration.
Mr Trenouth said: "In a way, the studios have survived through a quirk of fate so far, but I don't think future generations will forgive us if they are lost forever. I visited them for the first time 19 years ago and it was a real moment with the hairs of my neck going up. It is like they are frozen in time and to stand there, where it happened, I think it is something that should be available to the public." Firoz Kassam, the managing director of Firoka, is keen to point out that a television museum will be somewhere within the palace, but the maintenance of the original studios cannot be promised. He also added that no definite plans can be made until contracts are exchanged. Liberal Democrat councillor Bob Hare, one of seven on the board of trustees, said: "I understand that they are in an unusable state, so they need work, but could be converted into a restaurant or cafe but with the actual structure intact."
An Alexandra Palace spokesman said: "Before any building work can be done to the palace, there will need to be a planning process including a public consultation and, at the consent of English Heritage, in concern of the building's listed status. Neither of these processes can start until contracts have been exchanged between the trust and Firoka. "It is therefore not possible to say beyond what was in Firoka's early plan and whether and how public access to the broadcasting studio's is guaranteed."
There are to be no official celebrations today for the 70th anniversary but a small group of enthusiasts, including Mr Trenouth, plan to gather beneath the transmission tower to mark the day. He added: "I understand the financial needs of a developer but I would hope that the historical value would be appreciated and some vestige of the original studio is kept."