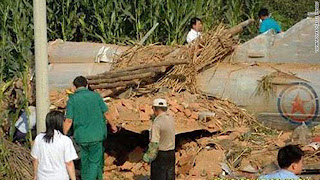 North Korea says it has joined Twitter, YouTube
By SANGWON YOON
THE ASSOCIATED PRESS
Published: Aug. 17, 2010
North Korea appears to have ramped up its propaganda war against South Korea and the U.S. by turning to Twitter and YouTube — websites that most citizens of the reclusive communist country are banned from viewing. The North's government-run Uriminzokkiri website posted an announcement last week saying it has a Twitter account and a YouTube channel.
More than 80 videos have been uploaded since July to the global video-sharing site under the user name uriminzokkiri. The series of clips include condemnation of "warmongers" South Korea and the U.S. for blaming North Korea for the sinking of a South Korean warship in March.
In May, an international team of investigators found North Korea responsible for the sinking, which killed 46 South Korean sailors, but the North denies involvement.
"Those who enjoy setting flames of war are bound to burn in those very flames," a narrator says in one video. A clip titled "Who will win if North Korea and the U.S. fight?" claims the North possesses nuclear fusion technology. North Korea said in May that its scientists succeeded in creating a nuclear fusion reaction, but experts doubt the isolated country actually has made the breakthrough in the elusive clean-energy technology.
Another clip calls the South Korean foreign minister a "pro-American flunky" who should make his living by "mopping the floors of the Pentagon."
The Twitter account, which opened last Thursday under the name uriminzok, which means "our nation" in Korean, has garnered more than 3,000 followers in less than a week. As of Tuesday uriminzok tweeted 11 links to Uriminzokkiri reports that threaten "merciless retaliation" against South Korea and the U.S. and call South Korean President Lee Myung-bak's administration a "prostitute of the U.S."
South Korean Unification Ministry spokeswoman Lee Jong-joo said Tuesday the ministry could not confirm whether the accounts were linked to the North Korean government, though the feeds carried the same reports as North Korea's state media.
In Washington, State Department spokesman P.J. Crowley said Tuesday that the U.S. welcomed North Korea to the social media forums but challenged its authoritarian leaders to allow its citizens full access to the sites, as most other governments do.
North Korea, one of the world's most secretive countries, blocks Internet access for all but the elite among its 24 million citizens but is believed to have a keen interest in information technology. Crowley noted that Pyongyang had underestimated the power it had unleashed.
"The Hermit Kingdom will not change overnight, but technology once introduced can't be shut down. Just ask Iran," he said. He was referring to unsuccessful attempts by the Iranian government to cut off access to social networking sites that opposition groups used to organize support during unrest that followed disputed elections last year.
The Uriminzokkiri website, which is run by the Committee for the Peaceful Reunification of the Fatherland in Pyongyang, is blocked in South Korea, with a government warning against "illegal content" popping up instead. Currently 65 North Korean-run and pro-North Korean websites are blocked by the South's Korea Communications Standards Commission for carrying content that violates South Korea's national security and information and communications network laws, said Shim Joo-hyung, a spokeswoman for the commission.
"Uriminzokkiri is banned for carrying content that glorifies, praises or encourages an organization against the state, and thereby instilling social fear and anxiety," Shim said.
She could not further discuss what the 65 websites were, as it is illegal to discuss and name sites that have been banned. South Koreans are wary of attempting to access such blocked sites because they could face up to seven years in jail if caught. Shim said the commission cannot comment on whether it will take action to block the Twitter and YouTube accounts, though she said it is possible to block them. "We wouldn't block Twitter or YouTube entirely, just the specific accounts," she said.
Associated Press Writers Kwang-tae Kim in Seoul and Matthew Lee in Washington contributed to this report.
Online:
http://www.twitter.com/uriminzok
http://www.youtube.com/user/uriminzokkiri