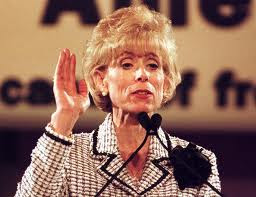 August 17, 2010
Dr. Laura Schlessinger to End Radio Show
By ANAHAD O'CONNOR
Dr. Laura Schlessinger, the conservative talk radio commentator under fire for repeatedly using a racial epithet, announced on Tuesday that she was ending her long-running radio show.
Dr. Schlessinger made the announcement on Tuesday night on “Larry King Live,” saying she made a decision not to renew her contract when it expires at the end of the year and suggesting that she did not want her opinions and language, however provocative, to be muzzled.
“I want to regain my First Amendment rights,” she said. “I want to be able to say what’s on my mind and in my heart and what I think is helpful and useful without somebody getting angry, some special interest group deciding this is the time to silence a voice of dissent and attack affiliates, attack sponsors. I’m sort of done with that.”
But she stressed that she was not retiring, only ending her show, and would continue to write books and appear at speaking engagements.
“I’m not quitting,” she told Larry King. “I feel energized actually — stronger and freer to say the things that I believe need to be said for people in this country.”
No stranger to controversy, Dr. Schlessinger has been under intense pressure in recent days following an exchange with a caller on her radio show last week in which she used the racial epithet — the so-called N-word — 11 times. The caller, a black woman, was complaining that she was married to a white man whose friends and family members frequently made racist comments in her presence. Dr. Schlessinger responded by arguing there was a “confusing” double standard — that blacks could use the epithet freely while whites could not.
“If anybody with enough melanin says it, it’s a horrible thing; but when black people say it, it’s affectionate,” she said. “It’s very confusing.”
Even after the caller complained — “I was a little caught back by the N-word that you spewed out, I have to be honest with you” — Dr. Schlessinger repeated it a number of times, insisting her caller had “too much sensitivity.”
A day later, as the show was generating controversy on blogs and cable news shows, Dr. Schlessinger issued an apology on her blog. She also read it on her radio show.
“I was attempting to make a philosophical point, and I articulated the ‘n’ word all the way out — more than one time,” she said. “And that was wrong. I’ll say it again — that was wrong.”
The apology, however, only generated more attention to the original comments, prompting Dr. Schlessinger to appear on CNN to make her announcement Tuesday night.
Shortly after Dr. Schlessinger made her announcement, one of the groups that had called for advertisers to back away from her show, Media Matters for America, issued a statement applauding the outcome.
“Dr. Laura’s radio career ended in disgrace tonight because of the bigoted, ugly and hateful remarks made on her show. Americans have had enough,” the group’s president, Eric Burns, said in the statement. “Listeners are now holding hosts, affiliates, and sponsors accountable for the offensive and inexcusable content on the airwaves.”
In her three decades on the radio, Dr. Schlessinger’s popular show — at its peak it was the second highest-rated radio show after The Rush Limbaugh Show — has come under fire from rights groups a number of times. In 2000, a coalition of gay activists launched a Web site, StopDrLaura.com, and organized protests and boycotts across the United States and Canada in response to her comments about homosexuality, which she referred to as a “biological error.” They were also angered by her outspoken stance against adoption by same-sex couples, and remarks in which she said that a “a huge portion of the male homosexual populace is predatory on young boys.”
Dr. Schlessinger apologized for many of her comments, but many of her advertisers left her radio show, and a television show she started in 2000 was ended a year later. On the Web site StopDrLaura.com Tuesday night, a headline at the top of the home page declared, “We Stopped Dr Laura.”