Next week's NAB Radio Show (Philadelphia, PA, September 23-25, 2009, www.nabradioshow.com) provides a perfect opportunity to showcase some of the results from the NAB FASTROAD HD Radio electronic program guide (EPG) project. Through the FASTROAD (that's Flexible Advanced Services for Television and Radio On All Devices, www.nabfastroad.org) technology advocacy program, NAB has been funding the development of business requirements, system architecture and specifications of an HD Radio-based EPG for local radio broadcasters (see the August 3, 2009 issue of Radio TechCheck for additional information on this project).
In the Radio Show exhibit hall (booth 310), the project team of BIA Advisory Services (Chantilly, Va. www.bia.com), Broadcast Signal Lab (Cambridge, Mass., www.broadcastsignallab.com), and Unique Interactive (London, UK, www.uniqueinteractive.co.uk) will be demonstrating various aspects of the HD Radio EPG system which they have developed. Four specific demonstrations will be available (see diagram below):

* EPG service bureau demo - a number of the EPG system "models" developed by the FASTROAD project team involve use of a "service bureau" which collects EPG data from stations on a market-wide (or broader) basis, then organizes this data and sends it back to the stations in a format suitable for transmission over the HD Radio advanced data services channel. In the booth at the show, a demonstration of the EPG service bureau interface located at the radio station will be given, highlighting how the station uses/edits the EPG database, then uploads this data and other necessary parameters to the service bureau;

* Remote link to Boston field trial - since July of this year, a live EPG field trial has been underway in the Boston, Mass. radio market. Stations from the markets adjacent to Boston, including Worcester, Mass. and Providence, R.I. are also involved, showing how an HD Radio EPG can serve listeners as they travel. At the show, a live EPG monitor running on a computer in Boston will be mirrored to the Radio Show booth via remote desktop connection, showing EPG data received off-air from the field trial. This demo highlights what is called the "shared" EPG model, in which one or more "bearer" stations transmit EPG data for all other participating stations into the market;

* EPG transmitter/receiver demo - an HD-Radio Importer and transmitter will be in the booth, connected to a dummy load and feeding a signal (with EPG data) directly into two receivers an iBiquity EPG-enabled prototype receiver (a PC peripheral implemented on a printed circuit board) and a prototype EPG-enabled portable HD Radio receiver being developed by consumer electronics manufacturer Cydle Corp (www.cydle.com). Here, the "parochial" model of EPG service will be highlighted, in which each station transmits only its own EPG data, including all multicast services the station may carry;

* EPG Web browser demo - in addition to the over-the-air broadcast of EPG data using the HD Radio advanced data services channel, the Boston field trial also includes a demonstration of how local station EPG information can be made available over the Internet for display on a PC or a Web-connected mobile device (such as an iPhone). Shown in the booth will be PC and iPhone Web-browser displays of EPG data from an EPG service bureau Web server. This demonstration highlights one aspect of the "network" EPG model whereby a general EPG resource on the Internet is filtered by information about the listener's location, so that the device being used to obtain the EPG information (in this demo, the PC and iPhone) can obtain localized EPG data from a master database. 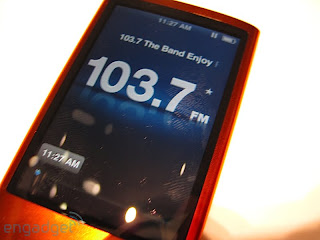 Just when you think there’s nothing interesting you can blog about, Apple come and chuck fresh meat to the wolves.
Of course, everyone’s excited about Apple including radio in one of their devices for the first time. That’s clearly good news. It would be amazing news if it was a DAB Radio in Europe, and an HD Radio in the States, but let’s work on that one. Baby steps.
Let’s assume that Apple don’t incorporate functionality into their devices unless they think users are going to go “wow – cool”. As Mark Ramsay says, Apple didn’t just throw an FM tuner in there; they “enhanced radio”, so it includes pause/rewind and tagging. Adding this kind of functionality costs real money (in material and engineering time), so we should be pleased that Apple see that as a worthwhile investment. Yes, Radio is still cool, and still valued even by the cool kids who buy Apple iPod Nanos. This is a “radio” that 15-24s will love to have.
James explains a bit about how the existing Apple iTunes Tagging works. It’s a system designed to do one very specific job, for one specific group of stations and listeners. It transmits Apple iTunes Catalogue IDs in spare RDS ODA (Data) groups, using a form of encryption (discuss…). The radio station incorporates the iTunes IDs into their FM RDS transmission, the iPod Nano receives/decodes this, and when you hit “Tag” it stores the ID/Artist/Title in memory. When you sync up your Nano with iTunes, iTunes converts that into proper store links, and offers you the downloads. It works. Listeners can tag songs on the radio, and buy them in iTunes. A similar service is also available on HD Radio, and was launched earlier, IIRC.
So what’s not to like. Isn’t this the perfect demonstration of innovative revenue generation in a digital media world?
Maybe, but I don’t think it was initially designed with the listener in mind. It looks like a system designed to turn radio listeners into Apple iTunes customers. There’s nothing wrong with that, incidentally. The rather depressed radio business got a big kick out of being able to announce a tie-up with Apple, who are highly regarded. There’s significant kudos is being allowed to play with the smartest boys on the block.
James has pointed out the weaknesses in the existing system. It doesn’t scale terribly well (although I believe either FM or HD have also started parallel transmission of Amazon IDs for their MP3 store?), and it only works for iTunes and material that’s in iTunes.
There another weakness in the system, in my opinion.
If you look at how the meta-data moves around, it goes in one direction only. From the radio station, via FM, the Nano, iTunes and to Apple. After the radio station has splurged the meta-data out on the broadcast platform, it has no control or visibility of it from that point onwards. There has to be a contractual relationship between Apple and each Radio Station for Apple to pass information about the songs sold back to the radio station. I have no idea how detailed that information is. Does it list every transaction, by every device, by time of day? Does it report transactions, or tagging events, or both? Or do they just get a $ total each month and a check for the affiliate fees?
Excluding the broadcaster from the process, and obfuscating the outcome, diminishes the value for radio. It turns us into an customer acquisition vehicle, without getting rich information on listener behaviour.
There’s also the small problem of ne’er do wells “stealing” the meta-data. Let’s assume that someone nefarious decides to strip that meta-data, and amend the affiliate ID to be their own. You might use an apparently legitimate streaming portal, or attractive device, and that money would go to the middle-man, not the radio station. The value of meta-data is increasing, and we should be more careful about whom we exchange it with. In my opinion, broadcasting meta-data risks destroying value. I do agree that meta-data should be open, but I generally think that you should know who you’re providing it to. (I’m going to blog about the side-effects of this shortly).
As you’d expect, I think the RadioTAG model is fairer. It keeps our meta-data relatively secure, whilst still allowing legitimate users (like listeners and Apple) to have access to all the information they need. It scales well, because it’s not transmitting vendor specific information over the air. The broadcaster can see who is requesting what meta-data when, and use that to track listener behaviour in real-time. And very importantly, it lets people tag *anything* interesting they hear on the radio, not just the songs.
I’m excited that Apple are into radio. I’m excited that the Nano is such a great little device. I’m excited for the prospects of Tagging on the Nano. I just want to make sure we make it great for listeners, as well as for radio stations and for Apple.