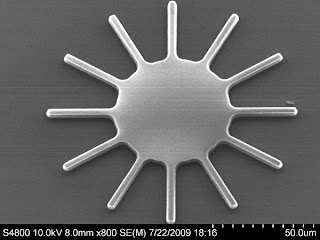 ScienceDaily (Aug. 31, 2009) — Researchers are developing a new class of tiny mechanical devices containing vibrating, hair-thin structures that could be used to filter electronic signals in cell phones and for other more exotic applications.
Because the devices, called resonators, vibrate in specific patterns, they are able to cancel out signals having certain frequencies and allow others to pass. The result is a new type of "band-pass" filter, a component commonly used in electronics to permit some signals to pass through a cell phone's circuitry while blocking others, said Jeffrey Rhoads, an assistant professor of mechanical engineering at Purdue University.
Such filters are critical for cell phones and other portable electronics because they allow devices to process signals with minimal interference and maximum transmission efficiency. The new technology represents a potential way to further miniaturize band-pass filters while improving their performance and reducing power use, Rhoads said.
The device is an example of a microelectromechanical system, or a MEMS, which contain tiny moving parts. Incoming signals generate voltage that produces an electrostatic force, causing the MEMS filters to vibrate.
Researchers have proposed linking tiny beams in straight chains, but Rhoads has pursued a different approach, arranging the structures in rings and other shapes, or "non-traditional coupling arrangements." One prototype, which resembles spokes attached to a wheel's hub, is about 160 microns in diameter, or comparable in size to a grain of sand.
Findings are detailed in a research paper to be presented on Sept. 2 during a meeting of the American Society of Mechanical Engineers' Third International Conference on Micro and Nano Systems. The conference runs from Aug. 30 to Sept. 2 in San Diego. The paper was written by Rhoads and mechanical engineering graduate student Venkata Bharadwaj Chivukula.
In addition to their use as future cell phone filters, such resonators also could be used for advanced chemical and biological sensors in medical and homeland-defense applications and possibly for a new type of "mechanical memory element" that harnesses vibration patterns to store information.
"The potential computer-memory application is the most long term and challenging," Rhoads said. "We are talking about the possibility of creating complex behaviors out of relatively simple substructures, similar to how in cellular biology you can have a relatively complex behavior by combining hundreds or thousands of simple cells."
The band-pass filter design promises higher performance than previous MEMS technology because it more sharply defines which frequencies can pass and which are rejected. The new design also might be more robust than the traditional linear arrangement, meaning devices could contain manufacturing flaws and still perform well.
The devices are made of silicon and are manufactured using a "silicon-on-insulator" procedure commonly used in the electronics industry to make computer chips and electronic circuits. The small, vibrating mechanical structures contain beams about 10 microns in diameter, which is roughly one-tenth the width of a human hair. The beams can be connected mechanically, like tiny springs, or they can be linked using electric fields and magnetic attractions.
"We are in the process of making a second prototype," said Rhoads, who has used simulations and also conducted experiments with the devices to demonstrate that the concept works.
The devices are being fabricated at the Birck Nanotechnology Center in Purdue's Discovery Park through a collaboration with Dimitrios Peroulis, an assistant professor of electrical and computer engineering.
The research is based at a new Dynamic Analysis of Micro/Nanosystems Laboratory at Birck. The lab, managed by Rhoads and mechanical engineering professor Arvind Raman, is equipped with an instrument called a scanning laser Doppler vibrometer, which uses a laser to measure the minute movement of the tiniest structures. The system is housed inside a vacuum chamber sitting on top of a special vibration-absorbing platform critical to making the precise measurements.
Other faculty members and graduate students also use the specialized facility.
The research is funded by the National Science Foundation through an NSF Faculty Early Career Development grant, awarded to outstanding young researchers. So far four Purdue researchers have received the grants this year. The research includes educational components using Purdue's nanoHUB - the Web portal of the Network for Computational Nanotechnology, also NSF-funded and based at Purdue - as well as Purdue's Summer Undergraduate Research Fellowship program.
Rhoads will develop and deploy on the nanoHUB a software tool to simulate the behavior of the resonators, a new K-12 education curriculum on emerging microelectromechanical and nanoelectromechanical systems, and college-level course materials and lectures associated with a new course on the systems.