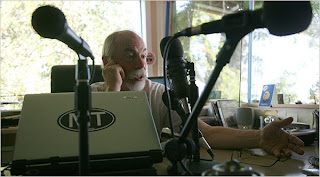 September 8, 2009
From a Porch in Montana, Low-Power Radio’s Voice Rises
By KIRK JOHNSON

CRESTON, Mont. — The floor of the broadcast booth at KXZI radio, which is, truth be told, really just Scott Johnston’s front porch, slopes gently down toward the yard, as 90-year-old farmhouse porches tend to do.
Mr. Johnston’s antenna, out by the big cottonwood trees that line the road, is not as fortified as it might be either. Unsupported by wires, it sways in the wind, so that when a storm front strikes northwest Montana, the station’s signal fluctuates. And even in the best of times, 100 watts go only so far — the music cannot be heard even in nearby homes because the signal does not penetrate walls very well.
Mainstream media it is not.
“I think some of my neighbors don’t even know I exist,” said Mr. Johnston, a bearded 58-year-old who looks more like the folk musician he once was than anybody’s idea of a media mogul.
But low-power noncommercial radio stations like Mr. Johnston’s, which emerged about 10 years ago in a brief window of eased federal regulation intended to foster competition with the big corporate radio chains, might be soon about to roar, some communications experts say — or at least squeak loudly enough to be heard.
A bill now before Congress, and considered by some low-power radio advocates to have a good chance of passage this year, would potentially double the number of licensed, low-power stations from about 800 now to perhaps 1,600 or more.
At the same time, technology is shifting the boundaries and definitions of what it means to be local, and even what it means to be radio. Internet streaming and digital wireless reception are combining in ways that could allow almost any station, even one broadcast from a front porch, to be heard anywhere in the world from the next generation of hand-held devices and smartphones.
A kind of “aha” moment on that front arrived for Mr. Johnston earlier this year when a surgeon in Jacksonville, Fla., who listens to KXZI in his operating room via the Internet, signed up to become a financial sponsor. Mr. Johnston has been streaming live since 2004, shortly after his station went on the air.
“My nurses know to have it going when I come in,” said Dr. Steve Felger, who said he likes the station’s quirky musical mix — bluegrass, jazz, folk and blues — and the feel of rural Montana that he has come to love through his vacations there.
And the low-power noncommercial stations that have emerged in the last decade are nothing if not local. One station in St. Paul broadcasts to the Hmong community. A station in Woodburn, Ore., focuses on the interests of farm workers.
Many stations have a religious bent. Mr. Johnston’s station is in fact licensed to his church — federal licensing required a nonprofit organization to sign on — but the congregation’s leaders do not insist on any religious programming and have given him carte blanche to play the music he loves, he said.
“These little low-power stations are really, really local in an age when not much else is,” said Michele Hilmes, a professor of media and cultural studies at the University of Wisconsin at Madison who has written widely about radio history.
Mr. Johnston calls his own, personally devised format “The Montana Radio Cafe — Front Porch Radio Served Fresh Daily.”
Twenty-four hours a day, sometimes on programmed auto-pilot, sometimes with Mr. Johnston behind a microphone, he has woven his own musical tastes, backed by a 21,000-song catalog, into a mixture of the utterly obscure and the only mildly so. He plays compositions by a street musician from Seattle, a Latina jazz singer fluent in four languages and a band from Montana that plays a cockeyed mix of bluegrass and rap.
Sponsors that pay the bills and the salaries for the station’s three employees — Mr. Johnston, his wife, Marie, and a bookkeeper — are mostly local too: a ski resort, a chiropractor, a horseshoeing business operated by Mr. Johnston’s son.
“I wanted to create a music-driven station where music gets heard that would never be played on a commercial radio station,” he said.
His own picaresque story in ending up here sounds like a lyric from an alt-country song on his playlist. A son of military traditions, he grew up in Colorado, enlisted in the Army, served in Vietnam from 1969 to 1970, then tried his hand at the early 1970s folk music scene on the East Coast.
Eventually wandering back West, on his way to Oregon, he paused in Montana and fell in love, first with the landscape and then with Mrs. Johnston, with whom he has six children and who is invariably referred to on the air as “Marie the Beautiful.” Through a person he met in church, he got a job in a commercial radio station as a D.J., where he learned the mechanics of radio but also its frustrations — the strict limits on what music could be played
His dreams for KXZI, and for low-power radio in general, are a mix of the modest and the grand. Small stations like his, he said, if royalty payments for Web-streaming remain affordable, could have equal footing to compete with the biggest stations in the world, and perhaps force them to become better.
But a tiny station signal, even with a bootstrap boost from the Internet, is still a candle in the wind. He said he still vividly remembers the night in March 2004 when the station went live for the first time and how he and a friend got in a car and drove, just to see how far they could go and still hear the music. They were perhaps among the only people in the world at that moment who knew of the station and were tuned in, and they sat in a parking lot at 11 p.m. in the town of Whitefish reveling in the magic of that, he said.
The signal had traveled almost 20 miles.