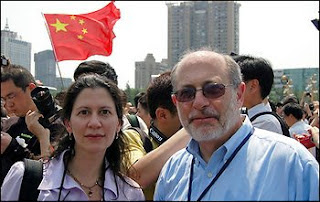 Since a devastating earthquake hit central China, National Public Radio's Melissa Block and Robert Siegel have provided American audiences with firsthand accounts of the destruction and human suffering not just on NPR's "All Things Considered" -- the program they co-host in Washington -- but also on ABC, NBC, CNN, PBS and Canadian television networks.
By a twist of fate, Block, Siegel and seven NPR staffers were on the scene last week when the quake struck. The NPR crew was in the Sichuan provincial capital of Chengdu, about 50 miles southeast of the quake's epicenter, to prepare a series of stories for this week's program on China's culture and emergence as an economic superpower.
Instead, NPR's reporters wound up offering the Western world some of the first words, sounds and pictures from a catastrophe that has killed more than 41,000 and left millions homeless.
Block was recording an interview with a clergyman in a church meeting room in Chengdu when she felt the building begin to shake. As she ran into the street, she kept her tape recorder going, narrating as she fled. ("The ground is undulating under our feet. . . . Bricks are falling from the building.") The audio of the moment was carried on NPR within two hours, making it among the first recordings of the disaster heard beyond China. It was later played on other news outlets, such as on ABC's "Nightline."
Block, 46, also filed an 11-minute report a few days later about a young couple's frantic search for their 2-year-old son and his grandparents in a collapsed apartment building in the city of Dujianyan. Her own voice nearly breaking, Block described the emotional scene and recorded the mother's heartbreaking cry to her entombed child: "Mama is here!" The piece ran on NPR and later was played several times on CNN and CNN International, illustrated with NPR producer Andrea Hsu's still pictures.
The story had added poignancy for Block, who has a 5-year-old daughter. In a phone interview from China on Tuesday, she said of her reporting: "I think I probably have emotional blinders on and am not thinking about it. You just wrench through it in the moment, and the next day you just soldier on. You put on an emotional straitjacket or your brain can't function."
Siegel, 60, was in his hotel room on the 27th floor in Chengdu when he felt the building start to sway. "I thought a large gust of wind had hit the hotel," he said Tuesday. He bolted from the room, running into a panicked hotel employee in the hallway; both scampered down a stairway to safety.
Siegel later reported on the desolation of a hard-hit mountain village and the chaos at an overburdened hospital emergency room. He recounted some of his experiences in interviews on PBS and NBC.
NPR's radio-to-TV crossover is a kind of throwback to an era when radio carried the first audio accounts of major events, before television crews could move bulky equipment to the scene. Such reporting coups have become rarer in an age of diminished radio reporting and with the ascendancy of television and the Internet.
But Siegel, who began as a radio reporter 40 years ago, says radio can often provide a more vivid impression of events than TV. "I think it's a medium that, every decade, is declared dead and somehow it manages to survive," he said. "When you have TV, you always have to have pictures, and that gets in the way of language. . . . There's something very natural about talking to people and hearing the human voice. It's a very elemental form of communication."
Sound, Siegel says, even trumps language. He mentions visiting a village and asking a knot of people how many had lost their homes. "You didn't need a translator to understand their response," he says. "You could hear it in the voices."
Block and Siegel say residents and local officials were often suspicious of them, and occasionally hostile; at one rescue scene, Block and Hsu had to be escorted away from a mob angered by the presence of American reporters. Both said the reaction probably was a response to Western coverage, particularly on CNN, of China's crackdown on dissidents in Tibet and the troubled Olympic torch relay. Said Siegel, "It's been said that everyone in China can quote Jack Cafferty," a CNN commentator who last month caused a furor in China by calling the country's leaders "goons and thugs." CNN has apologized for the comment.
Months ago, NPR picked Chengdu, a city of 4.5 million, as the locus of its special reports. The idea, Block says, was to explore a region of China unfamiliar to most Americans and to "get beyond" the usual news stories about China in the months leading up to the Beijing Olympics.
The quake forced the NPR broadcasters to scrap or hold stories that had been planned for this week, such as Block's feature about learning to cook kung pao chicken and a profile of a stockbroker who started an organic farm outside Chengdu. But other stories were simply retrofitted to events; a piece by correspondent Louisa Lim about the economic impact of a new dam in the region became instead a story about fears of the dam's collapse.
In unexpected ways, Siegel thinks NPR accomplished what it set out to do. "Oddly, without anticipating a crisis, [the disaster] did what we were trying to do here -- to put a human face on another place and its issues," he said.

does television have a certain power that radio does not? "Yes," he acknowledged wryly, "The picture is very powerful. You know, even cats and dogs stop and watch it."