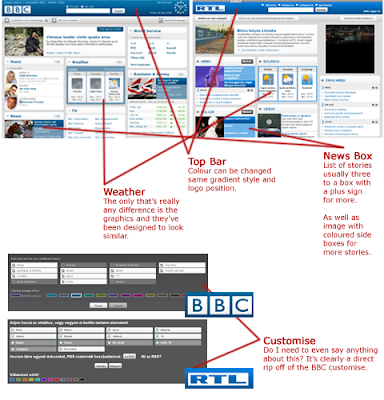 Imitation, flattery and the BBC

I have an a blog post in draft I’ve been putting off four about a month now that asks the question “what’s wrong with the new BBC Homepage?” The premis being that I like so why doesn’t everyone else.
Well - now it seems that at least two television companies DO like - in fact they like it enough to have taken the design wholesale and recreated on their own sites.
The state broadcaster for Hungary (www.rtl.hu) and the Croation broadcaster (www.hrt.hr) have a new look on their homepages and it’s pretty familiar.
If you wait long enough you’ll see the HRT site merge into the RTL site and then into the BBC site.
Both the RTL and HRT versions are clear rip-offs of the BBC Homepage - they both use the same gradiented top bar, both have the logo in the same position, customise options in the same position and the same style movable boxes and almost identical footers.
Now RTL is the worst offender of the two as it’s almost a direct rip off of the international facing BBC site - at least HRT have tried to make a few changes even if the essense is identical.
Some of the copied elements can be excused as web standard design ideas - banner at the top, logo in the corner etc… But they both look and work so similar to the BBC Homepage it’s a bit of a leap to excuse.
You can look at a more detailed comparison on Vijesti.net but it’s not in English and so I have no idea what it’s saying - but it all seems to come to the same conclusion - this is a clear rip-off of bbc.co.uk.