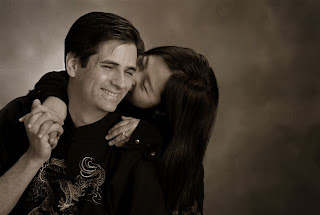 If you're twirling the dial on your radio May 17 and happen to hear wedding bells, you may want to stop for a moment and listen to a little history being made. In a world where wedding websites have become commonplace, Moncton native Serge Cormier decided to take things one step further and turn his wedding into a four-day radio broadcast. "I'm just somebody that likes to stand a little bit above the crowd," says Cormier. "I thought it would provide a lifelong memory of our wedding. We'll make a recording of the entire broadcast and we'll be able to listen to it time after time. And we will be able to share our wedding with the general population as well, which I thought is a neat idea, to let the world know how much we love each other." Fiancée Yanbing Zou, who Cormier met when both were students at the University of New Brunswick, only needed a little bit of convincing. "She understands my passion for radio," explains Cormier.
Cormier studied radio broadcasting at NBCC Woodstock, then worked in the field for a while. Though he now owns a consulting firm in Toronto, radio is still his first love. Cormier got the idea for the wedding broadcast online. "I found this company in Europe that offers wedding radio FM service. They come on site where your wedding is taking place and put a temporary radio station on the air and it is themed with the wedding in mind," he says. "That gave me an idea. I did some other research and saw that in Canada it hadn't been done yet, so I decided this might be a good idea that might grow into a business venture eventually. I also wanted to be the first one in Canada to have their wedding broadcast live on the air." Luckily Cormier stayed in contact with a lot of the friends he made during his studies at NBCC Woodstock, and they have agreed to pitch in and help with the venture so the groom can focus on being a groom. The broadcast is actually going to be run out of a hotel room at the Holiday Inn Express on Mountain Road, where the wedding and reception are taking place. The hotel graciously allowed Cormier to install an antenna on its roof to help make the broadcast happen.
WedFM will begin broadcasting on 100.9 FM at 2 p.m. May 14 and continue until about noon on the day after the wedding, May 18 "Basically when we have to check out of the hotel room," Cormier says.Cormier says the station will be broadcasting 24 hours a day, though, like most commercial stations, the overnight hours will be covered off by pre-programmed music.Some of the other programming in the works includes a pre-recorded Top 40 countdown hosted by Cormier and Zou and Chinese language lessons to share a bit of Zou's heritage.
Zou grew up in China and moved to Canada five years ago to study at UNB "There will also be live coverage and interviews during the wedding ceremony," Cormier says. "Myself and my fiancée and other people in the wedding party will be interviewed during the day on Saturday and there will be a live-to-air broadcast of the wedding party on Saturday night."With only 50 watts of power, the actual broadcast will only be heard in Moncton, Riverview, and Dieppe, and Cormier expects even then coverage will be kind of spotty, so he is also hoping to webcast the radio broadcast on the couple's wedding website, www.wedfm.ca.
Cormier says he's always wanted to own his own radio station and WedFM may be the first step toward that. He says he's waiting to see what kind of feedback he gets, but if the idea proves popular, he may spin it into a business, providing the service for other interested couples "I already have a lot of people that think it is an original idea and think it is good," he says. "By actually doing it, it will give me a very good idea of whether this can actually go ahead as a business venture."