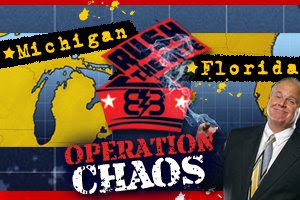 When liberal talk radio host Randi Rhodes returned to the airwaves last month after her well-publicized departure from the Air America Network, she knew her loyal listeners would be relieved. But even she didn't anticipate the fevered response, evidenced by sacks of mail and hundreds of calls.
Not to mention a suitcase worth of Mary Kay cosmetics hand-delivered by a fan to the West Palm Beach studios of WJNO-AM 1290, where Rhodes' afternoon drive-time program now originates under a new syndication deal.
"There was, like, a room full of stuff!" said Rhodes, whose weekly audience of 1.5 million-plus listeners positions her among the top echelon of talk hosts on radio.
Such is the state of talk radio today. A format that barely existed until the late 1980s is now, literally, the talk of the nation, second only to country music in the number of stations that carry it.
Its total audience: a passionate (and, important to advertisers, relatively affluent) 48 million listeners, according to the Arbitron ratings service. Some industry sources put the figure at 100 million-plus when factoring in satellite and public radio.
For example, Rhodes, who calls Lake Worth home and worked for WJNO locally for 10 years before she signed with Air America in 2004, just brought her newly syndicated show to satellite broadcaster XM Radio this week.
But with talk radio, it's not just about numbers. It's also about influence, especially in an election year, and playing to that politically rabid pool of listeners, who have a love-hate relationship with the reigning hosts. For all those who refer to Rhodes as "the Goddess" - her moniker among fans - there are just as many who view her as an "extremist nut job," as one listener complained. The bottom line? "Talk radio is where the voters are," said Michael Harrison, publisher of Talkers magazine, an industry trade journal.
Consider that other nationally syndicated talk host who lives in our back yard: conservative pundit and Palm Beach resident Rush Limbaugh (heard midday locally on WJNO). He not only commands a weekly audience of 14 million-plus, largest in the industry, but he also is widely credited with helping to bring the conservative cause to the fore in the post-Ronald Reagan era.
Limbaugh's latest effort: "Operation Chaos," a plan to encourage Republicans to vote for Hillary Clinton in states and territories where they are eligible to participate in Democratic primaries. The goal is to keep the Democrats divided for as long as possible, thereby boosting Republicans' chances in the fall. If Limbaugh represents the old guard of talk radio, there's a sizable new guard, and many of them are branching out beyond radio.
Take Glenn Beck, a conservative who's heard weekday mornings on WJNO. He hosts a show on CNN's Headline News. He has written two books, including the recent best-seller An Inconvenient Book. But even Beck will tell you that it all begins and ends with his three hours daily on the AM dial. "Radio is the fullest expression of who I am," he says.
That's no small statement, given that radio dates back more than a century but has struggled recently. (Last year, radio revenue was down 2.3 percent, industry analyst BIA Financial said.)
But talk radio has remained strong. In many ways, the format can credit its existence to the 1987 repeal of the FCC "fairness doctrine," which meant opinions could now run wild without a need for a response. In an instant, the big-mouth era was born.
Beck, who started as a music DJ, says the most successful talkers understand that the format is driven by the need to entertain, not necessarily to inform. "It's got to be bigger than politics," he says.
Rhodes agrees that talk radio is more about provocation than promoting a cause. "People listen to me even if they disagree with me. ... It has to do with the question of can you evoke emotion?" says the controversial host, who came under fire from New York-based Air America for referring to Hillary Clinton as a "(expletive) whore." (Rhodes resigned after being suspended, but she insists her problems with the network were related more to contract discussions.)
That emotional connection creates a sense of family among listeners, says Eric Rhoads, publisher of Radio Ink, a national trade journal based in West Palm Beach.
"It's that one person behind that microphone talking to you," he says.
Soon there will be more people talking, Rhodes predicts. There's room on the airwaves - talk has become a stronger presence on FM in recent years - for the format to grow.
Says the brash host: "It's just really starting."

Rush a Randi a confronto

Hometown: Cape Girardeau, Mo.
Where he lives now: Palm Beach
Weekly audience (as of fall 2007): 14 million-plus
Moment of fame: Helped propel the Newt Gingrich-led 1994 'Republican Revolution,' resulting in his being named an honorary member of the U.S. Congress.
Moment of shame: Was arrested in 2006 in Palm Beach County on charges of doctor shopping stemming from his addiction to prescription drugs.
Quote: 'Feminism was established to allow unattractive women easier access to the mainstream.'

Hometown: Brooklyn, N.Y.
Where she lives now: Lake Worth
Weekly audience (as of fall 2007): 1.5 million-plus
Moment of fame: Hired to help launch the Air America liberal talk network in 2004; gained national headlines on her first day for slamming Ralph Nader in an on-air interview.
Moment of shame: Suspended from Air America this year after she referred to Sen. Hillary Clinton as a 'whore.' Rhodes quit the network and found another radio syndicate.
Quote: 'If our president was never the recipient of cronyism and nepotism, he'd be an assistant manager at the Kennebunkport Denny's right now.'

Talk radio has 48 million weekly listeners, which represents 10.7 percent of the national radio audience. They are:

Mature (35 percent are 65-plus)
Comfortable (41 percent have household incomes of $75,000-plus)
Politically active (73 percent voted in 2006)
(Sources: BrainyQuote.com, Talkers magazine)

How does Randi Rhodes (liberal) fare?

* Weekly audience: 75,000 to 100,000 listeners.
Airs some of the most prominent talkers in the country, including Glenn Beck (9 a.m. to noon weekdays), Rush Limbaugh (noon to 3 p.m.weekdays), Randi Rhodes (3 to 6 p.m. weekdays), Sean Hannity (6 to 9 p.m. weekdays) and Mark Levin (9 to 11 p.m. weekdays).
Ratings showed an increase in the latest ratings period, from a 2.6 percent share to a 3.0 percent share of the total local audience. Station officials attribute the growth to interest in the 2008 election.
* First went on air in 1936, making it Palm Beach County's oldest station.

Why has talk radio taken off over the past two decades?

Here's what Michael Harrison, publisher of Talkers magazine, the industry bible, cites as the key factors:
•Personalities: Provocative voices keep the format alive. 'It's got great personalities, which music radio doesn't have,' Harrison says.
•New broadcasting rules: When the FCC 'fairness doctrine' was repealed in 1987, it allowed radio stations to air political opinion without much in the way of restriction. Enter Rush Limbaugh.
•Politics as the new rock 'n' roll: We follow politics the way we used to follow music, Harrison says. It used to be all about the DJ (think Cousin Brucie). Now it's all about the political talker (think Rush).
Creato da Andrea Lawendel alle 10:06