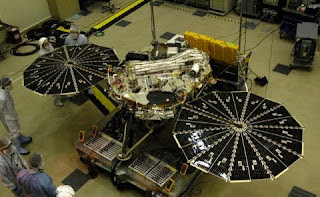 WASHINGTON (AFP) — A communications glitch between the Phoenix Mars probe and Earth has delayed operations, two days after the spacecraft landed on the Red Planet in search of conditions to support life, NASA said Tuesday.
A "transient event" knocked out UHF radio transmissions between Phoenix and the Mars Reconnaissance Orbiter (MRO), which relays data and instructions between the Phoenix and Earth, said Fuk Li, the Mars Exploration Program manager at NASA's Jet Propulsion Laboratory in Pasadena, California.
The problem forced the mission to delay starting the deployment of the spacecraft's 2.35-meter (7.7-foot) backhoe-like arm, to be used to dig into the icy soil of the Martian arctic to collect samples.
Li said a possible cause of the MRO radio failure -- which he said had never occurred before -- was high-speed cosmic ray particles colliding with it.
National Aeronautics and Space Administration scientists were actively working to repair the glitch, he said.
The problem was not with the Phoenix, Li emphasized. "We know for sure it is with MRO.... Phoenix is healthy," he added.
While the incident had delayed sending instructions to the Phoenix that would tell its equipment what to do, its three-month mission to probe the Mars arctic permafrost for habitable conditions was not in jeopardy, Li said, because another orbiter, the Odyssey, can serve as a communications backup.
NASA officials said meanwhile another small problem, of equipment potentially obstructing the robotic arm's deployment, had been cleared. "Phoenix has performed extremely well, beyond our expectations. Currently it is in great shape," Gary Napier, spokesman for Lockheed Martin Space Systems, which built the lander, told AFP earlier Tuesday. "We hope to start digging into the Martian soil sometime in about a week" after the arm is set up and programmed for the operation.
The mission's main aim is to see whether the frigid polar region has had or has had in recent history the conditions to support microbial life -- the presence of water in its liquid form, and key elements like carbon, nitrogen, phosphorus and hydrogen.
Researchers believe that under the dust coating of the Martian arctic, there lies an icy layer that hardens and softens with the planet's seasons that could give evidence of those conditions.
Photographs from Phoenix showed polygonal shapes on the surface that NASA scientists believe are evidence of the subsurface ice repeatedly thawing and refreezing. "All of this is prime digging area," Peter Smith, Phoenix principal investigator at the University of Arizona, told reporters Tuesday. "This is a place we are going to get to know very well over the next three months."
Once deployed, Phoenix's robotic arm has the ability to dig up to half a meter (20 inches) below the surface, the farthest point at which scientists think it will have to go to reach a permafrost-like layer and water ice. "We expect the ice to be somewhere in that five to 12 inches (13-30 centimeters) range below the surface," Napier said.
The arm will deliver samples of the soil and ice to equipment on board the Phoenix platform for detailed chemical and geological analysis.
The equipment includes the microscopy, electrochemistry, and conductivity analyzer (MECA) which combines a wet chemistry laboratory, a probe for thermal and electrical conductivity, and optical and atomic force microscopes.
The other key instrument is the thermal and evolved gas analyzer (TEGA), which combines a high-temperature furnace and a mass spectrometer instrument to assess the soil samples.
A second key goal of the Phoenix mission is to study the present and past climate of the polar region, never before visited by a probe from Earth, to better understand how wind, temperatures and water in all its forms have shaped the planet's geology.