Over two hundred community radio stations are now broadcasting in locations across the UK, Ofcom announced today, after new services went live in Kent and Dorset. 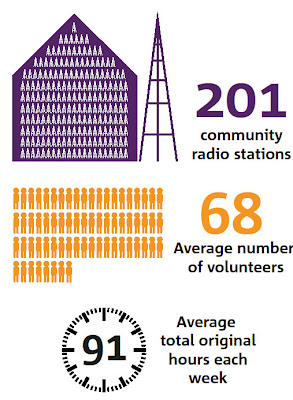 The milestone comes as the first community radio station to hit the airwaves – The Eye in Melton Mowbray – nears its seven-year anniversary.
Since Ofcom awarded the first community radio licence in 2004, new stations have launched in areas all over the UK – from inner London to Orkney – each serving a particular community’s needs.
Community radio stations typically cover small areas, generally up to 5km, and are run on a not-for-profit basis. They reflect a diverse mix of cultures and interests – some catering for whole communities, while others focus on particular areas of interest.
Ed Richards, Ofcom’s Chief Executive, said: “Community radio is thriving and helping to bring together local communities across the UK.
“With more than 200 stations on air, community radio is enabling thousands of people to have a voice and help serve the needs of their local area.”
Community radio stations reflect the variety of cultures, demographics and tastes in the UK:
Kane FM. Based in Guildford, Surrey, Kane FM serves young people aged 15-39 focusing on and supporting independent urban music and showcasing local artists. The station works to support services and agencies dedicated to reducing inequality and social exclusion.
Garrison FM. Six community stations serving British Army garrisons in Great Britain, including Aldershot, Catterick and Edinburgh. The Garrison FM stations provide welfare and communication services to soldiers and civilians living and working within the army community.
The Eye. The first community radio station to start broadcasting, 103 The Eye has been serving residents of Melton Mowbray since November 2005.
Christine Slomkowska, Managing Director of 103 The Eye, said: “Being a community radio station means 103 The Eye can keep the localness in radio and provide an information and entertainment service for our area which was under-served by other stations.
“Over the last seven years we’ve given a wide range of people the opportunity to produce and present radio programmes, offering training and airtime opportunities which have led to careers in the media and progression within the music industry.”
Latest stations on air
Since the first station went live seven years ago, a new community radio station has launched, on average, every 13 days.
SFM and Garrison FM Blandford are the latest stations to begin broadcasting. SFM provides the residents of Sittingbourne, Kent, with a local music and speech service.
Garrison FM Blandford in Dorset is the latest community radio station to serve a British Army garrison in Great Britain.
Mark Page, Managing Director Garrison Radio, said: “Blandford is a very close community of soldiers and families and through Garrison FM we can bring Army news and information specific to them. Going around Blandford Garrison, hearing the station on in offices and finding people to talk to about it is amazing.”
Community benefits
As well as providing unique content, community radio stations bring wider benefits to local people. These include offering training and work experience opportunities and providing a voice to those, such as older people or speakers of minority languages, who may find it harder to access the media.
Kane FM, based in Guildford, was a pirate radio station but applied for a community radio station when new licences became available in the area. It wanted to become a community station so the people involved could start working with disadvantaged groups. Kane FM has an advisory panel consisting of local organisations such as the Police, Surrey County Council, Surrey Arts and Youth Justice.
Simon Foster, Director of Kane FM, said: “Since becoming a community radio station, Kane FM now has 100 independent local musicians and artists creating content and weekly shows, as well as over 130 volunteers.
“We want to turn around those people at the fringes of society and give them new skills and a sense of belonging; to strive forward and achieve for those who may otherwise be dismissed or ignored.”
Volunteers
All community radio stations involve volunteers working in various jobs, including presenters and producers.
The average station has over 68 volunteers each year, who in total give more than 1,000 hours of their time a month to these community services. The average station broadcasts 91 hours of original content every week, 84 of which are live. Ofcom estimates that volunteers contribute more than 2 million hours per year to community radio.
All stations offer some form of training to their volunteers. Phoenix Radio in Halifax, for example, developed a specific radio-based training scheme for young people aged 16-25, while Desi Radio in Southall, West London, has a dedicated centre providing training for radio presenting.
In total, almost half of all stations (47%) are aimed at a general audience in towns or rural communities, with 15% broadcasting to general audiences in urban areas. However, a significant proportion target specific groups such as young people (10%), minority ethnic groups (13%) or military personnel (4%).
The Community Radio Order 2004 paved the way for Ofcom to license these new types of radio stations. Ofcom has since awarded licences to 259 community radio services.
Soo Williams, Community Radio Manager at Ofcom, said: “We are now into the third round of community radio licensing and there continues to be strong demand to set up new stations from all corners of the country.”