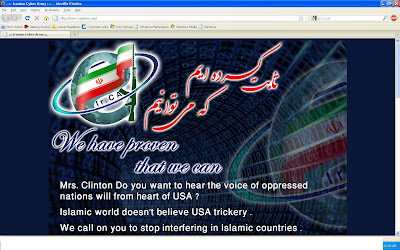 Iranian Cyber Army Claims Credit for Cyber Attack on VOA and Interference of U.S. International Broadcasting Increases
Note: This press release is updated to include reports of the Iranian Cyber Army taking responsibility for the hacking and news of an attack on the RFE telephone system.
The Iranian Cyber Army has taken credit for a cyber attack on the Voice of America, according to reports by Iranian state media outlets Press TV and Fars News Service. VOA suffered a web Domain Name System (DNS) attack, while VOA’s Persian News Network (PNN) and RFE Radio Farda programs have faced increased satellite signal interference, and RFE faced a “denial of service attack” on its telephone systems in an effort to keep Iranians from contacting Radio Farda.
As popular protests unfold across the Middle East and audiences for U.S. international broadcasting surge, efforts to interfere with the networks have increased.
“Our broadcasters are at the forefront of reporting the most tumultuous events we have seen unfold since 1989,” said Walter Isaacson, chair of the Broadcasting Board of Governors (BBG) which oversees all U.S. international broadcasting including the Alhurra TV, VOA and RFE. “It is a testament to their vital role that they are subject to the work of hackers and signal interference.”
On Monday, February 21, an unknown party hacked the Voice of America’s primary domain name (VOANews.com), and other related domains, redirecting visitors to a website claiming to be run by a group called the “Iranian Cyber Army.” Yesterday, Iran’s Press TV reported a statement by Ali Saeedi Shahroodi, an official with Iran’s Islamic Revolutionary Guard Corps (IRGC) claiming, “The hacking of a VOA homepage by the Iranian Cyber Army … shows the power and capability of the Corps (IRGC) in the cyber arena.” Iran’s semi-official Fars News Agency also credited the Iranian Cyber Army, in a February 22 report, explaining that the attack was in response to VOA’s reporting on events in Iran.
The attack did not affect internal systems or servers, nor was any data lost or compromised. The BBG is working with appropriate authorities to investigate further.
“There's a saying that a hit dog hollers - that can be applied to whoever tried to cut off access to VOA News by attacking the domain provider on Monday. The fact that the sites were redirected to the Iranian Cyber Army certainly raises an eyebrow or two,” said Dana Perino, a member of the BBG. “Technology is chipping away at the stranglehold on free and fair information inside Iran. VOA and RFE are strongly committed to providing the news at it happens in a variety of ways so that every Iranian that can get access to the free media can benefit from our journalists' reporting.”
Last week RFE’s Radio Farda faced a variation of a “denial of service” attack on its phone lines with a flood of automated calls aiming to clog its answering machines. Calls played just over one minute of a looped recording of speeches and sermons in Persian before hanging up.
Since February 13, there has been intermittent but frequent interference of VOA PNN and Radio Farda satellite signals with programming in Persian for audiences in Iran.
As of the morning of February 21, there has been a continuous service interruption on one satellite channel carrying VOA’s PNN. PNN is carried on three other satellite paths as well as online, including its popular TV satire, “Parazit.” Millions of the show’s fans use proxy servers to access the program through social media sites like Facebook and YouTube. Similarly, Radio Farda's website has seen an approximate 50 percent increase in web traffic over the past two weeks.
The Broadcasting Board of Governors is an independent federal agency, supervising all U.S. government-supported, civilian international broadcasting, whose mission is to promote freedom and democracy and to enhance understanding through multimedia communication of accurate, objective, and balanced news, information, and other programming about America and the world to audiences overseas. BBG broadcasts reach an audience of 165 million in 100 countries. BBG broadcasting organizations include the Voice of America, Radio Free Europe/Radio Liberty, the Middle East Broadcasting Networks (Alhurra TV and Radio Sawa), Radio Free Asia, and the Office of Cuba Broadcasting (Radio and TV Marti).

[...]
This is where Anonymous and its "Operation: Iran" come in.
The collective is providing users with special advice forums and tools to fight the Iranian government's censorship. The group has also encouraged Iranian users to use distributed-denial-of-service attacks (DDOS) in order to take down key government websites like khamenei.ir, the website of Supreme Leader Ayatollah Khamenei, as well as leader.ir and president.ir.
Arash is a hacker who works with Anonymous to fight government censorship and cybercontrol in his native Iran. It's hard to pin down what exactly Anonymous is. The organization has no leaders and no headquarters and grew out of image-sharing forums in the United States.
Arash describes the group as a "fluid movement." In a video, the group explains itself:

Arash describes the group as a "fluid movement."
While Arash and hackers like him have been targeting Iranian government websites and state media, the authorities are fighting back with high-tech monitoring and filtering equipment. Just weeks ago, the government announced the launch of a new cyberpolice unit.
Arash explained "Operation: Iran" to Radio Farda's Hannah Kaviani by way of the organization's media chat room in an interview on February 16. The group then recorded Arash's responses using their signature narration style for the following Q&A:
Radio Farda: What inspired Anonymous to start Operation Iran?
Arash: Recently, Anonymous has been assisting people in various countries where freedom of speech and freedom of information is restricted. In Iran, for instance, they have very few freedoms and very strong Internet censorship. This is why we initially became involved with Iran's protests. One of the main goals of Anonymous is to defend freedom of speech, and this is one of the biggest problems inside Iran.
Iran's government not only censors media inside Iran but also in other parts of the world. For example, in the last few days, even people in Europe have had problems watching BBC Persia and other Persian channels. This is because of the Iranian government jamming the satellites.
Radio Farda: Can you describe Operation Iran's strategy?
Arash: Anonymous's only rule strictly bans attacking the media. I personally do not believe that IRIB [Iran's state television and radio] count as media, however. They are state brainwashing systems, at best. The operation's official focus was on three government websites and the government's mail servers, which were all down yesterday.
Radio Farda: What other ways does Anonymous help Iran's online protest movement?
Arash: The Tor project is a project designed to give people a safe way to use the Internet anonymously and securely. But Iran is the first country to block that software. We know how powerful Iran's Islamic regime is, and we know it's hard fighting against them. But we have hope. And we are lucky because we are fighting on the side of the people of Iran. There are other anonymity tools, which the government has not yet blocked.
Arash says one such tool is the anonymizing network I2P.
In 2009, Anonymous -- a group Arash says is funded entirely from donations -- helped launch the opposition support website Anonymous Iran. The site was launched as a platform for exchanging information between Iran and the world and now claims over 15,000 users.
But Anonymous has a controversial past. The group was accused of being behind a spate of 2008 attacks on an epilepsy support forum, which triggered migraine headaches and seizures in photosensitive and pattern-sensitive epileptics.
The group drew criticism more recently for reportedly masterminding attacks against Amazon.com, PayPal, MasterCard, Visa, and others as part of "Operation: Payback," a campaign that came out in support of WikiLeaks after the companies cut services to the controversial group.
Authoritarian regimes are increasingly targeting hackers, online activists, and bloggers in an attempt to maintain control over the information narrative in their countries -- a narrative that, thanks to the rising availability of the Internet, is becoming ever more difficult to tame.