Geneva, 20 January 2010, The EBU has launched a Wiki to help broadcasters coordinate media aid to Haiti. The Wiki aims to help media organisations to deliver media aid more effectively and bring radio stations back on air quickly.
The Wiki is designed to facilitate coordination between broadcasters, international organizations and NGO's.
Radio is playing a vital role in Haiti following the earthquake. EBU Members have been helping local broadcasters to get back on air in order to strengthen the sense of community and to provide Haitians with the comforting sound of familiar voices.
They are helping families to locate missing relatives, as well as providing crucial information about emergency healthcare, food and water aid.
Even before the earthquake, radio was Haiti's most popular medium. It is estimated that half of the population do not have sufficient literacy skills to read newspapers, while a lack of electricity means there is no television in many households. 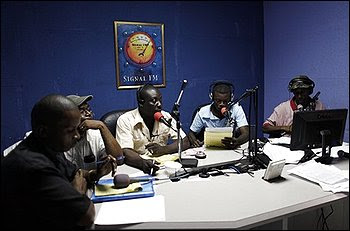 PORT-AU-PRINCE, Haiti -- The caller from Boston was desperate.
She had just received a text message Tuesday from a friend trapped in the rubble of a Port-au-Prince school and needed to get the news to rescuers, the Haitian government, the world.
She called the right place: Signal FM, the only radio station in the city that has broadcast nonstop during the earthquake. Its building, transmitting equipment and antennas escaped damage, and the station has been a key source of information since the magnitude-7 temblor wrecked Haiti a week ago.
Day and night, journalists and disc jockeys announce names of missing persons and news of open stores and dead celebrities, while calmly taking frantic calls and e-mails from both home and abroad.
Outside, people crowd the station's parking lot with crumpled handwritten notes, pleading for the announcers to read the names of their missing loved ones or a location where hungry people need relief.
"The radio station is the people's life right now," said 56-year-old Roselaure Revil, a Haitian who runs a small church aid program that is out of food, water and clothing. "Without the radio station, the country is dead. Without the radio station, we can't communicate. We don't have anything."
Even before the earthquake, radio was the nation's most popular form of media. About half of Haitians are said to be illiterate, so they can't read newspapers, and a lack of electricity in many households means television is not an option.
Stations like Signal FM, which broadcasts nationwide from the capital's Petionville neighborhood and on the Internet, also highlight how painfully absent the government has been. President Rene Preval has not addressed the nation about the disaster live on any media, opting instead to send Signal FM a cassette tape of remarks the day after the quake.
"Radio stations are holding the country together," said Carla Bluntschli, an American who has lived in Haiti for 25 years. She showed up at the Signal FM studios Tuesday trying to get the word out about her neighborhood's need for food and water. "They're kind of replacing the government, in a sense."
Out on the fetid and dusty streets of Port-au-Prince, it's common to see earthquake survivors trudging along with tiny transistor radios pressed to their ears.
On Tuesday afternoon, Bernardin Abady walked by the crumpled presidential palace - just hours after Navy helicopters landed U.S. troops on the lawn - listening to his radio with an intense look on his face.
He had Signal FM on.
"The better you're informed, the fewer problems you'll have," said Abady, a 52-year-old electrical technician.
According to Internews - a California-based group that helps people in poverty and disaster-torn countries get media and information access - 26 radio stations were up and running in Port-au-Prince as of Tuesday. Some are only broadcasting a few hours a day, while others play mostly music or religious programming.
Signal FM is one of the few broadcasting news 24 hours a day.
That's key for citizens who have lost everything, said Jacobo Quintanilla, an Internews project director, who is in Haiti working to connect aid organizations with broadcasters.
He said he was encouraged by a group of people clustered around an SUV in downtown Port-au-Prince, listening to Radio Caraibes from a boom box atop the car.
"This is as important as providing food, water and shelter," he said. "It's building confidence and trust that someone is listening to their problems."
The broadcasters at Signal FM listen to the woes of the city; almost all of the staff are physically OK but continue to take calls and messages from the desperately needy or the grief-stricken.
In the case of the Boston caller, it was unknown whether anyone tried to save her friend. The radio station has no time to follow up on every call it broadcasts for help.
"I tell all the people here, don't stop working," said Mario Viau, the station's owner and director. "When you stop working, you start thinking."