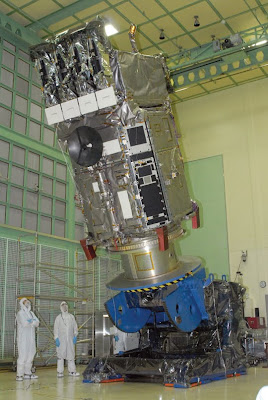 All life on planet Earth owes its existence to the sun. The sun's rays are where we derive our vitamin D and where most plants get their energy to go through photosynthesis. It was worshipped as a deity by ancient cultures and its power is now harnessed as a source of renewable energy.
The sun is a star at the center of our solar system. Its mass makes up more than 99 percent of the mass of our solar system and is 109 times the size of the planet we call home. More than 1.3 million Earths could comfortably fit inside the sun. Its core can reach temperatures of 27 million degrees Fahrenheit. With all that we now know about this bright star, there are still many areas of the sun that are an enigma to us.
New Mexico's climate and clear skies make it an ideal location for stellar and solar observations, and scientists around the globe are taking advantage and employing the expertise of local researchers in finding out everything they can about the sun - from the inside out. "I think New Mexico is really coming of age in the field of astronomy in terms of what is happening at our individual campus and what is happening with our national and international collaborations," said Bernie McNamara, professor in New Mexico State University's Department of Astronomy. "We are actually at the stage now where New Mexico institutions are being sought out as collaborators."
NASA is about to launch a 15-year mission to study the sun continuously through satellites and telescopes and NMSU is set to play an integral part in interpreting the data collected from the instruments. From a single, ground-based telescope, the sun cannot be viewed once it sets, creating gaps in data collection. The main aspect of the soon-to-be-launched multi-billion dollar Solar Dynamic Observatory satellite is that it will allow the sun to be viewed continuously, said Jason Jackiewicz, assistant professor of astronomy at NMSU.
Researchers will use state-of-the-art instruments to study the oscillations on the surface of the sun as well as seismic data that will look inside the sun in order to find the source of solar events.
"The mission is designed to understand the magnetic sun," Jackiewicz said. "We are trying to predict when and where a sunspot will pop through the surface of the sun. If we can do that, it might give us an idea of how we can predict solar flares and other mass ejections."
Jackiewicz earned a spot on the SDO team, charged with setting up a data analysis pipeline to detect magnetic structures beneath the surface of the sun. "This satellite will provide us with the best data, by far, that we have seen in a long time," Jackiewicz said.
Astronomers at NMSU also are using grants from NASA and the National Science Foundation to help predict space weather in order to prevent damage done by solar magnetic storms to space-based and ground-based electronic facilities.
The National Solar Observatory, which has observation sites at Sacramento Peak in Sunspot, N.M., and at Kitt Peak in Tucson, Ariz., is consolidating its operations in anticipation of a new telescope based in Hawaii called the Advanced Technology Solar Telescope. When it is completed, the ATST will have the ability to study the smallest spatial features of the sun.
A second major new solar project that New Mexico may well play a role in is called the Stellar Oscillation Network Group. Led by a group of Danish institutions it aims to build eight telescopes around the world so that stars can be viewed continuously.
NMSU, in collaboration with other institutions, has applied for funding from NSF's Major Research Instrumentation Program to place one of these new telescopes at the Apache Point Observatory, in Sunspot.
SONG is fundamentally different from other kinds of solar missions because its telescopes will measure stellar oscillations through the motion of the star's surface. This will be done with a precision not before possible, McNamara said.
"The science behind this project is really unprecedented," Jackiewicz said.
The Air Force Research Laboratory is working to relocate its Space Weather Center of Excellence to New Mexico from Massachusetts. The AFRL is a major force in the state in solar and stellar research and its scientists are interested in teaming with an institution in New Mexico to continue their work.
McNamara said officials have spoken to researchers at the University of New Mexico and also plan to speak to researchers at NMSU to be a part of the partnership.
At NMSU, the 21st Century Space and Aerospace Cluster - made up of members from the astronomy, computer science, electrical and computer engineering, mechanical and aerospace engineering and physics departments and the Physical Science Laboratory - works to promote space-related education and research at the university.
The NSF has awarded several grants in New Mexico that focus on solar research, including projects at Los Alamos National Laboratory, UNM and NSO, where graduate students from NMSU and other universities work under the mentorship of renowned scientists. "Within New Mexico, we are gaining a strong national and international reputation in the field of solar physics that makes us an attractive partner," McNamara said.
As interest in the sun and its impact on Earth continues to increase, New Mexico is donning its sunshades and doing everything it can to stay at the forefront of revolutionary solar research.