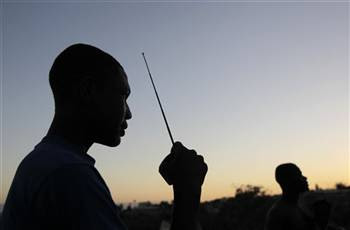 How the EIS helps save lives

Just a few days after the earthquake, EIS was able to direct injured Haitians via text message to one of the few hospital able to treat patients. The service also helped search-and-rescue teams to find people trapped in the rubble. In one case, a man trapped for five days in a collapsed building in downtown Port-au-Prince sent a text message, which the EIS team, working through the night with experts around the world, translated into GPS coordinates. A search-and-rescue team was dispatched and saved his life. Working with InSTEDD, an innovative humanitarian technology NGO, we created an information system allowing Haitians subscribed to the Digicel and Comcel networks to register with a simple shortcode - 4636 - to receive our free Creole-language alerts.
In addition to receiving critical news and information, Haitians can send, at no cost, text messages into the system. This ensures a stream of on-the-ground information of use to aid groups. We publicized the shortcode chiefly through local radio stations, including Signal FM, Melody FM, MINUSTAH Radio FM and Caraibes FM. The latter broadcasts from the sidewalk outside its quake-damaged building, sucking power off a car engine. As of the time of writing, EIS had received nearly 10,000 text messages from Haitians, all translated into English and geotagged by hundreds of global volunteers organized by "crowd-sourcing" NGO Ushahidi. The information is also available through RSS feeds.
Now that the search-and-rescue phase is over, we are working with the United Nations, the Red Cross, the government and others to help spread messages such as how to reduce disease risks, trace missing relatives and protect children. Entrepreneurs like Jacques Pierre, 25, help people to keep their devices charged. "Last week I had gasoline (for the generator) but the phones weren't all working," he said. "This week there's more gasoline out there and the phones are back, so the price is going down." Just down the road from Pierre's phone-charging operation, an outlet of Digicel, Haiti's biggest mobile carrier, offers a free re-charging service for about 40 people at a time. "I'm waiting for the money, I'm waiting for the money," one man shouts into his handset, on the line to relatives overseas. "We're hungry."

Haiti's cell phone networks have been quick to recover, even as other infrastructure remains crippled.
Robin Padberg, head of Comcel-owned mobile carrier Voila, told me most services were restored within a day of the earthquake. Digicel came fully back online a few days later. SMS networks proved most robust, which explains why Philippe Richardson, the coordinator of Port-au-Prince's emergency service, made SMS his chief point of contact with the capital's residents. There was simply no other way. "The City Hall collapsed, the mayor's house collapsed, the houses of our employees collapsed," he told Radio Metropole in an interview, announcing a 3702 2418 text hotline for residents. "Now we are homeless. We sleep looking at the stars, like you."
A straw poll of a group of 15 young men in Lepine on the outskirts of Port-au-Prince showed that 14 of them owned cell phones - and nearly all said they relied on them for news and information rather than radio. "It's less expensive because I don't have to buy batteries," said one. Prior to the earthquake, Haiti already had a track record of using SMS in novel ways. Two years ago, CECOSIDA, a network of local journalists, used the same 4636 number to disseminate messages about HIV/AIDS. Another project has flirted with SMS voting.

But while the number of EIS subscribers grows by the day, radio is still the most efficient way to reach a mass audience. That's why we turn to local broadcasters to help spread key information, often acting as a bridge between the international aid effort and local media. In this respect, our efforts mesh nicely with other initiatives launched in the wake of Haiti's quake. Internews, a media development organization, has been broadcasting a daily Creole-language program called "Nouvelles-Utiles" (News You Can Use) on 12 radio stations since January 21. The BBC World Service has just begun producing a daily 20-minute show out of Miami called "Connexion Haitienne".
All this is part of efforts to improve communications with disaster survivors led by Communications with Disaster Affected Communities (CDAC), an inter-agency working group comprising Thomson Reuters Foundation, Internews, BBC World Service Trust, the Red Cross, Save the Children, the United Nations Office for the Coordination of Humanitarian Affairs (OCHA) and others. "The issue we face is getting the message out to the affected community that aid is coming, that something is being done," said OCHA spokesman Nicholas Reader. Meanwhile, the U.S. military is distributing 50,000 solar- and crank-powered radios in the capital.
(continua)