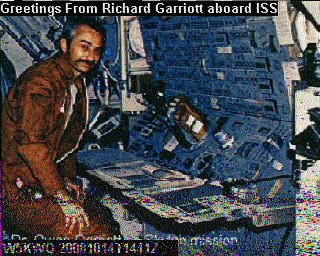 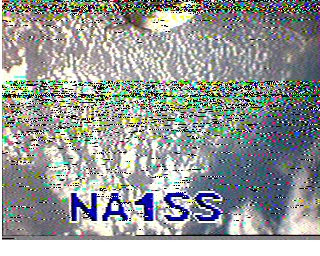 Richard Garriott, W5KWQ, took off for the International Space Station (ISS) on Sunday, October 12, becoming the sixth private citizen to fly with the Russian Federal Space Agency (RKA) for a short-term mission on the ISS. Not two hours after he arrived on the ISS on October 14, Garriott was making ham radio contacts, just as his father, Owen Garriott, W5LFL --the first ham to make QSOs from space -- did in 1983. Richard is scheduled to return to Earth on Thursday, October 23.
Amateur Radio on the International Space Station (ARISS) International Chairman Frank Bauer, KA3HDO, said that not only did Richard start making QSOs almost immediately after docking to the ISS, he also started SSTV operations. "We have had a number of image uploads on the [ARISS Web] site by hams from all around the world. A volunteer ARISS team is working 24/7 during Richard's flight to review these images, to understand how the SSTV operations are progressing and to include some of these images on the Gallery pages [on the ARISS Web site]. All uploaded images have been archived and are being reviewed." Bauer asked hams to continue to upload these images, as they help the ARISS team analyze and redirect the SSTV operations. He also said that a blog providing the latest ARISS information for Richard's expedition is available.
"Richard is really not supporting SSTV uplinks during his short duration mission," Bauer said. "The downlink is on the normal ARISS VHF downlink, 145.80 kHz." For general voice contacts, Bauer recommends the regular general voice frequencies: 145.80 for the downlink and 144.49 in Region 2 (Americas) and 145.20 for Region 1 (Europe, Africa, Middle East) and Region 3 (Australia, Asia) for the uplink. "Richard and Mike Fincke, KE5AIT, have been on the air on voice since shortly after docking [on Tuesday]," Bauer said.
"Richard is great!" said ARRL ARISS Program Manager Rosalie White, K1STO. "First he wanted to do a QSO with the mayor of his hometown -- Austin, Texas -- then he asked us to sponsor an Austin school QSO. He got the mayor to bring kids into the mayor's office for the QSO! Last I heard, several busloads of kids were being brought to the mayor's digs. And right after that QSO, he thrills hams with more QSOs. We've gotten several notes from hams who talked to Richard saying they had talked to his dad years ago, too. Pretty cool!"
Richard also chose the Budbrooke Primary School in Warwick is England to make QSOs with. "The QSO will enhance their technology and ham radio studies. ARISS Vice Chairman Gaston Bertels, ON4WF, in Belgium is mentoring this school," White said.
Richard has also scheduled a QSO with two groups who are in the ARISS queue: Pinehurst Elementary School in Ashland, Oregon, and the National Planetarium in Kuala Lumpur, Malaysia. The teacher at the Oregon school is leading the ham radio presentations and space-related lessons; John Spasojevich, AG9D, of Indiana is mentoring this school. The planetarium QSO will be coordinated by ARISS volunteer Sangat Singh, 9M2SS, using the planetarium's club call sign 9M2SS. Part of the planetarium's Space Challenge educational activities, the QSO is scheduled on the day Richard is required to pack his belongings for his return to Earth. If he becomes too occupied with packing and other required duties, Mike Fincke, KE5AIT, the commander of Expedition 18, could assist with the QSO.
Because Jamboree on the Air (JOTA) takes place on while Richard is on the ISS, he hopes to hook up on the air with Scouts. "Past experience shows that scouts love talking to hams in space," White said. "The ARISS Team feels the most important aspect of Richard's mission is to pique students' interest in science and technology through the ARISS QSOs."
Bauer explained that Richard Garriott's flight on the ISS is "a part of history. Some of you have asked why Richard is using his call sign for some QSOs and SSTV contacts, instead of the ISS station call signs. There is a long and proud history that is attached to the Garriotts. This includes ham radio in space and their personal call signs. Twenty-five years ago, Richard's father, Owen Garriott, W5LFL, initiated the first ham radio contacts from space on the STS-9 SAREX mission. Richard, W5KWQ, is following in his father's footsteps, using the ARISS ham radio system extensively on his first flight. Richard's call sign is actually his grandfather's original call sign. So you can see that this mission touches three generations of ham radio and two generations of ham radio in space!"

It was quite an exciting day for ARISS yesterday with the Expedition 18 crew docking and the start up of Richard Garriott's ham radio activities. Here are some updates and plans for ARISS during Richard's flight.
Richard, W5KWQ, fired up the radio and started SSTV operations just a couple of hours after docking. Prior to flight, Richard planned to support a slide show mode using the SpaceCam software and the SSTV interface box at the beginning of his flight. This is what you saw yesterday. Richard downlinked a number of SSTV images using Martin 1, a higher quality but longer transmit SSTV mode. The Russian team, led by Sergey Samburov, RV3DR, had requested testing several high quality image modes during Richard's flight, so don't be surprised if you see Martin 1 or other high resolution SSTV modes during Richard's flight. We asked Richard to move to the default Robot 36 mode for the time being and to space out the images once every 3 minutes to reduce the radio transmit duty cycle. Richard confirmed that he will support this. He also has transitioned to the VC-H1 as this will allow Richard to use the computer to support his Earth ops and still support SSTV.
We have over 300 image uploads on the Gallery site by hams all around the world! The ARISS team appreciates your volunteer support through all the SSTV images that have been uploaded. A volunteer ARISS team is working 24/7 during Richard's flight to review these images, to understand how the SSTV operations is progressing, and to include some of these images on the Gallery pages. ALL the images you have uploaded have been archived and are being reviewed. Please continue to upload these images as they help the ARISS team analyze and redirect the SSTV operations. You are welome to upload these through the gallery page:

We also have a blog available that provides the latest ARISS information for this expedition. That blog is located at:

You can also reach these sites through the ARISS website:

SSTV uplink/downlink: Richard is really not supporting SSTV uplinks during his short duration mission. The downlink is on the normal ARISS VHF downlink, 145.80.
General Voice Contacts: Use the regular general voice frequencies. 145.80 downlink. Uplinks are 144.49 in Region 2 (Americas) and 145.20 for Region 1 (Europe, Africa, Middle East) and Region 3 (Australia, Asia). Richard and Mike Fincke, KE5AIT, have been on the air on voice since shortly after docking yesterday.
Sleep Period Activity: We have asked the crew to turn packet on during sleep periods. Our intent is to keep SSTV active during their work day. The rationale for this is that we are having some issues with the software based (SpaceCam) SSTV system occasionally keeping the radio keyed down after an image transmission. And we have a limited set of Russian batteries available during Richard's flight for the VC-H1.
Additional SSTV Information: The computer-based SSTV can also support SSTV picture taking using a USB camera. We don't anticipate Richard using this as his primary SSTV operations for his mission will be with the VC-H1. The USB camera was checked out over the weekend by the Expedition 17 crew, where they took photos of themselves and downlinked these to the ham community.