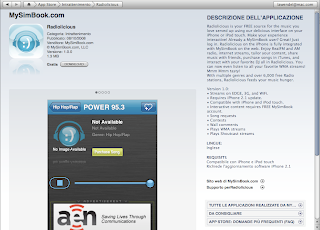 AUSTIN, Texas, Oct 20, 2008 /PRNewswire via COMTEX/ -- Now mobile radio listeners have a new way to tune-in local radio stations, anywhere their iPhone or iPod Touch is connected. Thanks to Radiolicious, a new native application player developed by MySimBook, broadcasters who stream their signal online can expand their local listener base, potentially by millions, and realize new revenue streams from mobile awareness-based advertising.

Find the link to the ITunes App Store at
http://phobos.apple.com/WebObjects/MZStore.woa/wa/viewSoftware?id=293225131


Though it is just a smiley face with headphones resting on an iPhone or iPod Touch screen Radiolicious represents a spectrum of features to attract and enliven a growing market of young people who are getting accustomed to having a mobile mall of new, entertaining and interactive content on their portable devices. This is particularly optimistic for radio, since a January 2008 study by M: Metrics showed that 74.1% of iPod owners listened to music on a mobile phone. Now those users, and others, will be able to pick from thousands of radio stations, playing every kind of music.
What is probably going to surprise iPhone users and broadcasters is the cost of having Radiolicious: Free. MySimBook foots the bill. Users simply link to iTunes and download the application player. Radio stations receive all of the hardware, software and set-up at no cost, just paying a low monthly service fee to be in system. As everybody knows economics dictate that somebody, eventually, has to pay.
It is behavioral characteristics of young consumers that are creating the commerce in mobile phones and Radiolicious seeks to amplify the trend. As the data shows, transition from iPod players to iPhone has been rapid and broadly spread. Ever-evolving technologies have built-in expectations for target consumers that their familiar features will be available and at their fingertips. The abilities to join a community through shared user profiles, interact with social users via text and chat, interact with radio stations, enter contests, bookmark favorite stations, browse music genres, subscribe to content and make music purchases are incorporated into the Radiolicious application.
MySimBook points to key facets of this mix of clicks that offer advertising and direct marketing openings. When users create profiles databases are born for sponsors. Stations can stream not only their own brand messages, song titles, artists and others, but paid advertiser messages can flow to the Now Playing screen. When users purchase applications, song tracks or other content proceeds of the sale may be split among the Radiolicious providers, giving station owners a share of the action.
Along with extra revenue potential stations are given a clean slate by Radiolicious to create their own user experience, separate from the traditional radio signal. They can create interactive campaigns, contests and listener-loyalty programs for the station and its advertisers. (Built-in GPS targeting tracks down listeners, wherever they are standing in the world.) It is believed that thousands of radio station staffers will come up with entertaining and cool content as audiences begin to grow and fresh ideas flow.
Being the company at the heart of this new network MySimBook is responsible for hosting all of this streaming content on its secure servers, but also recruiting the participating radio stations. If they hope to satisfy millions of iPhone and iPod Touch users a big selection of stations, music and other content will have to be available. Consumer expectations are so high these days that keeping up is a constant pursuit.
Accordingly the company has announced pending agreements to promote adoption of Radiolicious by station affiliates of two national broadcast networks. This daily encouragement campaign is a strategic move to grab a share of the mobile marketplace at time when traditional radio budgets are being cut by advertisers. The Internet has been a major cause of diminishing revenues as local and national advertisers hone-in on consumers using interactive websites and search marketing to reach prospects.
MySimBook contends that Radiolicious is a prime example of how radio can more effectively compete in the new media environment without making major changes or investments. Going after new listeners and reaching old listeners in a new way Radiolicious is a candy dish marketing approach that offers users a handful of different flavors. From the standpoint of radio broadcasters this may sweeten their listeners' tastes and their bottom lines.

About MySimBook:
MySimBook is the leading radio station super network, and content aggregator, both online and on the iPhone and iPod Touch devices. MySimBook is building a community that lets members broadcast themselves to both individuals and groups through text messaging and social networking. Through its Radiolicious native application player MySimBook is enabling millions of users to experience live streaming radio signals on their iPhone and iPod Touch devices.