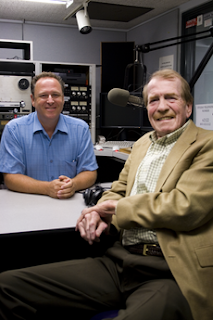 Professor Haney Howell (front) and instructor Mark Nortz sit in WINR radio station. The professors produced a documentary over the summer that will premiere on ETV this Thursday.


After two and a half years of production, 83 hours of editing and a total of three weeks of interviewing, mass comunication instructor Mark Nortz and professor Haney Howell finally have something to show for their hard work: All 28 minutes and 11 seconds of it. This summer Howell and Nortz produced a documentary entitled "Losing Their Voices: A Look at Local Radio," which will premiere at 10 p.m. tonight on ETV. The documentary mainly focuses on the decline of small town radio stations and how they are surviving in the industry.
Howell, who got his start in radio, said he was approaching his 50th anniversary in the business when he first got the idea for the documentary. He went back to his hometown and noticed that the local radio station had shut down. "My little hometown station had lost its voice," he said.
Howell was curious about its closing and wanted to see what was causing some radio stations to survive while others disappeared.
Creating a documentary was a project Nortz always wanted to work on but never had the chance; so when Howell mentioned the idea, he jumped at the opportunity.
He and Howell both teach Introduction to Mass Communication. One of the reoccurring topics they noticed was how Clear Channel Radio bought many of the local radio stations and it seemed these small towns were losing their voices. "We wanted to see if it was true or not," Nortz said. And they did. Together they traveled around the state of South Carolina to talk to radio stations from Greenville to Columbia and Gaffney, as well as stations in York County. "We covered a lot of ground and a lot of money," Nortz said. Howell added they were able to include a diverse set of stations in their project.
In the end, they found a common trend that keeps radio stations alive and thriving: They all kept personal ties with the community. "If the power goes out and you want to know where you would you go to get ice, you're not going to listen to satellite radio," Howell said. "I think there is a niche." 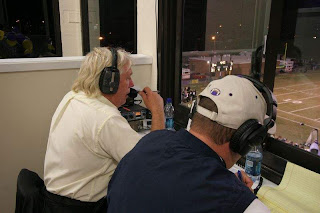 Steve Stone, left, works in the broadcast booth during a Rock Hill-Northwestern football game. High school football is one of the ways local radio stations connect with their audiences.
Stevens' morning show on WBCU-AM 1460 in Union has become as entrenched in the county as high school football.

Mike Stevens thinks telephone lines would light up during his morning radio show if he forgot to announce the school lunch menu. The small station celebrates its 60th anniversary next year, and Stevens hopes there are more good years to come. 'Our listeners look at us as a member of the family,' he said. 'We are very connected to our audience. Local radio stations have to be.'
A 'Southern Lens' documentary on ETV dealing with the plight of local radio stations in the midst of industry changes premieres at 10 p.m. Thursday. 'Losing Their Voices' details how those changes, including satellite and digital radio stations and multistation owners, are swallowing up the smaller, local stations.
Nine radio stations across the state, including WBCU and the former WAGI-FM in Gaffney, are featured in the documentary. Interviews were done more than a year ago, before WAGI was sold. 'Small stations are at risk for losing their voices, and everyone on the program selection committee felt that this was an important issue,' said Amy Shumaker, 'Southern Lens' executive producer. 'It is important to have as many diverse voices as possible in a democracy.'
Shumaker thinks the documentary shows that the local radio personalities interviewed loved their jobs and their communities. 'Local radio stations support listeners, advertisers and the community and are a service,' said Dennis Fowler, general manager of WEAC-AM 1500 in Gaffney. 'Satellite or large companies may put a signal into the area, but they don't care about service to the people, such as high school football games, school closings, storm warnings and traffic reports.'
Last year, Fowler purchased WEAC, which was a sister station to WAGI-FM, to keep its operations local. He is working to expand program hours. He said that with satellite or multistation owners, listeners lose the local connection and identity that radio was intended to provide. He said stations used to be set up to serve the public interest, as trustees of the community.
Strong community ties should keep both local stations operating. Stevens and Fowler think their stations aren't in danger of dropping out of the radio industry. 'Local personalities walk the streets, and they go to church with people in the community, and those people recognize them as part of their families,' Fowler said. 'People feel like they know you.' Stevens said WBCU is the only radio station in Union. He said the station's staff is committed to serving its listeners.
'Programming is strictly to the community,' he said. 'We are trying to keep our community well-informed, and this station has done very well. Let me miss announcing the school lunch menu one morning, and I will have people calling me.'

A voice of Chester County has been silenced, at least for the time being.

We're talking about the sale of WCOJ 1420 to Holy Spirit Radio Foundation Inc., a transaction that was announced earlier this week, much to the chagrin of local residents. The new owners provide Catholic-based programming throughout the state of Pennsylvania and parts of New Jersey.
And now you can add Chester County to that list as well. Beginning this week (Oct. 7 is the target date), WCOJ will operate as a radio affiliate to EWTN Global Catholic Network and become a home for Catholic programming. A large chunk of the station's programing block will include ETWN radio programs with shows of Catholic interest and local announcements for parishes and parochial schools filling out the schedule.
The whole thing leaves us feeling a bit ... well, confused. We'd hate to be misunderstood, so we want to be clear: We're happy to see Catholic programming coming to the area, because it fills a void that currently exists. But we hate to see it come at the expense of WCOJ, a local institution of radio if there ever was one.
For almost 60 years, county residents have been able to tune into WCOJ for updates regarding, weather, traffic, school closings and local news. Programming had a local bent, with popular shows like Rob Henson's "The Big Show" discussing issues relevant to Chester County residents. But those days appear to be over. Henson and other staffers (many of them longtime employees and volunteers) found out they were done at a staff meeting held last week.
The outpouring of support has been tremendous. Phones have been ringing off the hook all week, according to station employees, and e-mails have been pouring in. Unfortunately there's not a whole lot that can be done about it at this point. Details of the sale are being finalized and the locks at the station have already been changed.
We'd love to see the spirit of WCOJ continue on in some capacity, even if it means a transition to Internet radio. The format has enjoyed increasing popularity over the years, and based on the support for the station, there is still a need for the niche it serves.
We'd like to encourage some former employees of WCOJ to look into the logistics and make it a reality. Chester County needs its voice, as it has been through the years.
Don't let WCOJ die.

Two years ago this month, I traveled to Hobart, Ind., to help celebrate the 50th birthday of an old college friend.
Dan and his wife, Sandy, have known one another since high school and together have raised three near-perfect children (daughter Lisa tends to go a little heavy on the cell phone calls to mom, but what are you going to do?) The kids all go to the same school where Dan and Sandy graduated and where Dan, whom I met the first day of my college career, played football. When I arrived that Friday in October, in fact, everyone was anxiously anticipating the playoff showdown between the Hobart High Brickies and their cross-county rivals.
The game (which the Brickes won, by the way) was broadcast on the local radio station, WEFM-FM. While we sat in Dan and Sandy's living room and caught up with one another, Sandy made regular trips to the kitchen to listen to the radio for the score then touch base with various family members by phone to update one another and generally see who could voice the biggest distaste for the opposing squad and its hated head coach. It was a slice of small-town American life that we sometimes think no longer exists but really does.
I'm telling you this because until Friday of last week, that same scenario regularly played itself out all in living rooms and kitchens across Chester County on Friday nights or Saturday afternoons (except the part about me being present.) High school football fans tuned in to Chester County-based WCOJ-AM and caught the action in Ches-Mont games, as broadcast by Bill Mason and John Aberley, cheering on their alma maters and heaping scorn on the opposition.
It is unlikely that will happen anymore, now that WCOJ has been sold, down the river, to a religious programming radio system that intends to air Catholic-oriented shows. Holy Spirit Radio laid off all the employees of WCOJ on Tuesday, and has not indicated that it intends to keep any of the current programs, including the football broadcasts.
Truth be told, I didn't listen to WCOJ very much. I appeared on broadcasts a couple of times, discussing court stories with Steve Karp and current events on "Circle in the Square." I didn't tune in to the Ches-Mont broadcasts because, frankly, I don't have a dog in that fight. But I know my friend Nick swore by WCOJ's Phillies broadcasts and that the folks at the DK Diner viewed it as an invaluable resource for finding news stories to argue about over eggs and sausage.
And it made me feel good about the community I live in, knowing that WCOJ was out there touching people's lives from Pottstown to Oxford with information from the sublime ("Ron's Swap Shop") to the ridiculous ("The Paranormal Cafée"). Say what you will about the county's last remaining local radio station, WCHE-AM, but it certainly lacks the geographic reach and broadcast signal of its former neighboring rival.
The loss of WCOJ's local programming isn't going to be a topic of discussion at the next presidential debate, but I would like it to be. I would like to tell the candidates how the little chips at our sense of community eventually add up to a large feeling of displacement and loss. I would like to make sure they know how important it is to our small world to hear the voice of the local morning broadcaster let you know what the weather was like outside your very own window and whether school was going to be cancelled because of it.
Mostly, I would like to tell them that being able to catch up on the Downingtown East versus Downingtown West score at halftime is just as valuable as listening to someone deliver a sermon.