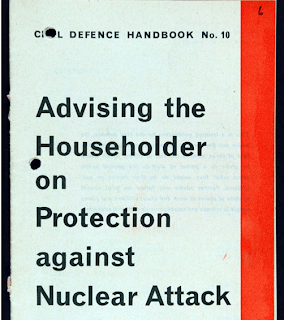 This is the BBC: How to survive the A-bomb
Oct 3 2008 WalesOnline

A BROADCAST script formulated in the 1970s for use in the wake of a nuclear attack was published for the first time today.

Details of the announcement, written by the BBC with various government departments, were set out in files released by the National Archives.
Documents also chart discussions as to what should be said, and how not to alarm the public in case they thought Auntie had been “obliterated”.
In a letter from June 1974, Harold Greenwood, from the Ministry of Posts and Telecommunications, wrote: “During the Second World War we came to recognise the voices of Stuart Hibberd, Alvar Liddell and other main newsreaders.
“I would expect that in the period of crisis preceding an attack a similar association of particular voices with the authoritative ‘Voice of the BBC’ would develop.
“The reassurance that ‘the BBC is still there’ would not be gleaned from a recorded announcement by an unfamiliar voice (or one that was familiar in 1974 but had not been heard for some years).
“Indeed, if an unfamiliar voice repeats the same announcement hour after hour for 12 hours listeners may begin to suspect that they are listening to a machine set to switch on every hour (or even that it has got stuck) and that perhaps after all the BBC has been obliterated.”
The Cabinet Office recommended adding in live local commentary to reassure listeners that they were not being fobbed off with a cassette recorder.
The script includes advice to “stay calm and stay in your own homes”.
It says: “This country has been attacked with nuclear weapons. Communications have been severely disrupted, and the number of casualties and the extent of the damage are not yet known.”
The public are instructed to turn off fuel supplies, conserve water and not waste it by flushing the toilet.
The script continues: “Remember there is nothing to be gained by trying to get away. By leaving your homes you could be exposing yourselves to greater danger. If you leave, you may find yourself without food, without water, without accommodation and without protection.”
The meticulously-drafted announcement was intended to be repeated every couple of hours.
It has previously been revealed that the BBC stockpiled entertainment programmes to boost public morale in the event of a war.
In the event of a nuclear attack, staff were to stay in hiding for 14 days before it was safe to leave.

What do do in a nuclear attack

Enough to make anyone who remembers the Cold War shudder – here is the script to be used in the wake of a nuclear attack.