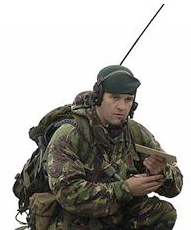 Soldiers' lives are being put at risk by failings with the Army's £2.4 billion radio system, senior generals have been warned. By Sean Rayment, Defence Correspondent 23 Aug 2008

An infantry commander in Helmand described the system, the second most expensive piece of equipment in British military history after the RAF's Eurofighter, as "astonishingly bad".
The radio's coverage sometimes does not extend from one side of a base to the other, while a shortage of batteries means soldiers are being ordered to turn off radios until they come under attack.
The Bowman communication system was supposed to revolutionise command and control in the Army. Its encryption software allowed commanders to talk securely for the first time without the need to encode messages. But in Afghanistan Bowman has been written off as a failure by many senior officers.
Lt Col Nick Borton, the commanding officer of the 5th battalion the Royal Regiment of Scotland (5 Scots) told Gen Sir David Richards, the Army's second most senior officer, that Bowman "was a broken system".
The infantry commander made his criticisms known during a visit to 5 Scots' headquarters in Musa Qala by Gen Richards, Lt Gen Graeme Lamb, the commander of the Field Army, and Brig Mark Carleton-Smith, the British task force commander in ­Helmand.
Col Borton told the senior officers that Bowman was hampering operations against the Taliban. He complained that the radio's coverage in Helmand had been reduced to under three miles, when it should, in theory, be limitless.
Col Borton said: "The coverage on VHF is just a few hundred metres, so we use HF or UHF but that only gives us five kilometres. In some cases we cannot even get coverage from one side of the base to the other."
Col Borton also said that a shortage of batteries meant that in an effort to save power, junior commanders were often forced to turn the radios off until they came under attack. He added: "The only way to tell how much power a battery has left is to remove it from the radio – that's a serious design fault. In a bid to preserve power, my section commanders only have their radios working when they are in contact. As far as I am concerned, Bowman is astonishingly bad; it is a broken system," he told commanders.
Col Borton raised his concerns over Bowman when Gen Richards asked him directly what problems his unit was facing. All of the senior officers present at the meeting, which was witnessed by The Sunday Telegraph, accepted Col Borton's comments without question. Junior officers in Col Borton's battalion were equally critical of Bowman, describing the radio as "utterly useless".
One said: "The only good thing about Bowman is that it provides secure communications. But what is the point of that if it doesn't work? We could end up with a situation where soldiers are being killed or injured because of communication problems."
Another added that troops would prefer the 20‑year-old Clansman system, which Bowman replaced, because the older radio was more reliable.
Bowman has had problems since it entered service with the Army in 2004. It was 10 years late and almost £500 million over budget. When the communication system was introduced, frustrated soldiers said Bowman was an acronym for "Better Off With Map and Nokia". It has also been reported that some soldiers have suffered radiation burns when transmitting.
Bowman's reputation was further undermined in a report by the House of Commons public accounts committee last year which found that despite being better than the previous radio system, it was far too heavy for foot soldiers. MPs said the project team which developed Bowman consistently failed to listen to senior infantry commanders who were concerned about the radio's weight and whether it was portable.
However, senior officers are at a loss as to why Bowman should not work properly in Afghanistan, given that trials found that the system functioned in both desert and mountainous environments.
The Ministry of Defence said: "Bowman has many advantages over its predecessor system, but the harsh conditions and challenging terrain under which it operates in southern Afghanistan would seriously stretch the performance of any modern digital radio communications.
"Improvements have already been made to enhance Bowman connectivity in the Musa Qala area and further improvements will happen as solutions are identified. Bowman, however, is just one part of an array of systems used in theatre to provide a robust communications network which allows commanders at all levels to exercise required command and control."