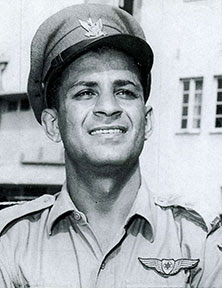 By The Associated Press

Abie Nathan - Israeli peace pioneer, pirate radio station founder and former Royal Air Force pilot - has died in Tel Aviv at the age of 81, officials at the city's Ichilov Hospital said Wednesday.
Nathan burst onto the world of Middle East diplomacy in 1966 with a dramatic solo flight to Egypt in a rattletrap single-engine plane, more than a decade before Israel and Egypt signed a peace treaty.
Although he failed in his initial bid to talk peace with the Egyptians, his daredevil escapade won the affection of many Israelis, and he launched a long and often eccentric one-man crusade to end the Arab-Israeli conflict.
Over time, he earned a reputation as a maverick peace activist who often took diplomacy into his own hands. He was called a crackpot and a prophet. But many admired the daring of the former Israel Air Force fighter pilot as he pounded on Egypt's doors, sailed his pirate radio ship into hostile Middle East waters or risked his life on hunger strikes for peace.
Yossi Sarid, the former leader of the leftist Meretz party, said Nathan paved the way for Israel's peace movement. "He was ahead of his time, and he did everything himself," he said.
Abraham Jacob Nathan was born April 29, 1927 in Iran, educated in India, and served in Britain's Royal Air Force as a fighter pilot, before joining the Jewish immigrant influx into newborn Israel in 1948.
A short, dark man, he flew for Israel's national airline and ran an art gallery and restaurant that became the center of Tel Aviv's bohemian life. His American-style diner even helped pioneer the hamburger in Israel.
Convinced that people power could succeed where the diplomats had failed, Nathan bought a 188-foot, 570-ton freighter that was partially funded by John Lennon. He anchored it off the coast of Tel Aviv and turned it into a pirate radio station, The Voice of Peace, with a mix of pop songs and peace messages.
"Shalom, salaam and peace to all our listeners," Nathan declared in his maiden broadcast in 1973. "The Peace Ship is a project of the people. We hope through this station we will help relieve the pain and heal the wounds of many years of suffering of the people of the Middle East."
Over the next 20 years, The Voice of Peace became especially popular among youth. It was the only radio station in the Middle East that broadcast music from the world's Top 40 charts and used English as its primary language, yet offered both Israeli and Arabic news.
Apart from his peace efforts, Nathan flew or shipped emergency supplies to victims of war, earthquakes and famine around the world, including to Biafra, Cambodia, Nicaragua, Lebanon and the former Zaire.
In the 1970s, Nathan went on repeated hunger strikes to try to force the Israeli government to make concessions for peace with Egypt and talk to the Palestine Liberation Organization.
He saw the first wish come true when Israel and Egypt signed a peace treaty in 1979. But it would be years before Israel would reverse a law making meetings with the PLO a crime. Nathan broke the law several times by meeting with members of the PLO.
In recent years, he had been confined to a retirement home and had rarely been seen in public. In a 1996 interview with The Associated Press, Nathan said that during one of his prison hunger strikes, he was certain he was going to die. He bought a grave and a tombstone.
When asked what he would want written on the stone, he replied "Nisiti" - the Hebrew for "I tried."
Nathan was twice married and had one daughter, Sharona. Funeral arrangements have not yet been finalized.

The last of the dreamers of peace

It was a Saturday afternoon in the late 1980s. We entered The Voice of Peace's rickety Subaru truck and drove to Gaza to Mahmoud Zahar's house. Afternoon coffee with the Hamasnik, just imagine. Imagine that once it was possible to visit Zahar on a Saturday afternoon. Just think  there once was a man here who dreamed of peace.
Picture a pilot who never drove a car. All those things sound like hallucinations now, even more than they used to.
Abie Nathan was perhaps the only Israeli who felt guilty about 1948. As a volunteer pilot from overseas he had bombed Palestinian villages and then wanted to make up for it. He didn't shoot and whine about it but actually tried to make amends.
Today that sounds like science fiction. Israeli? Very doubtful. He lived among us for decades, but Abie dreamed in English and thought in Hindi. He helped Palestinian children, but also hastened to every disaster area in the world. In that, too, he was perhaps the last Israeli who saw compassion and aid as global notions. Our Mother Teresa.
Like another central figure in the Israeli peace movement, Uri Avneri (may he live long), he was both a bohemian and an ideologist. No party was comparable to Nathan's roof parties in North Tel Aviv's Zirelson Street. Nobody could be as treacherous as us, who lived it up at his parties and then abandoned him after he became sick and wheelchair-ridden many years ago. There are dozens of people around town who should feel
deeply guilty today for neglecting him so criminally, including this writer.
In the footnotes of history, Abie will be remembered as the man from California, the city's first hamburger joint; as the man who took the peace flight to Cairo and was erroneously reported to have crashed. And of course, as the man from "Twilight Time," the unforgettable program on the Voice of Peace, with its daily moment of silence - perhaps the last time we heard silence here, not just incessant intolerable noise.
When the Peace Boat was sunk by its founder, Abie and all his charm sank with it in the public awareness.
Indeed, he had charm. A rare combination of naivete and organization skills, an Israeli yet a man of the world, a bomber and a fighter for peace. When they lay him to rest I'll remember all those spectacular contradictions. Above all, I'll remember the other days, when you could drive to meet Zahar on a Saturday afternoon, bring him toys for Gaza's
children (in the trunk of the jalopy that kept pulling to the left), and dream of peace. None of this is possible anymore, perhaps because Abie is no longer with us. He hasn't been for a long time.