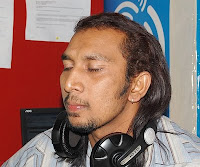 NEW DELHI : Big 92.7 FM's Radio Jockey (RJ) Dheena has broadcast live on radio continuously for 168 hours and entered the Guinness Book of World Records, bettering the previous mark by 33 hours.
He is "ecstatic" after breaking the existing world record of 135 hours set by Italian RJ Stefano Venneri in 2007. Dheena began his on-air marathon Aug 21 at 5 a.m. that ended at 5 a.m. on Thursday.
Though Dheena, who hosts "Big Vanakkam" on Big FM's station at Chennai, broke Venneri's record at 8:01 p.m. Tuesday itself, he continued on to set a new record which would be tough to break.
"I didn't want to be a sprinter. I wanted to be like a marathon runner who would lead by hours and I have done that. I wanted the target to be very high so that for the next five to 10 years, no one should even think of attempting this," Dheena told media.
This was not the first time Dheena attempted an on-air marathon. In August 2007, he had worked non-stop for 92 hours and seven minutes.
For his Guinness record, the FM station ensured all medical requirements for Dheena. A team of physicians was present to monitor his health.
"I used to get five minutes rest in every hour and after every 12 hours, I used to get an hour's interval for myself.
In that time, I used to take a nap. I kept eating something in between and that's how I managed," said Dheena, who joined Big FM in 2006.
Before taking on this challenge, Dheena prepared himself physically and mentally.
"I undertook rigorous yoga practice to boost my mental endurance and also went to the gym regularly to keep fit and be awake for so many hours," he said.
Dheena is overwhelmed with the response of his listeners who gathered outside the Big FM office to meet him.
He said: "I have got a tremendous reaction from the people in Chennai and I have managed to get a huge fan following.
They were constantly concerned about my health and me. It was really motivating. People across ages came over to meet me, called me and helped me through this feat."
He says that the experience has taught him to be "patient, focussed and to concentrate with no sleep".