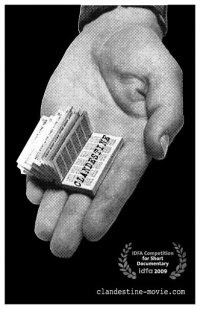 10 Questions with Gideon Kennedy & Marcus Rosentrater of CLANDESTINE (with Code!)
In the early days of film the norm was to store a print for a few years after an initial run and when space was needed, to burn it. Studios would keep the hits they knew they could re-release every few years, but Hollywood had no problem destroying hundreds of films they no longer had any financial use for--to be fair, they did keep the scripts around so they could remake them. Unfortunately, it wasn't until the 1960s that film preservation really started in earnest and it really wasn't till the 1980s there were enough techniques developed to salvage the large number films that were literally crumbling. One hundred plus years of filmmaking has disappeared, and is disappearing, and no one will see it.
What directors Kennedy and Rosentrater have done is to go beyond preservation and have, in the tradition of oral storytelling, reordered the familiar to craft a new narrative that's grounded in reality, tinged in paranoia and intimately personal.
CLANDESTINE
Gideon Kennedy & Marcus Rosentrater - Directors
Become a Facebook Fan
Watch the Trailer
If you could describe your film using only 3 words, what would they be?
ECHO HOTEL PAPA (that's also a clue!)
Is there a character or subject in your film you most identify with? Would you switch places with them just for a day?
Can't really say without generating unwanted suspicion.
What's the one thing about your film you're most proud of?
The fact that we were able to weave sounds and images from hundreds of sources into one seamless film that tells two stories, is really something to be proud of. That, and a genuine paranoia of the FBI.
When you first screened your film, was there a moment, scene or character the audience reacted to, that surprised you?
Because our film is half non-fiction and half narrative fiction, many people assume that the narrative half is documentary and therefore autobiographical. It is not. However, it is based on research around the thoughts, feelings and reactions people have towards an adulterous parent or role model.
What do you want audiences to take away from your film?
We've found that many viewers leave reflecting on a parent or role model who has let them down, or somehow grew out of favor. On the documentary side, it's been fun to see people's reaction to Numbers Stations; their surprise that governments are still br [transmission cut off]
Who are the directors, filmmakers and artists that most influenced your film or yourself?
Hopefully a viewer, watching our film, would see the influences of Chris Marker, Craig Baldwin, Rick Prelinger, Laura Kissel, Bill Morrison, Peter Watkins and perhaps even Jay Rosenblatt.
Who is the unsung hero of your film and why?
Adolf Tolkachev. In addition to being one of the most productive spies in history, his story and personal life are the most reminiscent of the story told in the narrative segments. His greatness is relative to which side you are on.
Where do you see your film in 5 years?
Gathering dust on archive.org, from which most of it came.
Someone has to go to the bathroom during your film, and they have to miss part of your film. Do they miss the beginning, the middle or the end?
Leave at the beginning, and don't come back. In a word, ABORT!