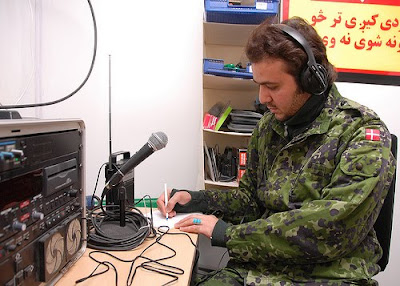 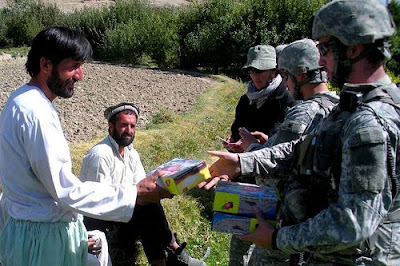 Regional Command-West Opens Radio Station in Herat
4/22/10 | ISAF Public Affairs Office
HERAT, Afghanistan (April 22) - Music, local news and in-depth discussions on important social issues and local culture are now more prevalent in western Afghanistan.
A NATO radio network station began broadcasting from Camp Arena recently, offering public-interest content to help local residents better understand the purpose of ISAF forces in Afghanistan.
Radio is the main tool to disseminate information throughout Afghanistan and can reach people even in the most remote areas, easily crossing the boundaries of literacy and distance. The radio station will provide an important contribution to the growth and social development of the country and provide immediate information in case of emergencies.
The broadcast selection is chosen by local personnel and closely connected with the target audience, the population of Regional Command-West's area of responsibility. For this reason, all of the programs are broadcast exclusively in the Pashto and Dari. Mr. Guido Crosetto, under-secretary of state for the Italian Ministry of Defence, turned on the "On Air" light and spoke over the air during the ribbon-cutting ceremony Monday.
"Sada and Azadi West Radio [The Voice of Freedom - West]," said Mr. Crosetto, "is a media that relies entirely upon an Afghan journalism staff and offers objective information on Afghanistan to all the citizens of the four western provinces - to city dwellers and those living in more isolated communities. The programming of Sada and Azadi Radio will pay attention to your proud traditions and prestigious culture without neglecting the specific needs of your everyday life. It is a service tool and an entertainment tool; a new voice that will increase the conscious participation in the democratic life of this country."
The Task Force Commander, Maj. Renato Rocchetti, directs and manages the new radio station, which is manned by an Italian Air Force NCO and three local journalists. Other staff members will be added soon.
The station was developed, with Italian funding, by the men and women of the Regional PSYOPS Support Element (RPSE), composed by personnel of 28th Regiment "Pavia," a unit specializing in operating communications equipment.
***
Radio Sada-e-Azadi: new look, more coverage and more programs!
KABUL, Afghanistan - Radio Sada-e-Azadi 88.5 FM, the International Security Assistance Force (ISAF) radio station, has revamped its programming. It will now air more news, more sport, more informational topics and it has also renewed the popular morning show.
Starting on the 13th June, the news bulletins will start at 5am and continue until 10pm each day. Due to popular demand, there will also be summaries of headlines every half-hour with weather forecasts and currency exchange rate updates on the hour. Sports will also feature more heavily, with a magazine show every morning at 8.30am.
The morning show, called “Sunrise”, is a 2 hour program with practical information for listeners on all manner of subjects which will include business news, one-hour health programs, and two nature programs a week. And now, everyday at 6.30am and 6.30pm, there will be special programming dedicated to the youth audience.
Radio Sada-e-Azadi 88.5 FM is also expanding its broadcasting area in the coming weeks. Listeners from Badghis and Takhar provinces will soon join those already listening in Herat, Farah, Kunduz, Balkh, Lowgar, Kabul, Baghlan, Maidan Wardak, Faryab, Badakhshan, Parwan and Ghor.
***
German radio provides information, entertains troops
KABUL, Afghanistan - “Good morning Vietnam!” is the title of the movie and the line Robin Williams made famous in his 1987 war movie. But for the Germans broadcasters based at Regional Command North, they begin their day by saying “Guteu Morgen Afghanistan!” That’s what you’ll hear if you set your dial to German Radio Andernach, 107.5 FM.
The radio station is part of Germany’s Federal Armed Forces Broadcast Service and provides entertainment and information to the German troops serving with the International Security Assistance Force (ISAF) in Afghanistan.
The majority of the around the clock, non-stop programming may come from Andernach, Germany, but every day, the morning show originates live from the local studio in Mazar-e-Sharif. Five German soldiers here provide music, entertainment, world news and reports involving ISAF operations in Afghanistan.
“Radio Andernach is very important for the moral of German troops,” said Capt. Andreas Buss, German Radio Andernach chief and native of Andernach, Germany. “Due to the radio program, they are well informed and have a very close link home. Another aspect is that Radio Andernach can be used as an instrument for military leadership. The commander can present his guidelines via radio.”
The motto of German Radio is “Soldaten senden fuer Soldaten,” which means soldiers sent for soldiers. This motto is very important to Buss.
“It’s a very entertaining job, you get to see everything this country does in Afghanistan,” said Buss. “But we are soldiers first and secondly journalists.”
German Staff Sgt. Thomas Langer, a personnel clerk and native of Sachsen, Germany, said he enjoys listening to German Radio Andernach.
“The music is good and modern and you can request songs and they play it on the radio,” said Langer. “If you hear songs [that remind you] of home, that is a good thing to have in Afghanistan.”