March 29, 2010
A Guiding Voice Amid the Ruins of a Capital City
By JEFFREY GETTLEMAN 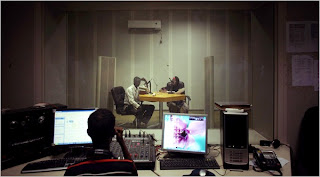 MOGADISHU, Somalia — A veiled female journalist (who also happens to be wearing a snug denim skirt) sits in a soundproof studio with a fuzzy microphone in front of her face. “Salaam Aleikum,” she says, greeting a man who has called in to the radio station. “Yes, hello,” he replies anxiously. “I want to talk about pirates. These guys aren’t being treated fairly.”
In a booth next door, news producers prepare the daily diet of mayhem and more: three bodies found in Bakaro market; President Sheik Sharif preaches reconciliation at a mosque; Islamic scholars speak out about the Shabab insurgent group cutting off hands; the livestock market is looking up and the price of goats, thank God, is steadily rising.
Good Morning. . .Mogadishu!
This is a typical day at Radio Mogadishu, the one and only relatively free radio station in south central Somalia where journalists can broadcast what they like — without worrying about being beheaded. The station’s 90-foot antennas, which rise above the rubble of the neighborhood, have literally become a beacon of freedom for reporters, editors, technicians and disc jockeys all across Somalia who have been chased away from their jobs by radical Islamist insurgents.
Whoever controls Mogadishu, controls Radio Mogadishu, and since the station opened in 1951 that has meant nattily dressed Italian administrators, a short-lived democratic government, a military dictator, various warlords and assorted thugs, Islamist sheiks and now a weak but internationally recognized transitional government that does not have a grip on the capital but is ensconced in the hilltop neighborhood where the station is.
Radio Mogadishu’s 100 or so employees are marked men and women, because the insurgents associate them with the government. The journalists eat and sleep here, rarely venturing out. Most get paid a few hundred dollars a month. Some, like the station’s senior political correspondent, Abdi Aziz Mahamoud Africa, strut around the compound in baggy jeans and Western-style jerseys that could get them killed in other parts of town.
A platoon of Ugandan soldiers, part of the African Union peacekeeping mission here, is hunkered down behind sandbags at the station’s gate, the business end of their rifles trained on the warren of shot-up streets and blasted-out homes outside. Few people even live here anymore. Somalia has become one of the most dangerous places in the world to practice journalism, with more than 20 journalists assassinated in the past four years. “We miss them,” Mr. Africa said about his fallen colleagues. He cracked an embarrassed smile when asked about his name. “It’s because I’m dark, really dark,” he said.
Mr. Africa used to work at one of the city’s other radio stations (the city has more than 10) but decided to move on after fighters with the Shabab dropped by and threatened to kill the reporters if they did not broadcast pro-Shabab news. Mr. Africa called the Shabab meddlers “secret editors” and now he carries a gun. “I tried to get the other journalists to buy pistols,” Mr. Africa remembered. “But nobody listened to me.” Another reporter, Musa Osman, said that his real home was only about a mile away. “But I haven’t seen my kids for months,” he said.
He drew his finger across his throat and laughed a sharp, bitter laugh when asked what would happen if he went home.
The digs here are hardly plush. Most of the journalists sleep on thin foam mattresses in bald concrete rooms. The station itself is a crumbling, bullet-scarred reflection of this entire nation, which has been essentially governmentless for nearly two decades.
One of the buildings on the compound is a heap of pulverized rubble with a blown-out ceiling. “Black Hawk Down,” one young journalist explained, almost proudly. The building was apparently bombed in 1993, when the station was run by Gen. Mohammed Farah Aideed, a notorious Somali warlord whose militiamen fought against American troops in a vicious street battle later immortalized by the book and film, “Black Hawk Down.”
Mr. Aideed’s mustachioed, almost goofy-looking visage still gazes from a wall, along with sepia-toned photographs of Somalia’s last dictator, Gen. Mohammed Siad Barre. Nearby is an old dog-eared timetable for Somali airlines titled, “The White Star Service.” The White Star has not flown for years.
In a city where relentless small-caliber gunfire has reduced just about every monument, library and place of note to a pile of sun-bleached concrete block, Radio Mogadishu may be one of the last surviving repositories of Somali history. In a shadowy back room, past ancient turntables and gutted speakers with wires shooting out, are miles and miles of reel-to-reel tapes stacked floor to ceiling in 10-foot-high racks. They are carefully labeled in fading ink: old speeches, cultural songs, patriotic songs, interviews with nomads and other mementos of a vanishing culture. Every week, some of the tapes are dusted off and played on a show called “Reminisces.” “This place is a cultural treasure, believe it or not,” said Mukhtar Ainashe, a presidential adviser.
The United Nations is trying to help the Somalis convert the vintage tapes to compact discs before humidity and time overtake them. The fledging Somali government is also pouring in resources, like a new transmitter that will expand coverage from a few miles to more than 60, because Radio Mogadishu is seen as a key piece of its hearts-and-minds strategy to pull the public over to the government’s side.
But the journalists here insist they are not merely public relations agents. They air the speeches of insurgent leaders, they say, and stories about government soldiers robbing citizens. “If the government does something bad,” Mr. Africa said. “We report it.”