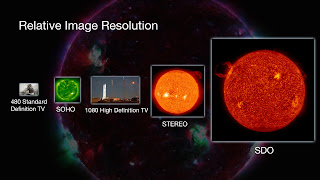 NASA's recently launched Solar Dynamics Observatory, or SDO, is returning early images that confirm an unprecedented new capability for scientists to better understand our sun’s dynamic processes. These solar activities affect everything on Earth.
Some of the images from the spacecraft show never-before-seen detail of material streaming outward and away from sunspots. Others show extreme close-ups of activity on the sun’s surface. The spacecraft also has made the first high-resolution measurements of solar flares in a broad range of extreme ultraviolet wavelengths.
"These initial images show a dynamic sun that I had never seen in more than 40 years of solar research,” said Richard Fisher, director of the Heliophysics Division at NASA Headquarters in Washington. "SDO will change our understanding of the sun and its processes, which affect our lives and society. This mission will have a huge impact on science, similar to the impact of the Hubble Space Telescope on modern astrophysics.”
Launched on Feb. 11, 2010, SDO is the most advanced spacecraft ever designed to study the sun. During its five-year mission, it will examine the sun's magnetic field and also provide a better understanding of the role the sun plays in Earth's atmospheric chemistry and climate. Since launch, engineers have been conducting testing and verification of the spacecraft’s components. Now fully operational, SDO will provide images with clarity 10 times better than high-definition television and will return more comprehensive science data faster than any other solar observing spacecraft.
SDO will determine how the sun's magnetic field is generated, structured and converted into violent solar events such as turbulent solar wind, solar flares and coronal mass ejections. These immense clouds of material, when directed toward Earth, can cause large magnetic storms in our planet’s magnetosphere and upper atmosphere.
SDO will provide critical data that will improve the ability to predict these space weather events. NASA's Goddard Space Flight Center in Greenbelt, Md., built, operates and manages the SDO spacecraft for the agency’s Science Mission Directorate in Washington.
“I’m so proud of our brilliant work force at Goddard, which is rewriting science textbooks once again.” said Sen. Barbara Mikulski, D-Md., chairwoman of the Commerce, Justice and Science Appropriations Subcommittee that funds NASA. “This time Goddard is shedding new light on our closest star, the sun, discovering new information about powerful solar flares that affect us here on Earth by damaging communication satellites and temporarily knocking out power grids. Better data means more accurate solar storm warnings.”
Space weather has been recognized as a cause of technological problems since the invention of the telegraph in the 19th century. These events produce disturbances in electromagnetic fields on Earth that can induce extreme currents in wires, disrupting power lines and causing widespread blackouts. These solar storms can interfere with communications between ground controllers, satellites and airplane pilots flying near Earth's poles. Radio noise from the storm also can disrupt cell phone service.
SDO will send 1.5 terabytes of data back to Earth each day, which is equivalent to a daily download of half a million songs onto an MP3 player. The observatory carries three state-of the-art instruments for conducting solar research.
The Helioseismic and Magnetic Imager maps solar magnetic fields and looks beneath the sun’s opaque surface. The experiment will decipher the physics of the sun’s activity, taking pictures in several very narrow bands of visible light. Scientists will be able to make ultrasound images of the sun and study active regions in a way similar to watching sand shift in a desert dune. The instrument’s principal investigator is Phil Scherrer of Stanford University. HMI was built by a collaboration of Stanford University and the Lockheed Martin Solar and Astrophysics Laboratory in Palo Alto, Calif.
The Atmospheric Imaging Assembly is a group of four telescopes designed to photograph the sun’s surface and atmosphere. The instrument covers 10 different wavelength bands, or colors, selected to reveal key aspects of solar activity. These types of images will show details never seen before by scientists. The principal investigator is Alan Title of the Lockheed Martin Solar and Astrophysics Laboratory, which built the instrument.
The Extreme Ultraviolet Variability Experiment measures fluctuations in the sun’s radiant emissions. These emissions have a direct and powerful effect on Earth’s upper atmosphere -- heating it, puffing it up, and breaking apart atoms and molecules. Researchers don’t know how fast the sun can vary at many of these wavelengths, so they expect to make discoveries about flare events. The principal investigator is Tom Woods of the Laboratory for Atmospheric and Space Physics at the University of Colorado, Boulder. LASP built the instrument.
"These amazing images, which show our dynamic sun in a new level of detail, are only the beginning of SDO's contribution to our understanding of the sun," said SDO Project Scientist Dean Pesnell of Goddard.
SDO is the first mission of NASA's Living with a Star Program, or LWS, and the crown jewel in a fleet of NASA missions that study our sun and space environment. The goal of LWS is to develop the scientific understanding necessary to address those aspects of the connected sun-Earth system that directly affect our lives and society.