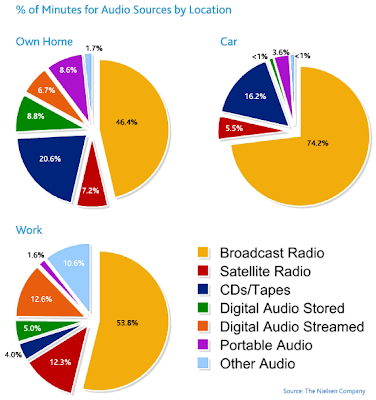 According to a Nielsen analysis of a media study conducted by the Council for Research Excellence, 77% of adults are reached by broadcast radio on a daily basis, second only to television at 95%. The study found that Web/Internet (excluding email) reached 64%, newspaper 35%, and magazines 27%.

And, in a deeper analysis of audio media titled "How U.S. Adults Use Radio and Other Forms of Audio," Nielsen found that:

While the recent emergence of portable audio devices like the iPod and other MP3 players was considered a threat to traditional forms of audio, this study's evidence suggests that the new technology has had a positive effect on radio consumption. Radio was found to have a higher reach (82%) among those who listen to portable audio devices, compared to the average reach for all audio consumers.
Jeff Haley, President and CEO of the Radio Advertising Bureau (RAB), concludes that "... this... observational study of today's consumer proves that the primary source of new music is the radio."
Another key takeaway from the reports is that broadcast radio is the dominant form of audio media at home, work, and in the car. Exposure to audio listening falls into four tiers in terms of level of usage among listeners: 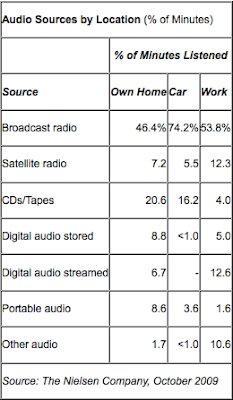 Other findings highlighted in the report include:

* Audio media exposure has the highest reach among those with higher levels of education and income
* Approximately 12% of study participants listened to MP3s and iPods for an average of 69 minutes per day, yet eight-in-ten of these individuals also listened to broadcast radio for an average of 97 minutes per day
* 90% of adults are exposed to some form of audio media on a daily basis, with broadcast radio having by far the largest share of listening time

* MP3 and iPod players averaged only 8 minutes of listening per day among the entire observed sample, with just under 90% of the sample not listening at all .
* Among listeners of portable audio devices (11.6%), the highest reach was among those aged 18 to 34 years (20.8%), singles (18.5%), and those who tend to be more technology-savvy (18.2%)
* Among those who also listened to portable audio devices such as MP3 players or iPods, broadcast radio had a daily reach of 81.6% reach and 97 minutes of average listening time among those who listen to radio Broadcast radio reaches those aged 18-34 at rates equivalent to the general adult population, with 79.2% of younger adults listening to broadcast radio for an average of 104 minutes a day among listeners. On average, individuals spend almost identical amounts of time during weekdays (454 minutes) as they do on weekends (458 minutes) using one of the five key media sources. And, among key "advertising-based" media platforms: