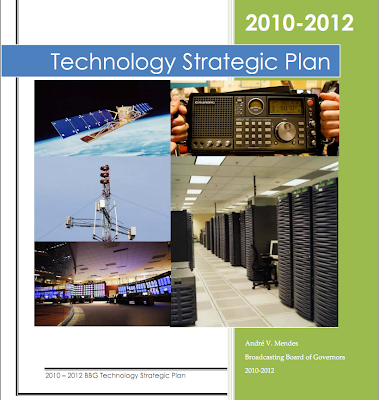 Voice of America operator plans "sunset" for shortwave radio broadcasts
Rob Beschizza
monday, Jun 6, 2011
The sun is setting on Voice of America's shortwave radio service, heard worldwide in dozens of languages for 70 years.
A strategic technology plan prepared by the Broadcasting Board of Governors (BBG), the federal agency responsible for Voice of America, Alhurra, Radio Free Asia and other international stations, concludes that it should end many shortwave broadcasts in favor of "more effective" media such as internet radio.
"The intrinsic high cost of operating high powered shortwave stations is constantly being weighed against the rapidly diminishing effectiveness of shortwave within a growing number of countries," the report states. "... the cost effectiveness of shortwave transmissions continues to wane and is expected to be circumscribed to a very small number of target countries in the relatively near future."
The "sun-setting strategy" proposed will reduce the number of stations owned by the BBG in favor of lease or sharing arrangements with—or outsourcing to—independent broadcasters. A "long-term analysis" of each country and language, and in-house research on shortwave's effectiveness in each, would determine which areas retain service.
The report, released following a Freedom of Information Act request by Government Attic, took six months to surface and it isn't clear to what extent its recommendations have been implemented. In February, however, Voice of America ceased shortwave broadcasts in China.
Its authors anticipate "political pressure" to continue widespread use of shortwave radio broadcasts. The BBG's own 2012 Budget Request (PDF) reported that it "must continue to broadcast via traditional technologies such as shortwave [because] the impact of not investing in infrastructure improvements will be the loss of capability and the loss of audience." It noted Burmese listeners as particularly dependent on shortwave service.
Titled 2010-2012 BBG Technology Strategic Plan, the report claims that BBG-funded broadcasts reach 101.9m people worldwide by radio, 81.5m by television, and 2.4m via internet. Internet broadcasts accounts for 1.4 percent of the unduplicated total audience.
The largest internet audiences are in Iraq, China and India, with large percentages of the population listening online in Oman, Kosovo and Morocco. The report notes that Voice of America's audience in Iran was about half that of the BBC World Service during recent electoral unrest there. A brief overview of anti-censorship software the BBG supports, such as Freegate and Tor, was also offered.
Much of report, however, is dedicated to describing the upgrades and management shake-ups required to address problems within the BBG's apparently shambolic I.T. department, whose failures are covered in detail and illustrated with photographs.
Throughout, the complexities of maintaining and staffing a worldwide, multilanguage broadcast media network weigh heavily on the report's author. But criticisms often fall upon particularly egregious lapses such as servers hidden under nests of network cabling, major software choices determined by the "dogmatic beliefs" of influential staffers, and redundant systems standing idle.
"The most serious situation presents itself at the heart of the BBG IT network," the report states. "Currently, the network is dependent on a single enterprise-class Cisco core router whose failure would severely cripple the entire agency for an extended period of time."
Adds the author: "Many other such situations exist ... such as servers equipped with dual power supplies but with both power cords plugged into the same electrical circuit."
While the engineering section is said to be well-functioning, disaster recovery plans rely on "the presence of key individuals." The department lacks "baseline operational discipline" and labors under "several historical and personality-related 'accommodations' designed to isolate certain individuals and maintain legacy reporting relationships."
Even the email system is outmoded, according to the report, which recommends platform consolidation, virtualization, systems colocation, cloud computing to cut the number of physical servers in use, "clear standards and expectations for interpersonal behavior," and adoption of MPEG-4 for broadcast and archive use, as part of a two-year plan to fix the problems while trimming costs.
The report was released after a FOIA request from Government Attic, which posted it in full at its archives early Monday morning. One paragraph of the report, concerning disaster recovery, was redacted.