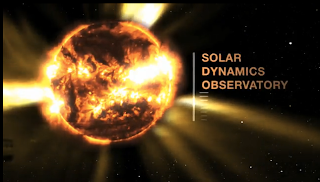 February 5, 2010: For some years now, an unorthodox idea has been gaining favor among astronomers. It contradicts old teachings and unsettles thoughtful observers, especially climatologists. "The sun," explains Lika Guhathakurta of NASA headquarters in Washington DC, "is a variable star." But it looks so constant... That's only a limitation of the human eye. Modern telescopes and spacecraft have penetrated the sun's blinding glare and found a maelstrom of unpredictable turmoil. Solar flares explode with the power of a billion atomic bombs. Clouds of magnetized gas (CMEs) big enough to swallow planets break away from the stellar surface. Holes in the sun's atmosphere spew million mile-per-hour gusts of solar wind. And those are the things that can happen in just one day.
Over longer periods of decades to centuries, solar activity waxes and wanes with a complex rhythm that researchers are still sorting out. The most famous "beat" is the 11-year sunspot cycle, described in many texts as a regular, clockwork process. In fact, it seems to have a mind of its own.
"It's not even 11 years," says Guhathakurtha. "The cycle ranges in length from 9 to 12 years. Some cycles are intense, with many sunspots and solar flares; others are mild, with relatively little solar activity. In the 17th century, during a period called the 'Maunder Minimum,' the cycle appeared to stop altogether for about 70 years and no one knows why."
There is no need to go so far back in time, however, to find an example of the cycle's unpredictability. Right now the sun is climbing out of a century-class solar minimum that almost no one anticipated.
"The depth of the solar minimum in 2008-2009 really took us by surprise," says sunspot expert David Hathaway of the Marshall Space Flight Center in Huntsville, Alabama. "It highlights how far we still have to go to successfully forecast solar activity."
That's a problem, because human society is increasingly vulnerable to solar flare ups. Modern people depend on a network of interconnected high-tech systems for the basics of daily life. Smart power grids, GPS navigation, air travel, financial services, emergency radio communications—they can all be knocked out by intense solar activity. According to a 2008 study by the National Academy of Sciences, a century-class solar storm could cause twenty times more economic damage than Hurricane Katrina.
(continua)