Paragraph 57, page 55, amended December 1, 1921 to read:
CLASS 2.--Limited commercial stations are not open to public service and are licensed for a specific commercial service or services defined in the license. Stations of this class must not transmit to or accept public messages from other stations. No rates are authorized. Licenses of this class are required for all transmitting radio stations used for broadcasting news, concerts, lectures, and such matter. A wave length of 360 meters [833 kilohertz] is authorized for such service, and a wave length of 485 meters [619 kilohertz] is authorized for broadcasting crop reports and weather forecasts, provided the use of such wave lengths does not interfere with ship to shore or ship to ship service.

In 1920, radio was a new phenomenon, and George Schubel, founder and publisher of the Ridgewood Times was enthralled with its potential. 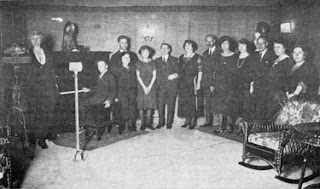 A significant event in the history of radio broadcasting took place on July 21, 1921, when RCA aired the Jack Dempsey-Georges Carpentier heavyweight prize fight live from Jersey City, New Jersey. It was estimated that 300,000 persons listened, including groups gathered around loudspeakers, as the number of radios owned by the public was limited.
In 1921, some of the more affluent businessmen in Ridgewood were taking vacations, travelling to and from Europe by steamer to visit their homeland in Germany. George Schubel was seriously considering doing so, but the publicity given to the Dempsey-Carpentier fight attracted his attention. Instead of going to Europe, he decided to investigate starting a radio broadcasting station in Ridgewood.
Schubel contacted an electrical contractor at Fresh Pond Road and Catalpa Avenue in Ridgewood and inquired as to what equipment would be needed, the cost and whether a capable engineer was available to operate the station.
F. William Boettcher, who resided on Irving Avenue, operated a licensed amateur radio station. He belonged to the Radio Traffic Association, of which one of the members worked for the New York Telephone Company as a service and repair man.
In those days, the telephone company provided their servicemen with a bicycle to go from job to job. One day, Boettcher met the telephone repairman pedaling his bicycle along Cornelia Street in Ridgewood. They stopped to chat, and Boettcher was told about George Schubel’s interest in operating a radio station and in engaging the services of a radio engineer.
Boettcher was acquainted with the electrical contractor and got in contact with him, and then George Schubel, who hired him as the design and installation engineer.
Schubel purchased equipment, which included a DeForest Radio Telephone Company 15-watt transmitter. There was a large flagpole on the roof at 816 Cypress Avenue, and a second pole was installed soon thereafter.
A T-type flat top transmitting antenna was suspended between the two poles. The Ridgewood Chamber of Commerce had their meeting room on the first floor of the building, and Schubel got permission to use the room as his broadcast studio.
Boettcher then acoustically treated the meeting room and installed microphones, which were connected to the transmitter on the roof.
A special motor-generated power supply was installed in the transmitter housing to energize the equipment.
In early 1922, Schubel applied to the United States Department of Commerce in Washington, D.C. for a broadcast license. Federal Inspector Emery Lee visited the facility at 816 Cypress Avenue and approved the installation.
The call letters WHN were assigned with instructions to broadcast on the 360 meter wavelength (which is a frequency of 833 kilocycles).
Radio transmissions are invisible electromagnetic waves that travel at a uniform rate of 300 million meters (about 186,000 miles) per second. “Wavelength” is the distance between the crests of the radio waves. “Frequency,” when expressed in kilocycles, is the thousands of wave crests per second. The newly licensed station WHN was one of 30 broadcast stations in the United States and the only one in Queens County.
The U.S. Department of Commerce requested that the 360-meter wavelength be used as they were of the opinion that it was the best, and all stations were required to transmit on this wavelength.
This was satisfactory, as long as the stations were geographically separated by a sufficient distance so that they would not “jam” (interfere with) each other’s signals. When WHN was granted a license, they were informed that they would have to share the operating time with station WJZ, located in Newark, New Jersey and owned by Westinghouse Electric and Manufacturing Company.
Joseph Stroehlein operated a large musical instrument store on Myrtle Avenue near Catalpa Avenue. He was hired by Boettcher to be the program director for station WHN. Stroehlein moved a grand piano and a player piano into the studio along with two RCA Victor “Victrola” windup 78 RPM record players.
In February, 1922, station WHN made its debut.