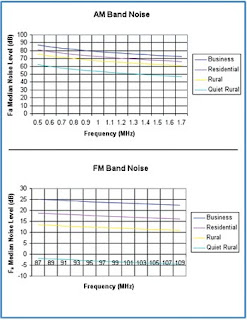 Six broad categories of man-made noise exist: power lines, light dimmers, microprocessors and high-speed digital circuity, touch-control lamps, broadband over power lines and co-channel or adjacent stations.
Arcing across power line equipment often causes power line noise. Such noise declines in amplitude with frequency and typically is more troublesome in rainy and windy conditions.
Power line noise affects AM and FM but is most often noticed on AM because the recognizable buzz is demodulated in an AM receiver more readily than on FM. Power line noise is carried and radiated by the high-tension lines, compounding the problem.
Light dimmers made for home use incorporate thyristor devices that switch the AC line voltage with a very fast rise time. Unless effective filtering is used, these fast rise times can cause ringing that creates interference primarily in the AM band. Again, the AC power distribution serves as the antenna for the noise. 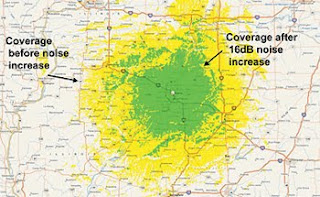 Huge advancements have been made in the speeds of computers, while at the same time there has been significant growth in the number of microprocessors and high-speed digital circuitry in so many other devices in regular household use. Since these devices include clocks ranging from a few kilohertz to hundreds of megahertz, even when effective shielding and filtering are used the cumulative effect raises the noise floor in the home, office and automotive environment.
The noise generated by high-speed logic has caused serious problems in AM and FM receiver design. Controllers used for receiver displays as well as decoding of digital radio modes create signals that are picked up by the adjacent receiver front-end circuitry, limiting the effective sensitivity of the receiver.
In the past few years, inexpensive touch-control lamps for the home have become available. These lamps may be switched on and off, or through a range of brightness levels, by touching a capacitive plate.
Touch lamps generally contain a free-running oscillator that changes frequency when the plate is touched. Unfortunately, these oscillators are also rich in harmonics and can radiate a wide frequency range.
In an effort to bring high-speed Internet access cost-effectively to a wide geographic area, some power companies have implemented technology in which high-frequency radio signals are carried on power lines. U.S. broadband over power line implementations have been limited to roughly 1.7 MHz to 80 MHz, according to the National Telecommunications and Information Administration, and would thus be limited to the spectrum between the AM and FM bands. However, this is not always the case internationally, and BPL is a significant source of noise to radio broadcasters.
Co-channel or adjacent stations are a source of man-made noise. The population of radio stations worldwide has multiplied several times in the past 20 years on both the AM and FM bands, as new services are authorized by governing bodies.
In the United States, in just the last decade, 2,000 more stations have gone on the air, according to the Radio World article “Number of Licensed Radio Stations Grows,” March 21, 2008. There are now a total of 14,253 AM and FM stations on the air, plus 851 LPFMs and 6,120 translators and boosters as of December 2008, according to the FCC, the latest information available.