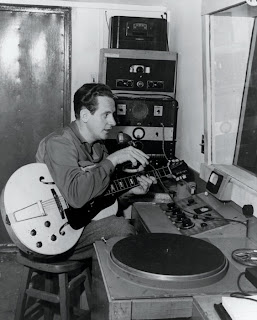 HOLLYWOOD, Calif., Aug. 13 -- EMI Music joins the rest of the world in mourning the legendary musician, inventor and innovator, Les Paul, who passed away this morning at the age of 94. Today, the flag atop the Capitol Records tower in Hollywood has been lowered to half-staff in remembrance of Paul, one of EMI Music's most legendary and innovative recording artists, who first signed with Capitol Records in 1948 and was instrumental in the development of both the Capitol label and Capitol Studios.
Born Lester William Polsfuss in Waukesha, Wisconsin on June 9, 1915, Les Paul was one of the foremost influences on 20th Century sound as one of America's most popular, influential, and accomplished electric guitarists, as well as an early innovator in the development of the solid body guitar. His groundbreaking design would become the template for Gibson's best-selling electric, the Les Paul model, introduced in 1952. Today, countless musical legends still consider Paul's iconic guitar unmatched in sound and prowess. Among Paul's most enduring contributions are those in the technological realm, including ingenious developments in multi-track recording, guitar effects, and the mechanics of sound in general.
Les Paul signed with Capitol Records in 1948. His Capitol recordings garnered him a string of hits, notably 1948's "Brazil," with its six multi-tracked guitar parts, "Vaya Con Dios," and 1951's million-sellers "Mockin' Bird Hill" and "How High the Moon."
1949 saw the birth of "The Les Paul Show" on radio, and by year's end Paul and his frequent musical collaborator, Mary Ford, had married. Between recordings and broadcasts, Paul found time to invent a synthesizer and an effects-generating machine he dubbed the "Les Paulverizer," a wacky contraption that is wittily depicted in Paul and Ford's classic CBS Radio-hosted banter as a beast-like appendage, heavily strapped to the back of its user. Since then, the technology of the "Les Paulverizer" has been put to use every day by producers and musicians from every genre, from classical to punk rock.
When Capitol Records' famous Vine Street building was being built in Hollywood, with its unique "stacked records" design, Paul joked that the idea of a round building was wholly impractical, because it lacked a corner in which to prop a broom. As the final touches were being put on Capitol's new studios, Paul visited and consulted on the design of the studios' now-legendary subterranean echo chambers.
Paul retreated from recording in the late 1970s, turning his focus to live performance, a weekly ritual he enjoyed at New York City's Iridium Jazz Club until his recent hospitalization. Over the years, other world-famous musicians often sat in for a song or two during Paul's two Monday night sets, including Paul McCartney, Tony Bennett and Keith Richards, and Paul also encouraged aspiring players who toted their guitars to his shows, selecting them from the audience to join him onstage for a song.
In 2005, celebrating his 90th birthday, Paul released Les Paul & Friends: American Made World Played with Capitol/EMI, featuring collaborations with a veritable who's who of the electric guitar, including dozens of illustrious fans like Keith Richards, Buddy Guy, Billy Gibbons, Jeff Beck, Eric Clapton, and Joe Perry. Les Paul won two Grammy Awards for tracks on the album, for Best Pop Instrumental Performance and Best Rock Instrumental Performance.
Les Paul and Mary Ford were inducted into the Grammy Hall of Fame in 1977, and Paul was honored with The Recording Academy's Trustees Award in 1983. In 2001, when he earned his fifth Grammy award for his technical achievements, Hillel Resner of Mix Online wrote, "If the music industry has a Ben Franklin, surely that man is Les Paul." In 1988, Paul was inducted into the Rock and Roll Hall of Fame. The Smithsonian Institution has honored Paul with the John Smithson Bicentennial Medal, and in 2008, the Rock and Roll Hall of Fame paid tribute to Paul with a week-long celebration of his life.
Les Paul is survived by his three sons Lester (Rus) G. Paul, Gene W. Paul and Robert (Bobby) R. Paul, his daughter Colleen Wess, son-in-law Gary Wess, long time friend Arlene Palmer, five grandchildren and five great grandchildren.
A private funeral service will be held in New York. A service in Waukesha, WI will be announced at a later date. Details will follow and will be announced for all services. Memorial tributes for the public will be announced at a future date.
The family asks that in lieu of flowers, donations be made to the Les Paul Foundation, 236 West 30th Street, 7th Floor, New York, New York 10001.