Una radio a manovella per fare chiarezza in Afghanistan

‘First with the truth’

U.S. soldiers in Afghanistan set up transmitters, hire local talent and hand out radios to Paktia residents to beat the Taliban at the news game

By James Warden, Stars and Stripes Mideast edition, Tuesday, May 5, 2009 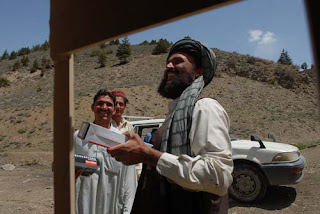