BBC Devon pubblica i risultati dei test DRM in AM 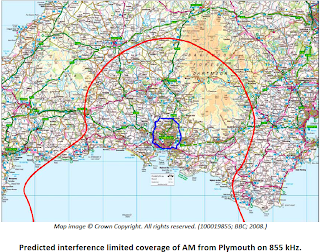 Hello. My name is Tom and I work for the part of the BBC which looks after our television and radio transmissions in the UK. For a bit more than two years, I was also looking after a project to do with digital broadcasting on medium-wave and as we've just published the final report for that, I've been asked to write a few words here to explain what we did and what we found out.
It might surprise you to know that we're still interested in technologies like medium-wave given everything else that's going on but there are good reasons for that. Whichever way you cut it, the BBC is still one of the world's largest medium-wave broadcasters and a considerable chunk of our audience still makes use of our transmissions. From an engineer's point of view, medium-wave is great because it's relatively simple and goes much further than, say, FM: it's not as blocked by trees and buildings and terrain as technologies which use higher frequencies. But it has its problems as well: it's mono, it's not very high quality, it can suffer from interference from domestic appliances. So, a decade or so ago, research engineers from around the world - including the BBC's team at Kingswood Warren - began development of a new transmission standard which would turn medium-wave digital: something which ended up being called digital radio mondiale, or DRM.
Our colleagues at the BBC World Service have been using DRM for a while now on some of their European medium-wave and short-wave transmissions but before April 2007, we in the UK-bit of the BBC (the "home" or "domestic" service) had never really had a chance to experiment with it. We'd certainly never tried running a DRM transmission as a service for an extended period of time to see what the listeners made of it.
In April 2007, we did just that. We took a frequency used by BBC Radio Devon in Plymouth, closed down the medium-wave service, and re-engineered the transmitter so that it could carry DRM. We then ran Radio Devon using this system - and over the course of the next year, we worked with a panel of listeners in Plymouth and west Devon (to whom we had given special DRM-capable radios) to understand how the technology worked for them and what their experience of it was.
The results were interesting. For the most part, the panel's reaction to DRM was positive. They enjoyed the generally improved audio quality and they took easily to their new radios. And for most of them, the reception was good; one or two glitches but normally ok.
This was borne out by our own measurements of the signal. We found that the area we were able to cover during the day was very much bigger than the area we could cover with the old AM signal that had been there previously.
But, on the downside, some of our panel experienced problems at night - and we saw these effects in our measurements as well. The problem will be familiar to many listeners to medium-wave: at night, changes in the atmosphere mean that signals from distant transmitters reach our shores more easily. On medium-wave, you might hear this as cross-talk: a foreign voice underneath what you're trying to listen to, or the occasional 'splat' of another transmission. The issue we came across with DRM is that this interference causes the radio to stop decoding the signal: sometimes only momentarily, sometimes for a while longer. So rather than listening through the interference, it's like all digital systems: you either get it (and so get it at a consistently high quality) or you don't get it at all.
So while most of the panel continued to listen without experiencing any problems, some of them found they were only served during the day and had patchy coverage at night. And of course this problem became worse as the hours of daylight shrunk during the autumn; so by winter, some were beginning to experience poor reception in the late afternoon.
This problem can be solved - but it would require us to re-plan our transmission network: either by moving the frequencies around so that we use ones that aren't quite so damaged by interference, or by building higher power transmitters, or by simply building more of them. (One of the nice things about DRM - which we also proved in the trial - is that you can run two transmitters on the same frequency without causing interference between them, so building more transmitters doesn't necessarily mean using more frequencies.)
DRM still has potential: indeed, considerable potential for international broadcasting where it remains of great interest to our colleagues at the BBC World Service and others, and it might have an application at home as well. But our trial has shown that the migration from analogue to digital at many of the frequencies which are currently allocated to the UK has its own set of challenges that would need to be addressed.
Anyway, there's much more in our final reports - because we worked so closely with the people at BBC Radio Devon, they're available over on their website. Have a read and see what you think.
(Tom Everest works within BBC Distribution)