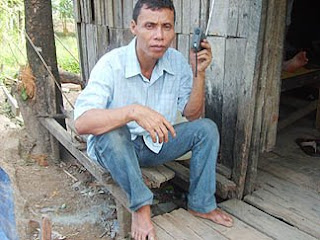 YANGON (UCAN) -- Hong Kong youths log onto the Internet, children in Tokyo use their mobile phones and many Delhi kids have scores of cable TV channels to entertain them.
But for the Kayin, or Karen, ethnic people in Myanmar, a cheap US$10 radio is their "hi-tech" link to communications and entertainment. Here you'll find many Kayin with "Made in China" radios tuned to Radio Veritas Asia's (RVA) Kayin service.
The RVA, based in Quezon City north of Manila and sponsored by the Federation of Asian Bishops' Conferences, has provided a Kayin-language service for over 25 years. Its Catholic programs have become a source of spiritual strength and information to thousands of Kayin Christians, most of whom are Protestant.
The programs include reflections on the Bible, meditations, family and youth issues, question and answer sessions on spirituality, sessions on the lives of the saints, local news and Kayin culture.
Anthony Htun Mya, 45, from Hkaungpu-Bawsi in Hpa-pun Township, Kayin State, who was on a visit to Yangon, is one such listener. He is a regular follower of Radio Veritas' shortwave early morning and evening services.
In his village, the programs are virtually the only window to the outside world, he said. There, all the Catholic and Baptist villagers regularly tune in to the service.
"Because of the lack of newspapers, magazines and novels, we have all come to understand the value of the service, especially since many Kayin don't understand the (main) Burmese language properly," he said. "It makes us especially happy to hear religious news broadcasts in the Kayin language."
Htun said he really enjoys listing to the Kayin songs which are relaxing and help him unwind after a tiring day at work. But homilies are his favorite.
Regular Kayin-language services are broadcast seven days a week from 6:30 a.m. to 7 a.m. and 6:30 p.m. to 7 p.m. Of the two Kayin languages, Pwo Kayin is broadcast only on Wednesdays and Saturdays, the rest are in Sagaw Kayin.
Mahn Paul, 50, from Myaungmya is a composer and in charge of recording at the Thoo-lay-phaw Kayin Studio at Sts. Peter and Paul Church in Yangon. He also contributes to programs. "I've been listening to the programs for 25 years," he said. "It's especially delightful to compose songs for the program and I will be trying my best to come up with more modern songs."
Such is the popularity of the service that loud speakers are placed at the Sts. Peter and Paul Bible School, so all those in the compound or in the vicinity can hear the broadcasts.
Plans are also afoot to provide a Kayin language support center at Sts. Peter and Paul Church where Kayin listeners can send requests and suggestions for the service. Internet and digital facilities will also be available when the center comes into operation.
Elizabeth Hla Hla Nwe 42, a listener from the village of Outsu, Twantay Township, said: "I have been listening to the RVA for more than 15 years and I love the programs on spirituality. Birthday song requests, homilies and the program on the lives of the saints are also my favorites."
However, the broadcasts serve other needs as well. She said she and fellow villagers also have also "learned more about other things such as health issues and the use of medicines, which is very important when you consider the scarcity of doctors and nurses in remote areas."
Retired Archbishop Gabriel Thohey Mahn Gaby, former archbishop of Yangon, established the Kayin radio service on April 1, 1982. At present, Bishop John Hsane Hgyi of Pathein and Bishop Raymond Saw Po Ray of Mawlamyine oversee the Kayin broadcasts.
RVA, which broadcasts in 15 languages across Asia, is the only continental Catholic shortwave station in the world. It celebrated 40 years of broadcasting in April.