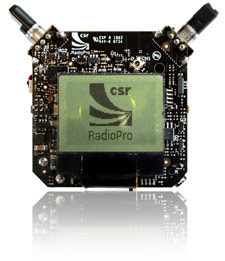 LONDON — Wireless chip specialist CSR (Cambridge, England) is readying a Wi-Fi internet radio reference design that it says has an electronics Bill of Materials of just $15 in volume and thus changes the economics of designing products for internet radio reception.
Dubbed the RadiPro, the design incorporates CSR's UniFi single-chip Wi-Fi technology, a multimedia applications processor that combines the company's proprietary Kalimba DSP and risc cores and a high quality 16-bit codec, all based on CSR's BlueCore-5 architecture.
According to Ronen Kenig, product marketing manager at CSR's Consumer Business Unit, products using the RadioPro will be available in shops next month.
He adds CSR believes that by 2009, 40 percent of MP3 and portable media players will offer Internet radio capabilities, as would half of all DAB and satellite radios and a third of home Hi-Fi systems. Other applications are likely to include iPod docking stations and set top boxes.
The low power design of RadioPro boasts up to 25 hours of active streaming time running on a 1500mAH battery. RadioPro provides wireless streaming of internet radio via Wi-Fi, without the need for a PC, and can support over 10,000 radio stations through a dedicated internet radio portal. CSR has teamed with specialist company vTuner to provide the portal with its designs, but this portal link can be exchanged if necessary.
The design also includes all the hardware drivers and streaming protocols needed, as well as MP3, WMA and RealAudio codec support at launch. Also included is over-the-air field upgradeability, allowing operators to fix bugs, add new software features including further codecs, and new services.
CSR's roadmap for the part suggests additional codecs, for instance ACC, will be available by the middle of next year, as well as FM receiver and Bluetooth capabilities, support for Asian fonts, and streaming from Digital Media Servers.
Figures published by RAJAR (Radio Joint Audience Research) show that almost a quarter of the U.K. population listened to radio via the internet in March 2007 alone. However, as a relatively new entrant in the home entertainment arena, the initial cost for specific internet radio products has so far come with a hefty price tag of no less than $200.
CSR says with its BOM of $15, ODMs would be able to bring internet radio products to consumers for much less, typically $60 to $70 for a complete product according to Kenig.