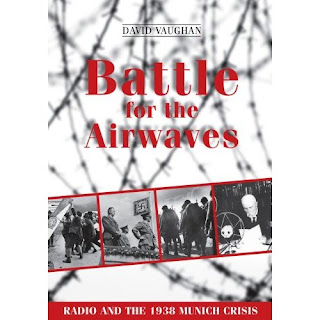 Battle for the Airwaves: radio and the 1938 Munich crisis

70 years ago, in September 1938, Europe was in the grip of a complex international diplomatic drama, known as the Munich crisis. It culminated in the fateful signing of the Munich Agreement on September 30, when the leaders of Britain, France and Italy agreed to Hitler’s territorial claims on Czechoslovakia in return for a peace that was to last just a year. A fascinating and gripping account of this crisis has been published this week, and I’m delighted to be able to talk about it with its author, my colleague at Radio Prague, David Vaughan:

Your book is called Battle for the Airwaves and it isn’t simply a history or description of the Munich crisis. Its subtitle is ‘Radio and the 1938 Munich Crisis’. What prompted you to write this, I think your first book?

“Yes, it is my first book. I’ve been working in radio for the best part of the last 20 years, and so radio is really my world. I became very interested in this particular aspect of the history of the events leading up to the Second World War from my time spent in the archives of Czech Radio, where I realized that there were a lot of archive recordings from that time. These are not just Czech, but also in various other languages, and also not just from Radiojournal, which was the predecessor of Czechoslovak Radio, but from many different radio stations. That led me to start exploring in other archives, and I discovered that it was possible to put together a mosaic of what happened in the run-up to the Munich Agreement as it was played out on the airwaves – and that of course brings up all sorts of questions about how radio was used at the time.”
Your book is printed in both English and Czech. It’s bilingual in that respect. It is also multilingual because it comes with a CD with many of the recordings which you just mentioned – in German, Czech, Slovak and of course English. It was clear to me from reading your book just how powerful a propaganda tool radio could be.

“It really is very striking, and this is why I wrote the book. I realized that the Munich crisis came just at a time when radio was entering maturity, and that suddenly radio was a medium that you couldn’t ignore. Nazi Germany was very aware of the potential of radio from early on, because Goebbels was a brilliant manipulator of public opinion. The Germans started from the moment that Hitler came to power in 1933 to try to influence public opinion in the Sudetenland - in the Czechoslovak borderlands, where the majority were German speakers. They tried to turn them against Czechoslovakia and they did this very effectively. The Czechs and Slovaks really underestimated the power of this propaganda.
“The CD includes an extract from one of Hitler’s speeches from the height of the crisis, on September 26 1938, just a few days before the Munich Agreement was signed. Here Hitler really is barking – in a terrifying way – with a crowd of 15,000 behind him. And it is interesting that this particular speech was broadcast not just to Germany but was rebroadcast all around the world by many different stations. So you can just imagine the impact on people somewhere in the American Mid-West, for example.”

One point that is made repeatedly in your book is just how relatively new but how powerful and widespread radio was.

“By that time in Germany 75% of households already had a radio. In the United States and in Britain it was similar, in Czechoslovakia the figure was slightly lower, but everybody had access to radio one way or another, and so it was everywhere. Most people hadn’t really thought much about the logical consequences of that, to what extent it made events immediate. These days we hear a lot of talk about globalization or the shrinking world, but it really began then rather than today, because that was the moment when for the first time a politician would be saying something at one end of the world and the listeners would be hearing it at the other end of the world – with immediate impact.”

I think this raises the question that you also raise in your book about the responsibilities of the journalist, because one thing that’s shown in your history is that, for example, American radio was much more probing and effective than the BBC.

“The BBC was in a difficult position, because it was a public service broadcaster – in the sense that we know them today – and therefore it did have a degree of independence from the state, but at the same time the complex relations between public funded organizations and governments weren’t really fully defined. So what you see in the BBC was a great deal of pressure from successive governments in the 1930s - the so-called ‘national governments’ in Britain - and Neville Chamberlain himself, trying to influence what the BBC was broadcasting. And unfortunately Chamberlain was an extremely astute media figure, he knew how to use the media and he did succeed in gaining more or less absolute control over what the BBC was broadcasting.”

Yes, his trips to Germany as you describe them were very stage-managed, and he certainly knew how to manipulate the press. I think you can contrast – with horror – the sombre feeling in Czechoslovakia with the way in which Chamberlain’s ‘jaunts’ to see Mr Hitler were reported by the BBC.

“Yes, I can quote from a BBC report, as Chamberlain is leaving Heston Aerodrome, just west of London, heading off to Munich to sign the Munich Agreement. By that time everybody knows that he has the deal pretty much sewn up, and the presenter’s town is almost euphoric:

Mr Chamberlain is posing and waving his hat with the great air of nonchalance and gaiety, which he adopted once before on the aeroplane, and which I believe he adopted yesterday when he said ‘It’s alright now’ to people in Downing Street. He doesn’t mind in the least being importuned frequently by the photographers, who shout ‘Mr Chamberlain, Mr Chamberlain, Mr Chamberlain,’ and he beams all over his face, turns back to the Cabinet and says, ‘Oh, I can’t stand any more.’ ‘Nonchalance and gaiety’. That is a mood very different from the mood that existed in Czechoslovakia.

“I think the most moving recording from Czechoslovakia during the crisis is the Justice Minister, Ivan Dérer. On the CD I include a recording that was broadcast at just about the same time as Chamberlain was returning from Munich. You can hear that Dérer is a broken man, that he has seen his country torn apart.
We faced a choice. Either war, a heroic struggle of our armies, but a war we could only lose, a terrible war, which would have ended, not just with the destruction of our valiant soldiers, but with the total annihilation of our nation, with the murder and violation of our women and children, or to accept what the European powers dictated to us in Munich.

You point out in the book that there was a sad echo thirty years later, when Dubček’s voice broke as he addressed the nation after the Soviet invasion.

“It’s the worst thing that can happen to a nation, I think, to have its history imposed upon it, without its citizens having any opportunity to influence it.”
You also raise a lot of very important and interesting questions about the ethics of journalism and the responsibility that individual journalists have – and not just public institutions like the BBC, but individuals themselves. One hero – almost - in this respect in your book is a journalist called Jonathan Griffin. He was an English journalist working in Prague at the time. I’d like to quote from a broadcast that he made to his compatriots. It’s very sobering to compare this with the information that people were receiving from official organs.

Why did the same event, the four-power agreement in Munich, produce opposite effects in the two peoples – for you jubilation, for the people here profound misery?

Because for the moment you have peace, but you have got it, for the moment, on the cheap, at others’ expense. For the moment you have paid for it nothing noticeable except the frightful responsibility of which some of you may be aware. Later on you will find that you have mortgaged the security of Great Britain and her security as a great power, and that by allowing your government to violate solemn pledges and ride roughshod over international justice and morality, you have let loose over Europe an anarchy that may well make the peace that you have so dearly bought uneasy and short.
“That was one of several very moving broadcasts by Jonathan Griffin, who, incidentally, was broadcasting on Czechoslovak Radio – Radiojournal – because his comments would have been far too critical for the BBC. He is one of a good number of journalists during that period, who recognized what was really happening and saw the dangers. I could name several: there was Milena Jesenská, a very well-known Czech journalist, there were a number of American journalists, like Bill Shirer and Ed Murrow, who later went on to become household names in the United States, who really did see what was going on, and I think that, taking the example of someone like Ed Murrow, who was broadcasting to the United States from Prague and other European cities, and Bill Shirer, informing Americans about what was going on, I don’t think it’s pure coincidence that Americans by the time of the Second World War by and large did understand that this was not a distant conflict. I think that radio really had brought what was going on in Europe home to people in America, and they understood by the time the United States entered the Second World War why it was important and why it was also their conflict.”