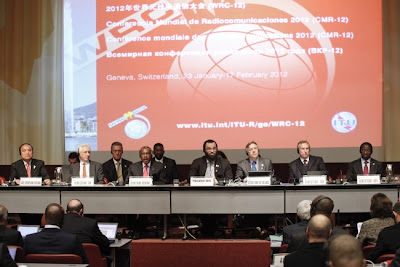 Key WRC-12 highlights:
Spectrum for International Mobile Telecommunications (IMT)
In addition to the use of the 790-862 MHz in Regions 1 and 3, WRC-12 considered further spectrum allocations to the mobile service, including International Mobile Telecommunications (IMT) to facilitate the development of terrestrial mobile broadband applications in the frequency band 694 – 790 MHz. This issue has been placed on the WRC-15 Agenda together with the need to consider additional spectrum allocations for the mobile service.
Increase efficiency in the use of the spectrum/orbit resource
In addition to the clarification of the notion of bringing into use of satellite network frequency assignments (satellite deployed and maintained at the notified orbital position for a continuous period of ninety days), WRC-12 also mandated the ITU Radiocommunication Bureau to initiate enquiries to administrations to provide information on the movement of satellites. Improved due diligence information, including more detail information on the identity of the spacecraft used for the operation of the frequency assignments was also agreed to foster the long term access and development of the Broadcasting Satellite Service (BSS) in the 21-4-22 GHz band in Regions 1 and 3. WRC-12 improved the satellite coordination by reducing the coordination arc in parts of the most congested spectrum and agreed to look into the possibility of further reductions.
Early warning, disaster mitigation and relief operations
With reference to emergency telecommunications, WRC-12 addressed the application of new technologies, such as IMT and intelligent transport systems (ITS) to support or supplement advanced public protection and disaster relief applications.
WRC-12 instructed ITU-R to continue studying aspects of radiocommunications and ICT that are relevant to early warning, disaster mitigation and relief operations and encouraged administrations to consider using identified frequency bands when undertaking their national planning for the purposes of achieving regionally harmonized frequency bands or ranges for advanced public protection and disaster relief solutions.
Earth observation’s societal and economic value recognized
WRC-12 focused on “The importance of Earth observation radiocommunication applications” in collecting and exchanging Earth observation data to maintain and improve the accuracy of weather forecasts, which contribute to the protection of life and preservation of property around the world. The Conference reaffirmed that Earth observation applications have considerable societal and economic value and urged administrations to protect the Earth observation systems in the related frequency bands.
Meteorological-satellite service gets more bandwidth
Non-geostationary satellites are an important part of the space-based Global Observing System and WRC-12 allocated additional spectrum to the meteorological-satellite service.
Satellite remote passive sensing
WRC-12 updated spectrum use aimed at the future of Earth observation applications with the development of passive sensors flying on meteorological and environmental satellites to monitor water vapour and oxygen spectral lines, which are needed for ice cloud and precipitation measurements and for storm monitoring and climate studies.
Oceanographic radars get support
WRC-12 adopted the relevant protection levels for interference caused by oceanographic radars. These radars operate using ground-waves that propagate over the sea to measure coastal sea surface conditions in support of environmental, oceanographic, meteorological, climatological, maritime and disaster mitigation operations and for the surveillance of coastal pollution, fisheries management, search and rescue, beach erosion, and maritime navigation.
Maritime services
Maritime communication requirements to support safety systems for ships and ports
WRC-12 addressed maritime communication requirements to support safety systems for ships and port operations. The conference included new provisions in the Radio Regulations to improve satellite detection of automatic information systems using VHF channels.
Transmitting frequencies in the VHF maritime mobile band
The conference also considered the use of new technologies in the maritime service needed to the “Table of transmitting frequencies in the VHF maritime mobile band”, which defines the channel numbering for maritime VHF communications based on 25 kHz channel spacing as well as where digital technologies could be deployed.
Aeronautical services
WRC-12 decided that necessary spectrum would be available for the introduction of applications and concepts in air traffic management that can support data links carrying safety-critical aviation information. These systems will enhance aeronautical communications capability and – in conjunction with more precise navigational capabilities – allow flight routing to be more efficient, resulting in fewer delays, shorter flight times on average, lower fuel costs and reduced CO² emissions. ITU-R will continue to study any compatibility issues between the broadcasting service and aeronautical mobile (route) service in the band 108–117.975 MHz that may arise from the introduction of digital sound broadcasting systems.
Aviation safety
The growth in the aviation industry calls for expanded capacity of mobile communication links that can operate over the horizon. WRC-12 decided that notifying administrations of mobile-satellite service networks shall accommodate the spectrum needed for distress, urgency and safety communications of the global maritime distress and safety system (GMDSS) and for the aeronautical mobile-satellite (route) service communications.
Aeronautical mobile (route) service
Aeronautical mobile (route) service systems are critical for various air traffic and flight safety communications. Some of the communication systems, such as traffic information, automatic dependent surveillance-broadcast, and flight information provide easily accessible air traffic information to multiple air traffic managers at the same time, allowing for more efficient use of airspace. The allocation of the frequency band 960−1164 MHz to the aeronautical mobile (route) service is intended to support the introduction of applications and concepts in air traffic management which are data intensive and which could support data links that carry safety critical aeronautical data.
Aeronautical mobile to protect other primary services in 37−38 GHz band
A number of countries are deploying space research service earth station receivers in the band 37−38 GHz to support manned near-Earth missions and deep-space missions. WRC-12 decided to exclude the aeronautical component of this mobile service allocation to ensure proper protection of existing and planned space research and mobile services.
Aerospace surveillance
WRC-12 addressed the lack of spectrum available for aerospace surveillance and tracking the launch and manoeuvring of spacecraft and provided an additional allocation in the frequency band 154−156 MHz to the radiolocation service in some countries.