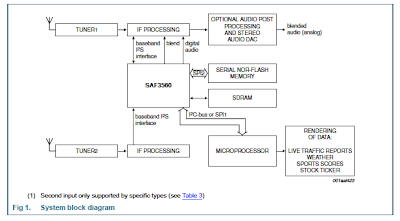 NXP Semiconductors today announced the availability of the SAF356x series, a flexible digital radio co-processor for car entertainment systems supporting DAB, DAB+ and T-DMB reception, as well as HD Radio. All standards are supported for both single- and dual-tuner applications. The SAF356x is the market’s first multi-standard baseband processor for digital terrestrial radio systems, with software that can be modified to support additional features in the future, including standards such as DRM or DRM+. [il corsivo è mio]
As a multi-standard processor which can replace multiple ICs used in car entertainment systems today allowing future-proof design and software upgrade flexibility, the NXP SAF356x enables car OEMs and Tier One suppliers to reduce their total cost of ownership for digital reception systems.
“The SAF356x has impressed us with its high versatility - its support of HD Radio and various DAB standards, its scalability from single- to dual-tuner applications, and additional features such as timeshift and DAB-FM blending,” said Michael Görtler, development manager at Fujitsu-Ten Europe GmbH. “This means we only have to invest in one hardware platform and still have the flexibility we need to fulfill the different demands of our many customers. What NXP offers as a package is also unique in the market, as the company is able to support not only the chip, but the complete application including its own DAB software.”
The SAF356x is a digital radio processor that demodulates and processes digital terrestrial radio signals and outputs the decoded audio and data. For HD Radio, it uses the AM/FM signals from NXP's leading radio/audio DSPs such as SAF7741 or its newest RFCMOS-based digital one-chip TEF663x. As the leading baseband processor for HD radio in cars, the SAF356x series makes it easy for customers to also build DAB systems based on the same hardware, with the addition of a DAB tuner module and application of new automotive-grade NXP software for DAB, DAB+ and T-DMB for single- and dual-tuner applications with one baseband processor.
“We're helping our customers lower the cost of ownership for digital radio by offering an innovative software defined radio solution for multiple standards. This approach also enables customers to benefit from our continuous innovation adding features such as seamless blending of DAB and FM signals, and unique algorithms to increase the reception area,” said Sebastian Schreuder, product marketing manager, NXP Semiconductors. “We will also be ready to support additional standards in emerging markets like DRM in India and Russia.”
Major benefits of terrestrial radio processor systems using the SAF356x: