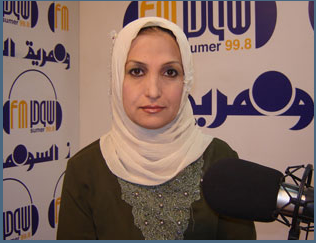 Inside a spacious studio with purple and yellow walls, Hana Abdulkadhim, a well-known Iraqi radio host, is preparing to take her first call of the day. A few minutes into Good Afternoon with Hana, the switchboard is already flooded with listeners eager to chime in on the day's topic. "This afternoon we're talking about circumstances in your life that caused you to lose something or someone you love," Hana says. "Were you able to overcome the situation, or were you defeated?"
A woman named Samma is on the line. "I lost my closest friend when she left our neighborhood," Samma says. Hana asks if her friend was forced to flee. Samma says yes. "Before, we had lots of time together. But now it's too far to reach her. We talk on the phone but it's not the same," she explains. "The circumstances defeated us." Hana tells her caller not to give up on the friendship. "I'm going to play a song for you, sweetheart," she says.
This is Sumer FM, Iraq's most popular independent radio station. It broadcasts from a state-of-the-art, brightly decorated studio in Baghdad's Karrada neighborhood, and its signal reaches every corner of the country. "It doesn't look like Iraq in here, does it?" the station's manager, Ammar Naji, says with a smile.
In a city overwhelmed by the complexities and uncertainties of war, Sumer FM is one thing its listeners can count on. Launched by a Lebanese businessman in November 2004, the station has stayed on the air every day since, even through Baghdad's most violent months.
A year ago, it was so dangerous here that many Iraqis were afraid to even leave their homes, and the cost of living in Baghdad has skyrocketed since the 2003 U.S.-led invasion. But staying in and listening to the radio has remained safe and cheap.
Even when the electricity is out, as it still is for large portions of the day here, the radios stay on. "No matter what's going on, we can give people something to enjoy, something to take their minds off everything else," says Jaffar al-Zubaidi, Sumer's program director. "And we don't take money from any parties. We are for all Iraqis," regardless of politics, ethnicity, religion or sect.
Named for one of the earliest known civilizations in the world, Sumer employs 14 people, half of them on-air talent. All of its revenue comes from advertisement sales. About half the time the station plays popular Arab and Iraqi music. The rest of its programming is filled with news, variety shows and talk.
Most of the station's discussion topics come from listeners. The goal is to give Iraqis a venue to vent their frustrations, al-Zubaidi says. The U.S. occupation, the constant power outages, the violence, the traffic jams and the long lines at security checkpoints are among the topics that draw the most callers, he says. "We let people talk about their suffering so they don't feel like they are the only ones," al-Zubaidi says. "And we try to stop the suffering, too, by exposing the issues."
Recently a listener called to complain about how the government suddenly stopped paying his pension. "We heard that same problem from many callers, so we made it the topic one day," al-Zubaidi explains. "And we invited (an official from) the pension directory to come on the show and hear the suffering."
Hani Haroon, a 29-year-old unemployed Baghdad resident, started listening to Sumer FM three years ago. "It is different from other stations," Haroon says. "They talk about the real issues that Iraqis care about. We need that. It gives people hope." Haroon calls the station often, but gets through only once in a while. "It's hard because so many people want to be heard," he said. Sumer takes about 11,000 listener phone calls each month.

Al-Rashid radio was shut down because its programming was aimed at "sowing sedition and fueling tension" between Kurds and Arabs in the city, said Ismael Gouran, a Kurdish member of the local provincial council. The radio is linked to a Sunni Arab lawmaker, Osama al-Nujeifi, who is known for his fiery statements accusing the Kurds of working to annex Mosul to the three-province Kurdish self-ruled region of northern Iraq. "Today's measure is to silence patriotic voices and to please Kurdistan officials who want to get rid of any competitors in the coming provincial elections," said al-Nujeifi, who is a member of the secular bloc in parliament headed by former Iraqi Prime Minister Ayad Allawi.
Al-Nujeifi said the station, which went on the air three months ago, had begun broadcasting programs supporting a Sunni Arab political group that plans to compete against the Kurds in next year's provincial elections.
The ruling council of Ninevah province, which includes Mosul, is controlled by Kurds because many Sunni Arabs boycotted the last regional elections in January 2005. That allowed the Kurds to win a big share of power in areas where they do not form a majority.
The Baghdad-based independent Journalistic Freedoms Observatory condemned the action against the station and called on the Iraqi government to allow Al-Rashid back on the air. Mosul, 225 miles (360 kilometers) northwest of Baghdad, is an ethically mixed city where al-Qaida and other Sunni insurgent groups still operate. U.S. commanders believe the insurgents feed off the undercurrent of tension between Arabs and Kurds, including Kurdish units of the Iraqi army that have been sent to the city to fight the extremists.