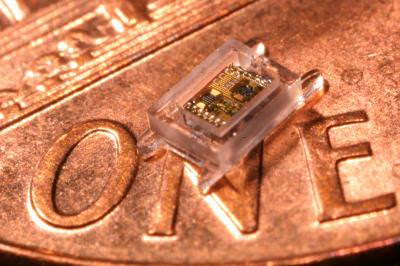 Toward computers that fit on a pen tip: New technologies usher in the millimeter-scale computing era
ANN ARBOR, Mich.---A prototype implantable eye pressure monitor for glaucoma patients is believed to contain the first complete millimeter-scale computing system.
And a compact radio that needs no tuning to find the right frequency could be a key enabler to organizing millimeter-scale systems into wireless sensor networks. These networks could one day track pollution, monitor structural integrity, perform surveillance, or make virtually any object smart and trackable.
Both developments at the University of Michigan are significant milestones in the march toward millimeter-scale computing, believed to be the next electronics frontier.
Researchers present papers on each today at the International Solid-State Circuits Conference (ISSCC) in San Francisco. The work is being led by three faculty members in the U-M Department of Electrical Engineering and Computer Science: professors Dennis Sylvester and David Blaauw, and assistant professor David Wentzloff.
Bell's Law and the promise of pervasive computing
Nearly invisible millimeter-scale systems could enable ubiquitous computing, and the researchers say that's the future of the industry. They point to Bell's Law, a corollary to Moore's Law. (Moore's says that the number of transistors on an integrated circuit doubles every two years, roughly doubling processing power.)
Bell's Law says there's a new class of smaller, cheaper computers about every decade. With each new class, the volume shrinks by two orders of magnitude and the number of systems per person increases. The law has held from 1960s' mainframes through the '80s' personal computers, the '90s' notebooks and the new millennium's smart phones. "When you get smaller than hand-held devices, you turn to these monitoring devices," Blaauw said. "The next big challenge is to achieve
millimeter-scale systems, which have a host of new applications for monitoring our bodies, our environment and our buildings. Because they're so small, you could manufacture hundreds of thousands on one wafer. There could be 10s to 100s of them per person and it's this per capita increase that fuels the semiconductor industry's growth."
The first complete millimeter-scale system
Blaauw and Sylvester's new system is targeted toward medical applications. The work they present at ISSCC focuses on a pressure monitor designed to be implanted in the eye to conveniently and continuously track the progress of glaucoma, a potentially blinding disease. (The device is expected to be commercially available several years from now.)
In a package that's just over 1 cubic millimeter, the system fits an ultra low-power microprocessor, a pressure sensor, memory, a thin-film battery, a solar cell and a wireless radio with an antenna that can transmit data to an external reader device that would be held near the eye. "This is the first true millimeter-scale complete computing system," Sylvester said. "Our work is unique in the sense that we're thinking about complete systems in which all the components are low-power and fit on the chip. We can collect data, store it and transmit it. The applications for
systems of this size are endless."
The processor in the eye pressure monitor is the third generation of the researchers' Phoenix chip, which uses a unique power gating architecture and an extreme sleep mode to achieve ultra-low power consumption. The newest system wakes every 15 minutes to take measurements and consumes an average of 5.3 nanowatts. To keep the battery charged, it requires exposure to 10 hours of indoor light each day or 1.5 hours of sunlight. It can store up to a week's worth of information. While this system is miniscule and complete, its radio doesn't equip it to talk to other devices like it. That's an important feature for any system targeted toward wireless sensor networks.
A unique compact radio to enable wireless sensor networks 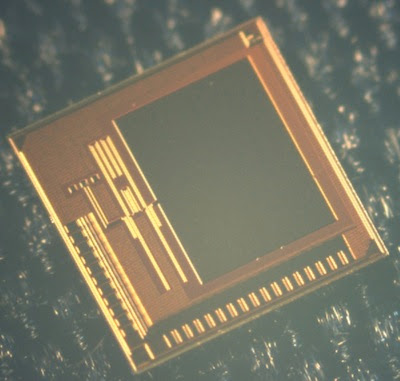 Wentzloff and doctoral student Kuo-Ken Huang have taken a step toward enabling such node-to-node communication. They've developed a consolidated radio with an on-chip antenna that doesn't need the bulky external crystal that engineers rely on today when two isolated devices need to talk to each other. The crystal reference keeps time and selects a radio frequency band. Integrating the antenna and eliminating this crystal significantly shrinks the radio system. Wentzloff's is less than 1 cubic millimeter in size.
He and Huang's key innovation is to engineer the new antenna to keep time on its own and serve as its own reference. By integrating the antenna through an advanced CMOS process, they can precisely control its shape and size and therefore how it oscillates in response to electrical signals.
"Antennas have a natural resonant frequency for electrical signals that is defined by their geometry, much like a pure audio tone on a tuning fork," Wentzloff said. "By designing a circuit to monitor the signal on the antenna and measure how close it is to the antenna's natural resonance, we can lock the transmitted signal to the antenna's resonant frequency."
"This is the first integrated antenna that also serves as its own reference. The radio on our chip doesn't need external tuning. Once you deploy a network of these, they'll automatically align at the same frequency." The researchers are now working on lowering the radio's power consumption so that it's compatible with millimeter-scale batteries.
Greg Chen, a doctoral student in the Department of Electrical Engineering and Computer Science, presents "A Cubic-Millimeter Energy-Autonomous Wireless Intraocular Pressure Monitor." The researchers are collaborating with Ken Wise, the William Gould Dow Distinguished University Professor of Electrical Engineering and Computer Science on the packaging of the sensor, and with Paul Lichter, chair of the Department of Ophthalmology and Visual Sciences at the U-M Medical School, for the implantation studies. Huang presents "A 60GHz Antenna-Referenced Frequency-Locked Loop in 0.13μm CMOS for Wireless Sensor Networks." This research is funded by the National Science Foundation. The university is pursuing patent protection for the intellectual property, and is seeking commercialization partners to help bring the technology to market.