On a wind-swept field northeast of Fort Collins, a compound of computers, radios and 400-foot antennas — manned by a handful of dedicated engineers — transmits the precise time to everything from the stock market to traffic signals.
By Rebecca Boyle 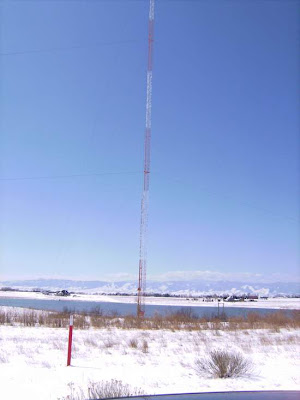 Quick — look at your cell phone, or glance your watch. What time is it right now? Oh, really? How can you be so sure?
That timepiece has to base its claims on something. When you set it, you told your microwave or your watch what time it was. You got that time from a different clock somewhere else. Meanwhile, a little computer or a piece of quartz has been keeping track for you, but what does it actually track? What is a minute, anyway? What’s a second?
At some point, somebody had to decide what those things mean. And somebody has to keep an eye on that definition so seconds don’t get too short or too long, messing up everything from GPS satellites to the stock market to your paycheck. (Did you really work eight hours yesterday? According to whose clock?)
You can thank a bunch of radio engineers in Fort Collins for helping keep all that straight. Four engineers in a compound northeast of the city keep watch, as it were, over the official atomic clock, and therefore the official time, of the United States.
The antennas at radio stations WWV and WWVB broadcast radio waves that synchronize everything from the stock market to traffic lights to your alarm clock. WWV broadcasts a signal you can hear; WWVB broadcasts a signal only your radio-controlled clock will recognize. “Your computer clock has a crystal — it has the ability to keep your time,” said Douglas Sutton, an engineer with the National Institute of Standards and Technology. But, he pointed out, it has its limitations. Eventually, the clock will be fast or slow, and you’ll have to correct it. “Say, in one week, you lose a second,” Sutton said. “Well, it’s our job to make sure you can correct that back to the proper time, because you’re referencing the standard.”
The windswept home of the nation’s timekeepers — where that standard is maintained — seems like any other rural site, complete with antelope tracks through the snow. But that’s before you see the copper-lined doors, the flickering, unplugged fluorescent lights powered by ambient energy, and the massive antenna towers.
Before the proliferation of radio-controlled clocks — there are between 3 or 4 million such clocks in the U.S. — government agencies were the atomic clock’s main users. Civilian use started in the early 1990s, and now, radio-controlled clocks (commonly but inaccurately called “atomic”) are widely available, often for a few dollars. But they wouldn’t work — whether in Hilton Head, S.C. ,or Walla Walla, Wash. — without the radio towers based in Fort Collins.

***
The National Institute of Standards and Technology, formerly known as the National Bureau of Standards, keeps track of a lot of official standards — the pound, the ounce, the cup, the inch, and, of course, the second.
Though the main time-standard-setting atomic clock, NIST-F1, is in Boulder, the Fort Collins facility has four of its own Hewlett-Packard cesium clocks that synchronize to the main system.
The antennas that broadcast the time to clocks around the country are in a remote location, off Colo. 1 in eastern Larimer County. That was partly out of necessity; when they were built in 1962, the area was even less populated than it is now. “It would be hard to have this site in the middle of Boulder,” Sutton said.
The site was also chosen for its electrical properties. The ground chemistry, which includes several metals that are found with the uranium that lies a few miles east, allows for good conductivity; the chemical make-up and the high groundwater level helps the radio waves travel farther.
The NIST site encompasses 340 acres and is surrounded by private land. It’s not like living under power lines, but living next door to the NIST antennas has its own complications. “People will call us from Wellington and say, ‘My home entertainment system announces the time every minute,’” Sutton said. At least they can accurately program their DVD players.
Still, Sutton said it’s good that not too many people live around the antennas. There is plenty of wildlife, however. Partly because of the flora and fauna, the facility resembles a summer camp for circuit engineers, or even a survivalist compound.
In the main building, the engineers have a break room and kitchen, and message boards for notes and sketches. Last week, the chalkboard was full of intricate server schematics and a reminder to spray the salt cedars this spring. The rooms containing radio signal generators are full of stacked water bottles, which add extra mass to keep things cool.
The facility used to employ dozens of people, but funding cuts have reduced the staff down to Sutton, Matt Deutch, Glenn Nelson and Bill Yates. They all wear many hats — they’re electrical engineers, plow drivers, firefighters who conduct controlled burns, tower-climbers who shimmy up 400 feet to change light bulbs, and all-around renaissance men. Sutton has been at NIST for 14 years. And that’s an accurate measurement.


What time is it?

Listen to the radio:
WWV can be heard with any shortwave radio. A typical shortwave radio provides coverage from about 150 kHz to about 30 MHz. WWV broadcasts the time at 2.5, 5, 10, 15 and 20 MHz.

Go online:
The NIST Internet Time Service allows users to synchronize their computer clocks via the Internet. Most of the servers are in Boulder. The service requires a download that you can configure to access a specific server. Visit nist.time.gov to learn more.