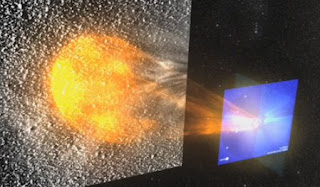 WASHINGTON -- Twin NASA spacecraft have provided scientists with their first view of the speed, trajectory, and three-dimensional shape of powerful explosions from the sun known as coronal mass ejections, or CMEs. This new capability will dramatically enhance scientists' ability to predict if and how these solar tsunamis could affect Earth.
When directed toward our planet, these ejections can be breathtakingly beautiful and yet potentially cause damaging effects worldwide. The brightly colored phenomena known as auroras -- more commonly called Northern or Southern Lights -- are examples of Earth's upper atmosphere harmlessly being disturbed by a CME. However, ejections can produce a form of solar cosmic rays that can be hazardous to spacecraft, astronauts and technology on Earth.
Space weather produces disturbances in electromagnetic fields on Earth that can induce extreme currents in wires, disrupting power lines and causing wide-spread blackouts. These sun storms can interfere with communications between ground controllers and satellites and with airplane pilots flying near Earth's poles. Radio noise from the storm also can disrupt cell phone service. Space weather has been recognized as causing problems with new technology since the invention of the telegraph in the 19th century.
NASA's twin Solar Terrestrial Relations Observatory, or STEREO, spacecraft are providing the unique scientific tool to study these ejections as never before. Launched in October 2006, STEREO's nearly identical observatories can make simultaneous observations of these ejections of plasma and magnetic energy that originate from the sun's outer atmosphere, or corona. The spacecraft are stationed at different vantage points. One leads Earth in its orbit around the sun, while the other trails the planet.
Using three-dimensional observations, solar physicists can examine a CME's structure, velocity, mass, and direction in the corona while tracking it through interplanetary space. These measurements can help determine when a CME will reach Earth and predict how much energy it will deliver to our magnetosphere, which is Earth's protective magnetic shield.
"Before this unique mission, measurements and the subsequent data of a CME observed near the sun had to wait until the ejections arrived at Earth three to seven days later," said Angelos Vourlidas, a solar physicist at the Naval Research Laboratory in Washington. Vourlidas is a project scientist for the Sun Earth Connection Coronal and Heliospheric Investigation, STEREO's key science instrument suite. "Now we can see a CME from the time it leaves the solar surface until it reaches Earth, and we can reconstruct the event in 3D directly from the images."
These ejections carry billions of tons of plasma into space at thousands of miles per hour. This plasma, which carries with it some of the magnetic field from the corona, can create a large, moving disturbance in space that produces a shock wave. The wave can accelerate some of the surrounding particles to high energies that can produce a form of solar cosmic rays. This process also can create disruptive space weather during and following the CME's interaction with Earth's magnetosphere and upper atmosphere.
"The new vantage point of these spacecraft has revolutionized the study of solar physics," said Madhulika Guhathakurta, STEREO program scientist at NASA Headquarters in Washington. "We can better determine the impact of CME effects on Earth because of our new ability to observe in 3D."
STEREO is part of NASA's Solar Terrestrial Probes Program in NASA's Science Mission Directorate in Washington. The program seeks to understand the fundamental physical processes of the space environment from the sun to Earth and other planets.
The Solar Terrestrial Probes Program also seeks to understand how society, technological systems and the habitability of planets are affected by solar processes. This information may lead to a better ability to predict extreme and dynamic conditions in space, and the development of new technologies to increase safety and productivity of human and robotic space exploration.
For more information about NASA's STEREO mission, visit: http://www.nasa.gov/stereo

April 14, 2009: This just in: The Sun is blasting the solar system with croissants.

Researchers studying data from NASA's twin STEREO probes have found that ferocious solar storms called CMEs (coronal mass ejections) are shaped like a French pastry. The elegance and simplicity of the new "croissant model" is expected to dramatically improve forecasts of severe space weather.
"We believe we can now predict when a CME will hit Earth with only 3-hours of uncertainty," says Angelos Vourlidas of the Naval Research Lab, who helped develop the model. "That's a four-fold improvement over older methods."
Coronal mass ejections are billion-ton clouds of hot magnetized gas that explode away from the sun at speeds topping a million mph. Sometimes the clouds make a beeline for Earth and when they hit they can cause geomagnetic storms, satellite outages, auroras, and power blackouts. The ability to predict the speed and trajectory of a CME is key to space weather forecasting.
"This is an important advance," says Lika Guhathakurta, STEREO program scientist at NASA headquarters in Washington DC. "From a distance, CMEs appear to be a complicated and varied population. What we have discovered is that they are not so varied after all. Almost all of the 40-plus CMEs we have studied so far with STEREO have a common shape--akin to a croissant."
Thousands of CMEs have been observed by NASA and European Space Agency spacecraft, but until now their common shape was unknown. That's because in the past observations were made from only a single point of view. The STEREO mission has the advantage of numbers. It consists of two probes that flank the sun and photograph explosions from opposite sides. STEREO's sensitive wide-field cameras can track CMEs over a wider area of sky than any other spacecraft, following the progress of the storm all the way from the sun to the orbit of Earth.
"STEREO has done what no previous mission could," notes Guhathakurta.
Vourlidas says he is not surprised that CMEs resemble French pastries. "I have suspected this all along. The croissant shape is a natural result of twisted magnetic fields on the sun and is predicted by a majority of theoretical models."
He offers the following analogy: Take a length of rope and hold one end in each hand. Start twisting the ends in opposite directions. Twist, twist and continue twisting until the middle of the rope is a fat knotted mess. "That's how CMEs get started—as twisted ropes of solar magnetism. When the energy in the twist reaches some threshold, there is an explosion which expels the CME away from the sun. It looks like a croissant because the twisted ropes are fat in the middle and thin on the ends."
The shape alone, however, does not tell the full story of a CME. The contents of the CME must be considered, too. How much plasma does it contain? What is the orientation and strength of its internal magnetic field? When a CME strikes, the havoc it causes will depend on the answers—answers the croissant model does not yet provide.
"There is more work to do. We must learn to look at a CME and not only trace its shape, but also inventory in contents," says Guhathakurta. "We are halfway there."
Eventually, the quest to learn what lies inside the croissant will be taken up by other spacecraft such as the Solar Dynamics Observatory, slated to launch in August 2009, and Solar Probe+, a daring mission (still on the drawing board) to fly close to the sun and actually enter these storms near their source.
STEREO isn't finished, though. The two probes are continuing their journeys to opposite sides of the sun for a 24/7, 360-degree view of the star. Along the way, they'll actually run into a few CMEs and have the chance to sample the 'croissants' in situ.